Skip to content
Go Home «» News «» Breaking News «» Drudge Report blasts Elon Musk on Twitter bans: Does he appear to be on drugs? 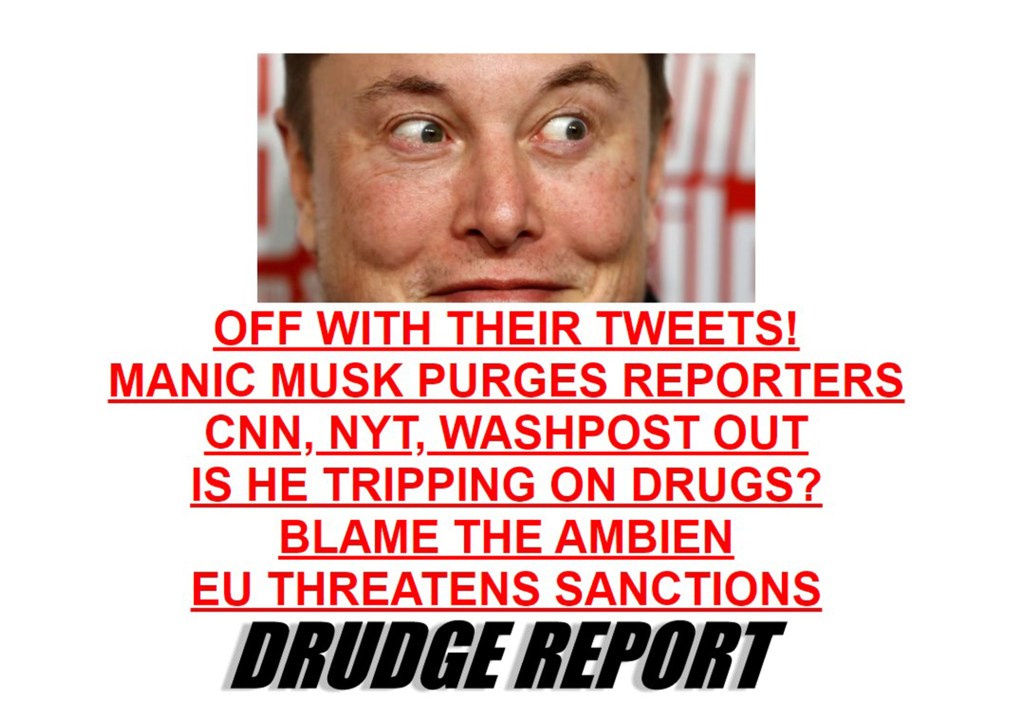 Drudge Report criticized Elon Musk for banning six journalists with a left-leaning bias from Twitter, and implied that the billionaire may have been under the influence of narcotics recently.

Matt Drudge lead his prominent news aggregation website on Friday morning with multiple articles about Musk’s controversial clampdown, which the tech mogul claimed was motivated by worries for his family’s safety.

Musk’s former usage of the anti-insomnia medication Ambien as well as the hallucinogenic chemical MDMA, or “ecstasy,” and the recreational drug psilocybin mushrooms was disclosed in two widely featured articles on Drudge’s website.

“Is he on drugs?” read the headline on the Drudge Report. It linked to an article on the tech news website Futurism that described a New York Times piece from October on Musk’s “occasional” recreational drug use.

The Times reported in October that Musk would attend parties where he and his associates would engage in “moderate exploratory voyages” that included recreational drug use.

According to the Times, Musk would frequently show his peers a chart demonstrating why MDMA and mushrooms are healthier than alcohol.

The Drudge Report’s homepage displayed an ugly photograph of Elon Musk and links to news articles concerning his prior drug use.

Drudge also linked to a 2018 CNBC article titled “‘Ambien tweeting’ Is Becoming a Popular Excuse, Since It Can Cause Bizarre Side Effects.”

The CNBC article included a New York Times interview in which Musk acknowledged to using Ambien to fall asleep.

Musk told the Times in 2018: “Often, the decision is between no sleep and Ambien.”

Musk was allegedly on the point of tears during that conversation as he described the previous year as “the most stressful and terrible” of his career.

At the time of the interview, Musk was under criticism from investors in his electric vehicle firm, Tesla, who were angered by a tweet about taking the company private for $420 a share.

The Securities and Exchange Commission filed a lawsuit in response to his tweet about taking Tesla private.

Ambien, an anti-sleep aid developed by the multinational pharmaceutical company Sanofi-Aventis, “may cause some people, especially the elderly, to become drowsy, dizzy, lightheaded, clumsy or unsteady, or less alert than usual, which may result in falls,” according to the Mayo Clinic.

According to the National Institutes of Health, MDMA users commonly experience confusion, melancholy, anxiety, paranoia, and memory and attention deficits.

Psilocybin mushrooms, sometimes known as magic mushrooms, are hallucinogens growing in tropical and subtropical regions of South America, Mexico, and the United States.

According to Canadian health experts, there is a risk that high doses could develop paranoia, loss of boundaries, and a warped sense of self, despite the drug’s demonstrated efficacy in treating depression.

Musk, who disbanded Twitter’s media relations department upon assuming control of the company in late October, was unavailable for comment at the time of writing.

He asserts that the decision to bar media was based on their purported “doxxing” of his particular location. Musk has also banned Jack Sweeney, the Florida college sophomore who watched the tech mogul’s private plane flights using the Twitter account @Elonjet.

»Drudge Report blasts Elon Musk on Twitter bans: Does he appear to be on drugs?«