It’s the fourth time that remains have been discovered since May, as Western dryness drives the coastline of the Colorado River reservoir below the Hoover Dam to recede.

Rangers were sent to the reservoir between Nevada and Arizona at 11 a.m. Saturday after bone remains were found near Swim Beach, according to National Park Service authorities.

Rangers and a diving crew from the Las Vegas Metropolitan Police Department proceeded to remove the corpses.

According to Park Service authorities, the Clark County Medical Examiner’s Office will attempt to identify when and how the individual died while detectives examine missing persons data.

A barrel containing human bones was discovered at Hemenway Harbor on May 1. Police suspect the bones belonged to a guy who died as a result of a gunshot wound and were likely abandoned in the mid-1970s to early 1980s.

On July 25, fragmentary human remains were discovered in the Boulder Beach area.

More remains may be recovered as Lake Mead’s water level continues to decrease, according to police.

The finds have sparked suspicion about long-unsolved missing person and murder cases spanning back decades, all the way back to organized crime and the early days of Las Vegas, which is just a 30-minute drive away from the lake.

A sunken boat from World War II has also been discovered under the shallow seas.

Since the reservoir was filled in 1983, the lake’s surface has decreased more than 170 feet.

The United Nations issued a warning last week that water levels in Lake Mead and Lake Powell are at their lowest ever and dangerously close to “dead pool status.” This status indicates that water levels are so low that water cannot flow downstream to generate hydroelectric plants.

NASA revealed satellite photographs of Lake Mead’s drastic changes between 2000 and 2022 last month, as its water level has hit its lowest point in more than 85 years.

The reduction in lake level occurs at a time when the great majority of peer-reviewed research indicates that the planet is warming, owing mostly to increased amounts of carbon dioxide and other greenhouse gases in the atmosphere.

According to scientists, the United States West, particularly the Colorado River basin, has gotten warmer and drier during the last 30 years. 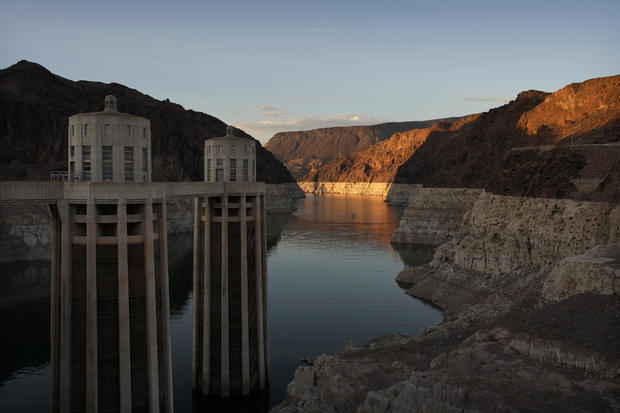