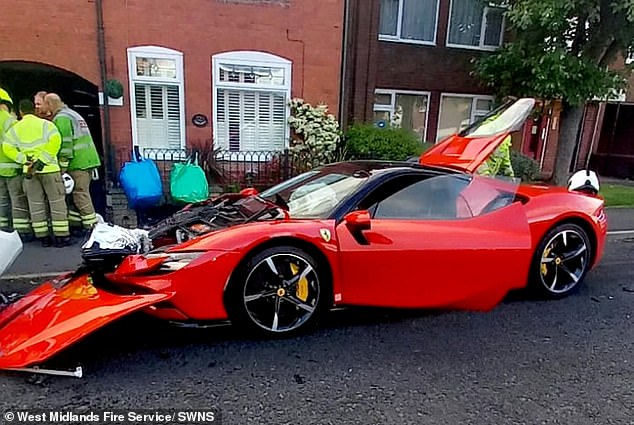 Police are looking for the driver who slammed a £500,000 Ferrari supercar into a line of parked cars.

The highly damaged Ferrari SF90 after it was involved in a collision with five parked vehicles in Halesowen, near Birmingham, according to photos.

Emergency services spotted the luxurious Italian automobile on Wednesday night, which can reach speeds of up to 211mph and was previously deemed the ‘quickest car of the decade’ by MotorTrend.

The driver of the vehicle was not present at the scene, according to the fire service, and police say they are now attempting to locate them.

Pictures show how the front end of the vehicle, which can accelerate from 0-124mph in 6.7 seconds, was left a crumpled mess, while bits of the car can also be seen strewn over the road.

Nobody is believed to have been injured in the collision which happened on Hagley Road in Halesowen – an area to the south west of Birmingham – at around 7.40pm.

Are you the Ferrari’s owner?

A spokesperson for West Midlands Police said: ‘We’re investigating after a red Ferrari hit a number of parked cars in Hagley Road, Halesowen last night (Wednesday) at around 7.40pm.

‘Officers attended and found the vehicle had been abandoned and no injuries were reported to us.

‘We made a search of the area and spoke to a number of witnesses but were unable to locate the driver.

‘The car has been seized and our work to identify and trace the driver continues.

‘Anyone with information can message us via Live Chat at west-midlands.police.uk, quoting log 3595 of 25 May, or call 101.’

‘Please be careful when out and about.’

One social media user replied: ‘Obviously too powerful for somebody to handle.’

Another added: ‘Looks nasty, how gutted would you be?? Hope everyone is ok.’

A third wrote: ‘That’s gonna cost some serious money to put right.  I’d be devastated, that car cost more than my house.’

West Midlands Fire and Rescue Service said the driver had left the scene by the time crews arrived.

A spokesman said: ‘Shortly before 7.45pm on Wednesday 25 May we responded to Hagley Road, Halesowen, where a car had been in collision with five parked vehicles.

‘The driver of the car had left the scene before we arrived. We made the vehicle safe and left the incident in the hands of the police at 8.45pm.’