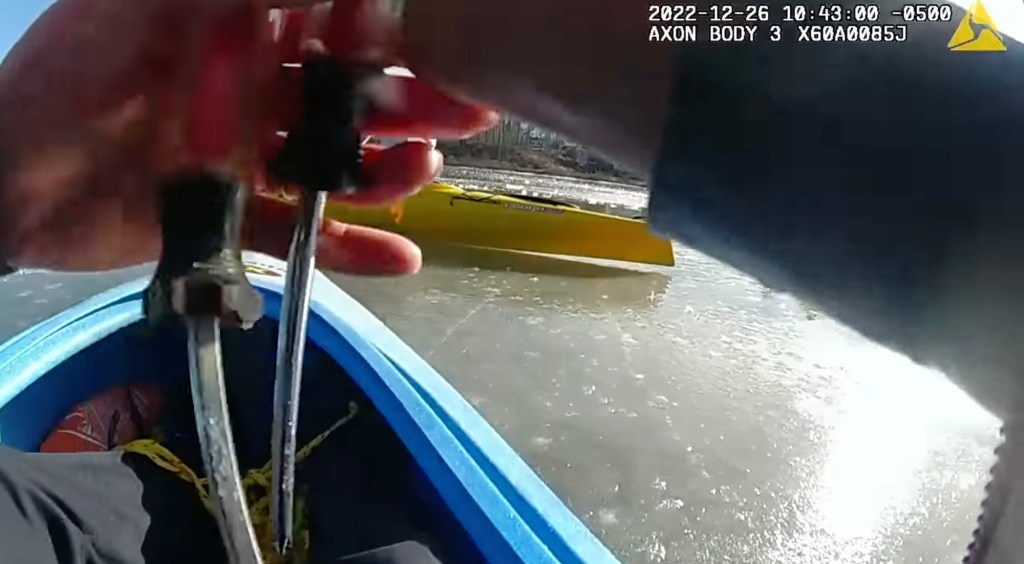 A 71-year-old pilot was rescued by a police officer from Maryland who leapt into a kayak and used two screwdrivers to drag herself across an ice-covered river.

The video shows Anne Arundel County Police Officer Elizabeth Myers grabbing a kayak and using screwdrivers as oars to paddle to the plane wreckage on Beards Creek on December 26.

“On ice, only screwdrivers are effective,” the department stated in a press release.

NBC Washington reported that Steve Couchman of Prince Frederick, Maryland was the lone person aboard the single-engine Piper Cherokee that crashed shortly after departure from Lee Airport.

In the video, Myers can be seen frantically jabbing the tools into the ice to pull herself toward the plane while she forcefully exhales from exertion.

When she arrives, two other kayaks are already supporting Couchman, who was able to exit the aircraft and stand on its wing.

The pilot was then transferred to the Anne Arundel Medical Center for treatment of non-life-threatening injuries, according to officials.

According to reports, officers from the Maryland Department of Natural Resources Police also responded on a boat.

Fire Lt. Jennifer Macallair of Anne Arundel County Fire and EMS stated that the pilot’s life was likely spared since he was at risk of hypothermia.

“With temps in the 30s, hypothermia can develop in a matter of minutes.” According to WUSA, she stated that their swift measures had a favorable impact on the current situation.