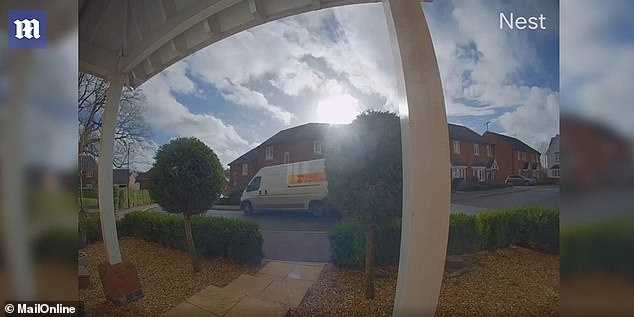 This is the dramatic moment in which a DHL driver desperately pursues his van after it skidded down the road while he was delivering a package.

After realizing that his van was speeding away, the unfortunate driver dons a high visibility jacket and chases after it.

Last Thursday, the event occurred on Ashby Road in Derby and was filmed by the camera doorbell of a home nearby where the package was being delivered.

A witness who did not wish to be identified stated, “I heard a big explosion and ran out of my house.”

It was an utter massacre.

Ashby Road is a long, house-lined, hilly main road, which led the van to slide down it at a high rate of speed.

It is unknown what type of package the delivery driver was transporting, although witnesses described it as “bulky.”

One added, “It was evident that the driver had not engaged the handbrake.” I attempted to ask him about it, but he spoke little English. He stood there with a dumbfounded expression, wondering what was going on. The police were contacted, but the driver’s supervisor also arrived, and the vehicle was ultimately towed away.

He continued, “When we viewed the video, it was like something out of a Carry On film, with the driver chasing his vehicle. However, the event is fairly grave because someone may have been murdered.

“The driver’s behavior was incredibly unprofessional, and it makes me wonder what kind of individuals DHL hires.”

The incident occurred last Thursday on Ashby Road in Derby and was captured on video doorbell camera.

After realizing that his van was speeding away, the high-visibility jacket-clad driver chases after it.

Residents at the scene of the accident were advised that the van was from a DHL depot in Nottingham that often delivers to houses and businesses along Ashby Road.

Every day, an estimated 100,000 DHL vehicles carry millions of items to homes and companies around the United Kingdom, but this is not the first time they have been mired in controversy.

An inquest in Derby heard about the death of a DHL driver in a crash that was likely caused by his falling asleep at the wheel.

Arron Middleton, 31, was nearing the conclusion of his shift as an HGV driver on the A50 in Derbyshire when he collided with stopped traffic.

Mr. Middleton was returning to the East Midlands Airport depot at the time of the incident when he drove his car into the rear of a line of stalled vehicles.