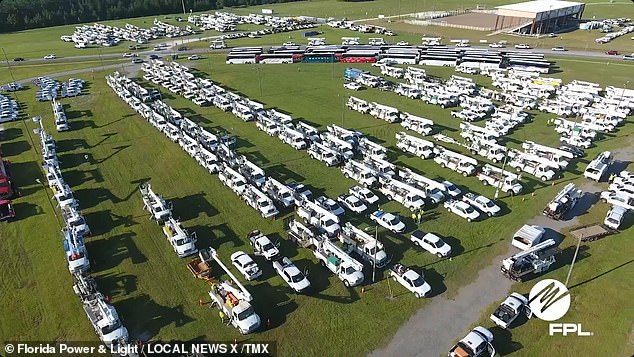 Dramatic footage shows hundreds of utility trucks preparing to help people in need as countless Floridians plead for the restoration of their electricity.

After Hurricane Ian tore through Florida, over 40,000 line workers are prepared to assist with the millions of homes and businesses without electricity.

More than 2.7 million households and businesses in Florida were left without electricity, with 12 counties having the majority of those without power.

Between Miami and the devastated Fort Myers, where authorities have reported hundreds of casualties, sits Shawnee, where the trucks in the video were being readied.

Florida Power & Light, which supplies the majority of the homes and businesses experiencing power outages, predicted ‘widespread, lengthy outages from Hurricane Ian’ in a tweet on Wednesday.

The corporation has made available a video of a fleet of white utility vehicles getting ready in Lake City, Florida. In order to get the line workers to the afflicted locations, the movie also shows buses that are stationed with utility vehicles.

In a statement accompanying the video, the business said that they were “ready to carry out our tested strategy to restore electricity safely and as soon as practicable.”

As the storm’s eye started to approach the state on Wednesday and throughout the night into Thursday, the number of reported outages sharply increased.

About 660,000 people had power outages as of Wednesday afternoon at 2:30, but two hours later, the number had topped 1 million. By 10 p.m., there were 2 million without electricity, and as of Thursday, sources showed the number had risen to almost 2.5 million.

More than 30,000 linemen were “positioned and ready” to assist, according to Florida Division of Emergency Management Director Kevin Guthrie on Wednesday. Later, Governor Ron DeSantis said that the number had increased to 42,000.

According to experts, the damage from Hurricane Ian might cost up to $260 billion, and rescuers said they are just “scratching the surface,” DeSantis referred to the widespread flooding as a “once in a 500-year” catastrophe.

Southwest Florida accounted for the majority of the disruptions, with counties like Hardee, Charlotte, and Lee reporting that almost all of their citizens are now experiencing power outages.

Though some regions fared better, every county on the state’s east coast had outages; nonetheless, Miami-Dade residents have already begun to see power restoration.

While the precise duration of the outages for Florida residents is unknown, National Weather Service director Ken Graham predicts it will take the storm 24 hours to pass across the state.

This storm will be remembered for many years to come, he continued.

As social media users raved over the “heroes” and “patriots” preparing to aid the devastated houses and families, the video quickly gained popularity on Twitter.

One tweet in response said, “Thx to all these terrific folks,” while another stated, “We will, regrettably, need every one of them.” A resident of Florida added, “As I sit in a dark home in a pitch black neighborhood, I’m glad for every one of them.”