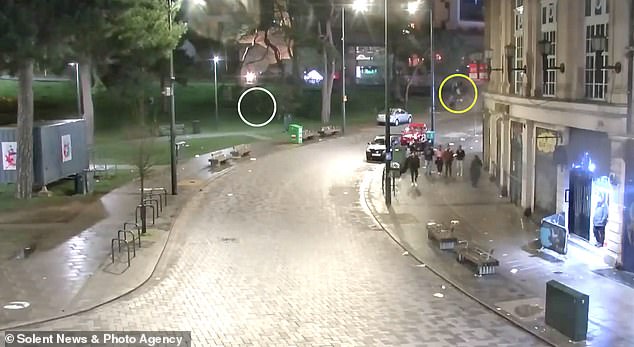 A court was told that this is the scene of the alleged stabbing death of a prospective Royal Marine during a dispute over an electric scooter by a balaclava-clad asylum seeker who was attempting to flee the area.

Outside a Subway sandwich shop in Old Christchurch Road, Bournemouth, in the wee hours of March 12, 2017, Afghan national Lawangeen Abdulrahimzai, 21, twice stabbed Thomas Roberts in the chest with a “10cm blade.”

During their journey home from a “very chilled” night out, Abdulrahimzai and Mr. Roberts’ close friend James Medway, 24, got into a fight over an e-scooter, Salisbury Crown Court was told.

Jurors were informed that Mr. Roberts, 21, was stabbed twice in the chest by a “aggressive” Abdulrahimzai just moments after getting involved in the argument, with one stab wound going straight through his heart.

Abdulrahimzai, who initially attempted to claim he was only 16 years old, now admits manslaughter but continues to deny killing Mr. Roberts. He is anticipated to claim that he had a “loss of control” in his actions.

CCTV footage shown to the jury today captures Abdulrahimzai fleeing on foot as Mr. Medway pursues him right after the stabbing.

Abdulrahimzai can be seen’very quickly’ sprinting to a neighboring park while wearing his hood up.

Abdulrahimzai was lost to Mr. Medway, 24, who had to run barefoot after his trainers came off.

Jurors today also heard 999 calls made at around 4.40 a.m. on March 12 outside Subway, just a short time after the alleged murder.

Abdulrahimzai was running very quickly, according to a woman who saw him while withdrawing money from an ATM.

Others pleaded with emergency call handlers to dispatch an ambulance right away because Mr. Roberts was rapidly losing blood and “is going to die.”

Before the stabbing, Abdulrahimzai allegedly headbutted another man while donning a balaclava.

In Salisbury Crown Court testimony, reveler Alfie Goulty claimed that after being turned away from a club in Bournemouth, he struck up a conversation with Abdulrahimzai, a stranger to him.

When Abdulrahimzai entered the conversation and started acting “aggressively” toward the other male, Mr. Goulty, 18, was engaged in a verbal argument with another partygoer.

“The person who joined was wearing a coat and balaclava, which was not completely on,” he claimed.

He was simply repeating my instructions to leave, I said. He gave him a headbutt-like motion with his head, nudging him aside.

It was somewhat combative,

Following the conclusion of their verbal argument with the other man, Mr. Goulty claimed he continued speaking to Abdulrahimzai, who revealed to him that he was 16 years old.

Later, when he emerged from Subway, he observed Mr. Roberts “bleeding heavily” and people calling for an ambulance.

Mr. Roberts’ condition was deteriorating, and it was obvious that he was not breathing, according to Dorset Police officer Steve Bowes, one of the first responders on the scene.

In yesterday’s proceedings, Mr. Medway told the jury that when Abdulrahimzai pulled out a 10 cm blade and twice stabbed his friend in the chest, he “sh** himself.”

When Mr. Roberts and Mr. Medway, both 24, tried to use the E-scooter to get home after a fun night out, ‘aggressive’ Abdulrahimzai, 21, confronted them.

A court has told Mr Roberts, a nightclub DJ who intended to join a Marine, had major internal injuries including a wound to his heart from the stabbing.

Distressing CCTV video of the incident outside a Subway sandwich restaurant shows Mr Roberts attempting to remain on his feet but falling seconds later.

Following the stabbing, Mr Roberts, from Bournemouth, was brought to hospital having ‘bled profusely’ and died in the operating theatre.

Giving testimony at Salisbury Crown Court, Mr Medway talked of the moment he watched his ‘peacemaker’ buddy being stabbed.

Mr Medway said: ‘I had known him for two and a half years, during the years we grew to know one other well.

‘We had many things in common, like biking, then I began attending to his DJ events and he took an interest in the gym.

It was a pleasant, laid-back evening. We were enjoying a few drinks and having a good time.

We made the decision to get some food, get a taxi, and travel back home. We were at ease and eager to eat and go to sleep.

“We chose to walk in the direction of the taxi rank, and at Subway there was a scooter that was unlocked and said to him “don’t worry mate, we can take this time, we don’t need a taxi”.”

He claimed that he was then confronted at this point.

I was holding the handles and standing on either side of the scooter when Abdulrahimzai came over, the speaker continued. He was someone I had never met.

He spoke in a slurred, difficult-to-understand form of English.

“Get off this scooter, this is my scooter,” he yelled from in front of me, acting belligerently. He posed a threat.

There is no issue here, Tom said while extending his arm across his chest. He was soothing, attempting to diffuse the situation, and to calm the situation.

The man confronted Tom after shifting his attention to him. He faced Tom head-on. Due to the broken English, I am unsure of what was said.

Tom felt insecure. On the back foot, he was. Mr. Roberts slapped Abdulrahimzai in the face with his open palm, which I took to be a warning—a “stay away” warning.

As soon as he reached for the knife, the man lunged at Tom.

It was large and, as far as I can tell, was made of gold and black. His gesture resembled a long hook.

“I s**t myself at first; I don’t know if I went to punch him with my left hand because I was so scared. And he started to run.

“I punched Tom on the shoulder and asked, “Are you okay?” before chasing after the man because I didn’t realize he had been hit.”

Mr. Medway claimed that after Abdulrahimzai took off his shoes, he pursued him barefoot but lost sight of him in a nearby park.

He continued by saying that he and Mr. Roberts had simply been looking for a way home.

The prosecution’s opening statement to the jury described the incident as a “fatal encounter all about a scooter that has cost this boy his life.”

Thomas served as a mediator between the two men, he continued. He sustained two stab wounds as a result of his actions.

The murder was denied by Poole, Dorset resident Abdulrahimzai. The two-week trial has not ended.