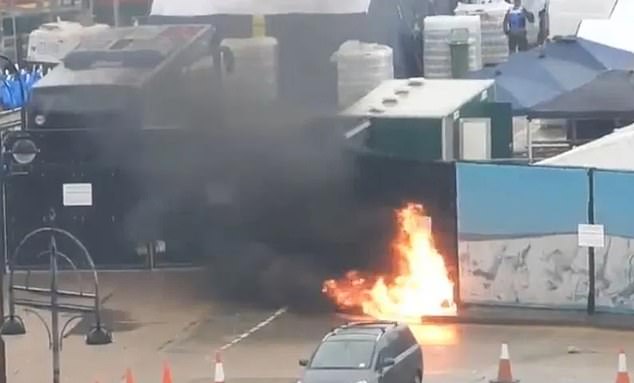 Today, a guy tossed petrol bombs with linked pyrotechnics at a migrant processing center at the port of Dover before committing suicide, according to witnesses.

The assailant, a white male wearing a striped shirt, arrived to the center in a white SEAT SUV.

A photojournalist reported that he exited his vehicle and tossed three petrol bombs, one of which did not detonate.

According to reports, he then went to a neighboring gas station and committed suicide there. Minutes later, police arrived and blocked off the area.

The event occurred after around 1,000 migrants crossed the English Channel and arrived in the United Kingdom on Saturday.

A spokesperson for the Home Office stated, “We are aware of an incident at Western Jet Foil in Dover, and police are on the scene.” It would be inappropriate at this time to discuss further.’

At 11:22 a.m., Kent Police were summoned to The Viaduct, where “two to three incendiary devices” had created a fire.

The Kent Fire and Rescue Service verified that its workers had extinguished fires. Nathalie Elphicke, the Conservative representative for Dover, expressed disbelief.

Yesterday, about one thousand migrants crossed the English Channel and entered the United Kingdom through the port, according to government statistics.

At the Border Force facility in Dover, Kent, long lines of people believed to be migrants waited to be processed as a total of 990 individuals arrived.

Nearly 40,000 have landed in the UK so far this year after undertaking the perilous journey from France in dinghies and other tiny boats, traversing the world’s busiest maritime channels.

It is the biggest number of daily arrivals in in weeks, with more crossings occurring on Sunday morning.

The greatest daily total was on August 22, when 1,295 persons entered the country.

It comes after an immigration watchdog said he was rendered “speechless” by the conditions at the Manston migrant processing station in Kent and warned that the location has already crossed the point of no return in terms of safety.

David Neal, chief inspector of borders and immigration, told members of parliament earlier this week that Manston was designed to accommodate between 1,000 and 1,600 individuals, but there were 2,800 people at the site on Monday, with more arriving.

The disclosures prompted the Refugee Council to demand “immediate” action and request a meeting with ministers to discuss strategies for addressing the issues.

The short-term holding facility, which opened in January, is intended to house migrants for 24 hours while they undergo checks before being transferred to immigration detention camps or asylum lodging – now hotels.

The Sunday Times claimed that Home Secretary Suella Braverman was accused of neglecting to act on legal advice obtained at least three weeks ago that warned migrants were being unjustly imprisoned for extended durations.

A representative for the Home Office stated, “The Home Secretary has taken immediate action to alleviate problems at Manston and find alternative housing.” The assertions that counsel was willfully disregarded are without merit.

“It is proper that we consider all options so that judgments can be made based on the most recent operational and legal guidance.”

The RNLI has released distressing footage of what its crews can face when they rescue migrants crossing the Channel. pic.twitter.com/9X3avYO9ZO

The number of migrants coming in the United Kingdom through tiny boats has reached a record high, putting great pressure on our asylum system and costing the British government millions of pounds per day.

Michael Gove, a Cabinet minister, described the situation at Manston as “very disturbing,” although he claimed that the Home Secretary ignored or disregarded legal counsel.

“The situation in Manston is not acceptable,” he told the Sophy Ridge On Sunday program on Sky News.

“Everyone agrees with that. There are currently around 2,000 persons present.’

The Liberal Democrats have asked the government to release the legal advice that Ms. Braverman allegedly disregarded.