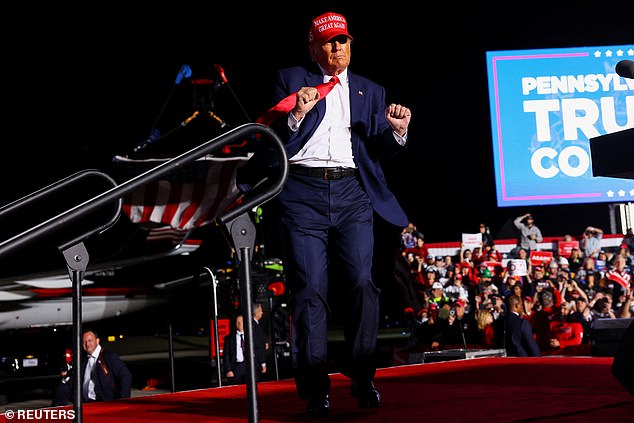 The Sunshine State is preparing for a political struggle on Sunday, which could pave the way for a chaotic primary election in 2024.

On Sunday evening, Donald Trump will hold his third rally of a four-state swing, preparing to take the stage in Miami, Florida just two days prior to Election Day.

In the meantime, Florida Governor Ron DeSantis will visit three distinct counties for his own speaking engagements, but will avoid Trump in Miami-Dade.

At 5 p.m., the former president is scheduled to address. after a parade of Republican colleagues had warmed up the crowd.

DeSantis was notably missing from the event, which was not unexpected considering the deteriorating relationship between the rising star of the Republican Party and its de facto leader.

At his second of four rallies on Saturday night in Pennsylvania, Trump insulted DeSantis as “Ron De-Sanctimonious” while dismissing a list of potential Republican opponents in 2024.

The popular Republican governor has refrained taking public jabs at Trump, presumably conscious of how linked their supporters are, but has not ruled out the prospect of opposing him in 2024.

His unwillingness to doing so has rankled Trump, who has largely taken credit for DeSantis’ climb to political celebrity from being just another House Republican to winning a close contest for the Tallahassee governor’s mansion in 2018.

On Sunday, while Trump is in Miami, DeSantis will hold three rallies closer to Tampa.

More recently, though, DeSantis gained national prominence for his outspoken criticism of the Biden administration’s COVID-19 measures and other attacks, as well as legislation aimed at LGBTQ kids.

The great majority of early 2024 GOP voter polls have put DeSantis just behind Trump in terms of who Republicans desire as their next presidential contender.

Trump has not yet formally declared his intention to run for president, but he has dropped several hints indicating his political leanings.

The former president stated on Saturday evening, ‘We are winning the Republican nomination like anyone has ever seen’

He requested that the poll figures be displayed on the screen above him.

Trump said sarcastically, “There it is, Trump at 71, Ron DeSanctimonious at 10 percent.”

»Don vs. Ron! Trump and DeSantis battle in Florida«