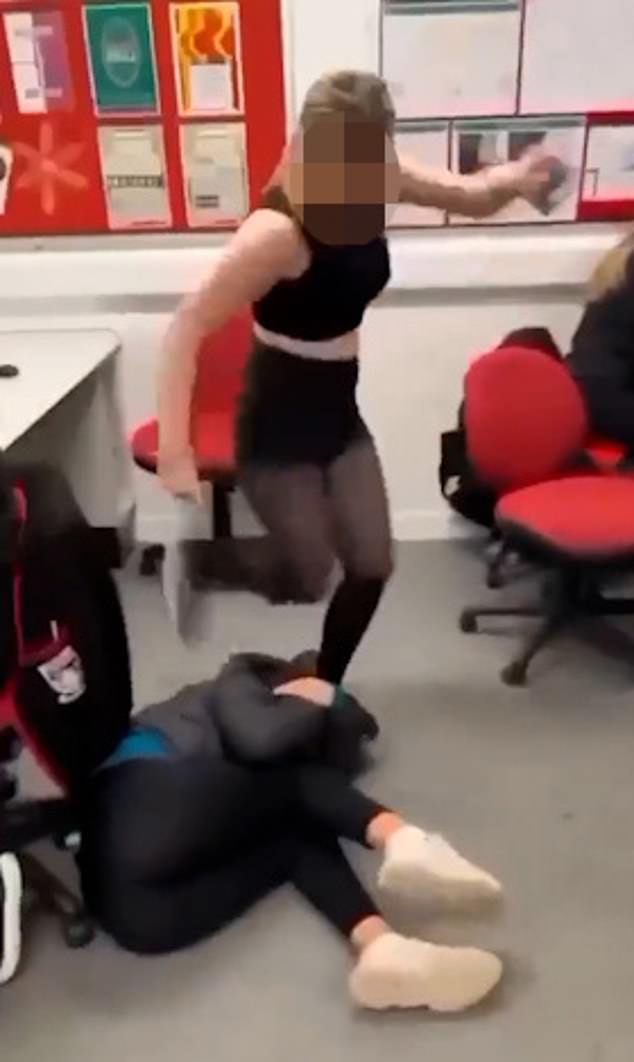 In the middle of the classroom, a Scottish schoolgirl is repeatedly punched and kicked in the head.

On Monday, the incident occurred in front of shocked students at the Waid Academy in Anstruther, a coastal town in Fife.

A student is filmed leaving her seat and storming towards a classmate before dragging her to the ground.

The female is then shown holding the student’s head to the ground is pounding her with the other arm.

The 15-second video also shows the girl standing over the student and kicking her twice in the head, causing the student to cover her face.

However, the girl’s parents told The Courier that their daughter snapped after being subjected to months of school-sanctioned bullying that was permitted to escalate.

Meanwhile, footage of the event has been widely circulated on social media, and First Minister Nicola Sturgeon was questioned about it yesterday at Holyrood.

Willie Renny, Lib Dem MSP for North East Fife, stated, “I viewed a social media footage of a female student assaulting another at Waid Academy in my district last night.

“It was a dreadful scene. Heather Hughes, the then-president of the Educational Institute of Scotland (EIS), issued a warning earlier this year about the rise in school violence.

Locally, I’m supporting the staff, the council, and the school, but what national measures is the government taking?

Ms. Sturgeon responded, ‘I have not watched the video that he mentions, but I will watch it if it is accessible, as I believe it is crucial that we have a complete awareness of such matters.

“Violence is never acceptable, and the safety of students and faculty is of utmost importance.”

‘Obviously, I am unable to speak further today on the circumstances of the matter at Waid Academy, but violence against anyone is abhorrent.

The girl strides at another student before dragging her to the classroom floor by her hood.

The student is depicted lying on the ground and attempting to hide her head while she is brutally pounded and kicked.

She said, “We will continue to thoroughly consider what additional steps we can take to support councils in making it abundantly clear that violence is unacceptable and in taking action to support children, young people, and teachers who may be subjected to such violence.”

Following the session, former Fife councillor Linda Holt posted the video on Twitter with the following message: ‘Thank you Willie Rennie for bringing up the recent horrible violence witnessed at #FMQs.

“Nicola Sturgeon expressed interest in viewing the video. Here it is.’

In a subsequent tweet, she elaborated: “The point is that this is not an isolated incident, even if it is extreme.”

There is a bullying and, yes, violent culture in many of our schools.

They stated, “Violence is disturbing and nasty in any setting, but at a place where minds should be focused on progress and learning, it is extremely worrying.

In recent weeks, we have heard directly from parents regarding their concerns regarding student behavior.

“We have been in contact with the local authority and the school to ensure that school administrators are taking all the necessary steps to defuse the situation and to offer our support.”

We will hold other sessions over the following several days, as well as months, because this issue requires a long-term perspective.

Young people deserve the greatest educational atmosphere free from fear of violence, and we will do everything in our power to ensure that this is the case at Waid Academy.

According to reports, police have contacted the school and are investigating two incidences.

The school’s principal has issued a letter to parents in response to the occurrence.