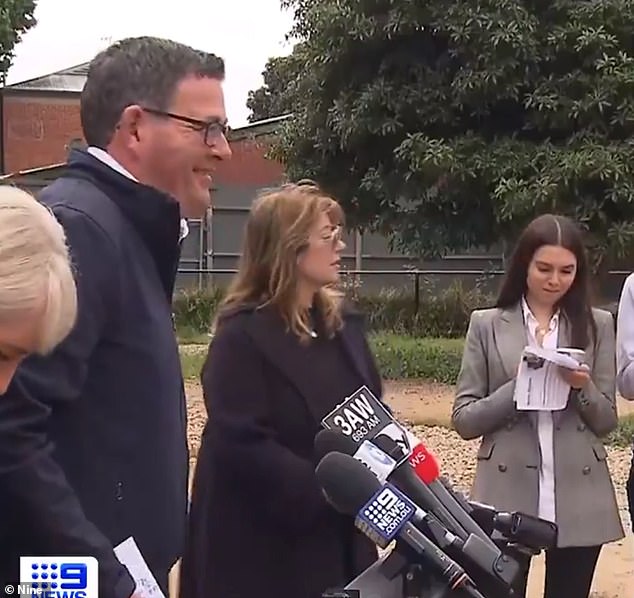 During a press conference held on the second day of the state’s election campaign, a dissatisfied voter called Premier Daniel Andrews a “disgrace.”

On Friday, Mr. Andrews was about to address the waiting media when a middle-aged guy walking behind the group exclaimed, “You’re a disgrace!”

The prime minister glanced momentarily in the direction of the man before asking the assembled journalists, “Ok… are we ready to go?”

The individual was observed gazing at the prime minister before leaving.

Another man heckled the prime minister as he approached his campaign bus.

The Herald Sun claimed that a demonstrator addressed Mr. Andrews, “Why are you fleeing?”

“May I board the bus with you?” I hope neither he nor his wife are driving.’

Mr. Andrews was again joined by his wife Cath, who was questioned about Ryan Meuleman, the 15-year-old cyclist involved in an accident with the Andrews’ family automobile in Blairgowrie, Mornington Peninsula, in January 2013.

Mr. Meuleman said that he never obtained “justice” for the occurrence and that Mr. Andrews and his wife were slow to assist him following the accident.

The prime minister refused to answer questions on the subject, stating, “I’ve addressed these topics in great detail and have nothing else to offer.”

During Friday’s press conference, his wife, who allegedly was driving the automobile at the time of the collision, was questioned about the incident.

Mrs. Andrews said, “I don’t know if you’ve ever been involved in an accident like this before.”

“It was a horrific occurrence. It was traumatic for all those concerned.

Our children were quite young, with Joseph being only five years old.

In response to further questions regarding the incident, she stated, “This really terrible event occurred ten years ago, therefore I have nothing further to contribute.”

Mr. and Mrs. Andrews posted on social media on Thursday to celebrate the opening day of the election campaign. On November 26, Victorian voters will go to the polls, where Mr. Andrews will seek a third term as premier.

“Day one of the campaign, with my number one,” Mr. Andrews wrote in his post.

Commenters generated both praise and criticism in response to the posts.

Please spare us, answered one person.

“Your number one will be the first to express sympathy for your loss,” remarked another.

Another user added, “On world record pace for the most pointless “look at me” tweets.”

A woman reacted, “Good luck to both of you!” while another said, “Great photo, Cath!”

At the November 26 election, it is anticipated that Victorians will once again favor his Labor team over opposition leader Matthew Guy’s Coalition lineup.