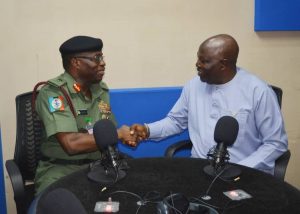 The newly appointed Director, Defence Information, DDI, Major General Benjamin Olufemi Sawyerr, says it is necessary for Nigerians to appreciate the selfless sacrifices of the men and women of the Armed Forces of Nigeria, AFN, towards ensuring peace and unity of the Nation.

This according to him, will be possible if the Nigerian media continues to project the image of the Armed Forces of Nigeria positively, with the aim of changing the negative perception especially following the security situation in the country.

He noted that the media is a very powerful instrument that coordinates all the elements of national powers to bring about national development, and urged the media to continue to support and cooperate with the military through positive coverage and reportage of its activities so as to move the country in the path of peace and progress.

Major General Sawyerr who was speaking when he visited some federal media organisations, appreciated the great work the media is doing adding that whenever the media is against a state, the end result is that the state will fail.

He said the concerted efforts of the AFN, has led to the mass surrender of Boko Haram terrorists and called on Nigerians to support the initiative that has taken years to build, occasioned by the successes being witnessed in recent days.

While responding, the DG FRCN, Dr Mansur Liman expressed readiness to continue to support and promote the operational engagement and activities of AFN in order to avail Nigerians the opportunity to better understand and appreciate what the military is doing in the defence of the nation, especially in the North East and other areas with security challenges.

In his remarks, the DG VON, Mr Osita Okechukwu enjoined the citizens to give the military their support and cooperation towards restoring peace and security to the country. He further assured the DDI that VON would use the station’s wide coverage to project the image of the military both at home and in the diaspora.

The President of the Nigeria Institute of Public Relations, NIPR, Mallam Mukhtar Zubairu Sirajo assured the AFN of the Institute’s readiness to partner and support them in the dischargie of their constitutional duties to the citizens and the nation at large.