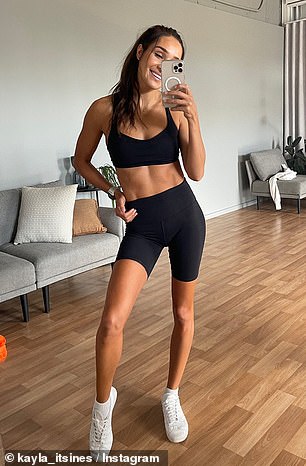 Kayla Itsines’ online fitness business Sweat has hit turbulence, with an estimated 30 employees poised to lose their jobs at the company’s headquarters, as the pregnant workout queen promotes the app to her 15 million Instagram followers.

Last year, the 31-year-old mother sold her digital training platform to the American company iFit for $400 million, following a surge in home exercise when gyms and sports centers shuttered due to the Covid pandemic.

Itsines continues to represent the brand and participate in commercial operations.

Prior to the sale to iFit, the Adelaide headquarters had around 100 employees; however, according to the Advertiser, that number is going to reduce to 45.

A company spokesperson would not disclose exact figures, but she did state that the company would be cutting costs and laying off employees.

She told the publication, “Sweat, along with others in the digital fitness business, has seen recent headwinds due to changes in customer demand and the consequences of gyms returning to pre-pandemic operating levels as pandemic restrictions have lifted.”

Following the study, there will be modifications to our organizational structure that will result in layoffs throughout the organization.

“Sweat is currently engaging with affected employees, and these discussions will conclude next week.”

The representative stated that the choice to reduce workers was “tough,” but ultimately “essential” to improve the company’s performance.

The company’s major market is the United States, although it was reported last year that subscription revenue decreased by 16 percent in the 2020-21 fiscal year, resulting in a loss of $9.5 million.

Itsines continues to market Sweat to her 15.2 million Instagram followers while extremely pregnant.

Sunday, she published a video in which she expressed her eagerness to return to burpees, skipping, pushups, squats, jump lunges, tricep dips, and ab bikes following the birth of her child in January.

She tagged Sweat in the post and used a number of hashtags connected to Sweat.

She uploaded a video of herself following the app while performing a leg workout on Friday.

According to an Instagram post by P.E Nation, the line was “inspired by Kayla’s fast-paced routine and designed to fit into every area of your day.”

This month, the Daily Mail Australia reported that P.E. Nation, another beneficiary of the pandemic, terminated at least four employees from its headquarters.

Itsines and her ex-partner Tobi Pearce developed the original version of Sweat in 2015. It was formerly known as the Bikini Body Guide fitness program.

Even after they divorced in 2020, Pearce remained her business partner until he departed the company in February of this year.

She has a daughter with Pearce who is three years old, and she is expecting her first child with Jae Woodroffe.