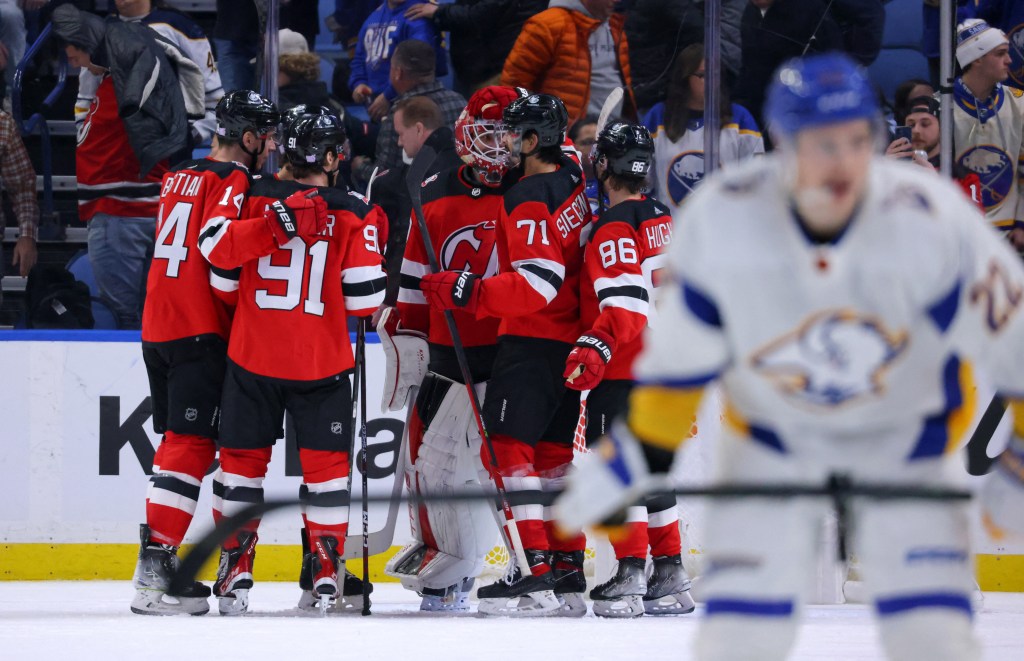 Lindy Ruff, coach of the New Jersey Devils, stated, “We discussed avoiding consecutive losses.” In addition, I believe we had an excellent team effort.

The Devils’ road win streak is tied for the second-longest in franchise history, and their November record of 11-1-0 is the most victories they’ve ever recorded in a single month.

Erik Haula, who assisted on the Devils’ opening goal and created the scoring opportunity with a poke check in the defensive zone, stated, “We had a tremendous start.” “Great O-zone pressure. We were able to get puck possession and cause several turnovers. We blew a few opportunities, but I felt we had tremendous intensity.”

The Devils celebrate their 3-1 victory against the Sabres.

Akira Schmid, the backup goaltender for New Jersey, made 31 saves and moved to 4-0-0 on the season. As a rookie last season, the Swiss 22-year-old lost each of his four starts.

The Devils’ defense held down a Sabres offense that had scored 13 goals in successive triumphs after an eight-game losing streak.

Jack Hughes, who previously scored, takes a shot during the third period of the Devils’ victory.

Don Granato, coach of the Buffalo Sabres, remarked, “They’re playing with a lot of confidence right now.” I believed that their defense was quite dominant early on.

New Jersey scored three goals in the second period and, in 21 games, has outscored opponents 30-20 in the period.

Two minutes into the second period, Mercer’s backhand pass set up Hughes for a sliding one-timer.

Yegor Sharangovich extended his point run to five games around four minutes later when he stole the puck from Buffalo’s Mattias Samuelsson along the end boards and sent it to Boqvist in the slot.

Tatar responded for the Devils with a shot from the left circle that sneaked between Anderson’s pads with 2:05 remaining in the second period, after Olofsson scored on a rush to put the score 2-1.