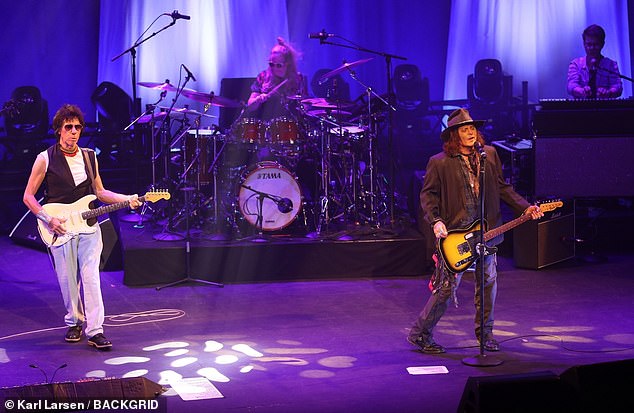 According to a new story, Johnny Depp is “totally devastated” by the death of his close friend and partner Jeff Beck.

People said on Wednesday that the band member of Hollywood Vampires was at the guitarist’s bedside along with “some other rock stars” before his death.

A insider told the publication, “They had a very close friendship, they were extremely close, and he grew even closer to her during their tour this past summer.”

The illness developed rapidly, and the situation has deteriorated significantly over the past few weeks.

According to the insider, Depp, 59, is “still processing” the news.

The insider indicated that he is distraught.

The English musician passed away on Tuesday due to bacterial meningitis. He was 78.

“It is with profound sorrow that we relay the news of Jeff Beck’s passing on behalf of his family. Yesterday, he died away peacefully after abruptly developing bacterial meningitis, his family announced in a statement uploaded to Twitter on Wednesday.

A source told People, “They had a very close friendship, they were extremely close, and he became even closer during their tour this past summer.”

“His family requests privacy as they grieve this devastating loss,” the message added.

Depp and Beck released an album titled “18” on July 18 and recorded a music video for the album’s first single. In October, the two appeared at The Paramount in Huntington, Long Island, during a tour stop.

During the summer, the musicians released an album titled “18.”

The pair also performed together during the Rock and Roll Hall of Famer’s recent UK tour, which occurred while Depp awaited the verdict in his explosive defamation lawsuit against ex-wife Amber Heard.

The jury ultimately ordered Heard, age 36, to pay the “Pirates of the Caribbean” actor $10 million in compensatory damages and $350,000 in punitive damages.