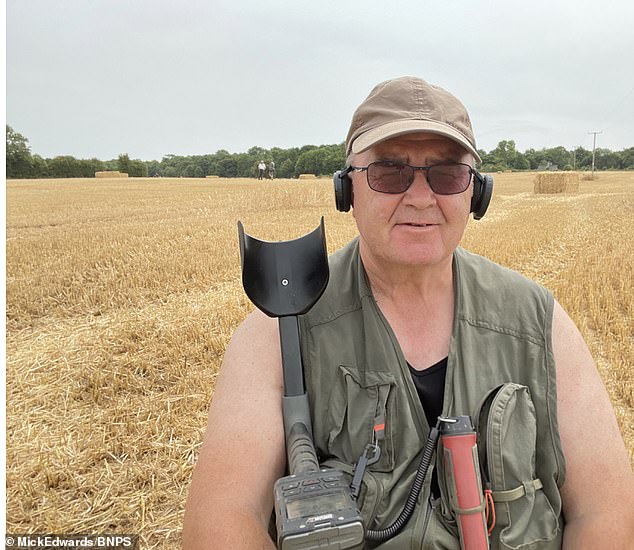 A large 600-year-old Portuguese gold coin that was found in a Wiltshire field by a metal detectorist was sold for approximately £20,000.

While visiting the town of Etchilhampton with his wife to commemorate their 35th wedding anniversary, 62-year-old Mick Edwards was engaged in detector work.

The rare item was sold at auctioneers Noonans of London’s two-day sale of coins and historical medals this week for a hammer price of £16,000.

The successful bidder’s final payment, including costs, came to £19,840.

The owner of the grazing land where the buried diamond was found will share the revenues with Mr. Edwards, a government worker from Peterlee in County Durham.

On July 5, the early bird found his find during a morning metal detecting excursion.

He was about to give up when he had little success and only found a few useless crotal bells, which were used on animals and horse-drawn carriages throughout the early medieval era.

Before breakfast, he had made the decision to make one more push to the top of the field when all of a sudden, his machine sent out a powerful signal.

He lowered his digging depth by roughly ten inches, used a probe to find the signal, and then saw the edge of the treasure.

He expected to find copper, so his surprise at finding a big, 33mm-wide coin from Portugal was astounding.

The first of its type to be discovered in Britain, the 600-year-old currency is a 10 Cruzados piece from the reign of King Manuel I of Portugal between 1495 and 1521.

The English landed gentry family Ernle owned the plot of land where he discovered the wealth from 1489 until 1928.

The Portuguese Order of Christ Cross cross is shown on the obverse, the side of the coin carrying the head or primary design, along with the Latin phrase “In this sign will we triumph.”

The coin’s upper right corner has been obviously damaged by a test punch. The reverse of the coin features the nation’s royal coat of arms.

The Noonans team informed Mr. Edwards that the gold was discovered in Lisbon utilizing gold taken from Africa by Vasco de Gama during the country’s heyday of discovery.

De Gama, an explorer from the 15th century, made history by sailing from Europe to India for the first time in 1497.

Its weight of nearly 35g, which is more than twice that of the biggest British coin at the period, indicates that it previously had a value more than £2.

The coin has the crowned royal emblems of Portugal on the obverse, a cross from the Order of Christ, a Latin phrase that reads “In this sign will we win,” and a test punch on the reverse, according to Nigel Mills, an expert at Noonans.

The biggest gold coin at the period in England was a Sovereign, which weighed 15.3g. Since this piece weighs more than twice as much, it would have been worth more than £2.

I had just celebrated 35 years of marriage the day before, and my wife and I were staying on a farm close to Etchilhampton in Wiltshire.

It was 6 a.m. and I had only discovered a few broken crotal bells up to that point, so I headed to the top of the field for one more search before breakfast.

Three steps later, I heard a loud signal that sounded like a giant copper coin.

I couldn’t even breathe as I simply sat and stared at the coin because I was so dumbfounded.

I assumed the coin was Spanish since I could see a cross on it, but subsequently learned it was Portuguese because of the king’s name, Manuel.

Since a decade ago, Mr. Edwards has been metal detecting to aid in his recovery from a severe condition affecting his kidneys that was brought on by diabetes.

He can’t sit for very long due to the discomfort, but metal detecting keeps him active.

He had only just purchased a Deus II detector, which led to his successful finding.