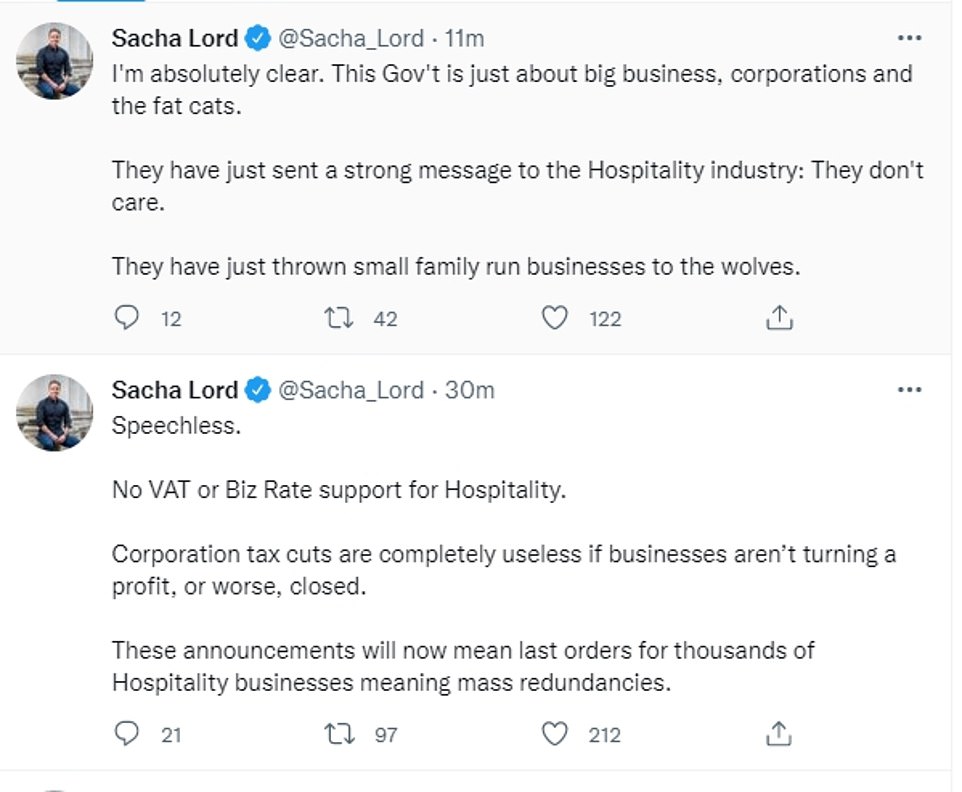 Despite Kwasi Kwarteng announcing the largest package of tax cuts in 50 years, it has been said that family-run firms have been “thrown to the wolves” by the Chancellor’s “mini-budget.”

As he announced reductions in income tax and stamp duty as well as the cancellation of anticipated increases in company taxation, Mr. Kwarteng referred to his plans “for development” as a “new era” for Britain.

The Chancellor claimed that his tax cuts will “transform the vicious cycle of stagnation into a virtuous cycle of growth,” to the applause of Tory MPs.

But worries have grown. The declaration did not go far enough to address the financial crisis that family companies are now suffering. These firms have been struggling for years as a result of the epidemic, the conflict in Ukraine, and the current cost-of-living problem.

“Speechless,” he wrote. No support for VAT or business rates for hospitality. If companies aren’t making a profit or, worse, aren’t open for business, cutting corporation taxes are absolutely meaningless.

These declarations now signal the end of business for thousands of hospitality enterprises, resulting in widespread layoffs.

“I’m very clear,” This government only cares about large businesses, big business, and fat cats. They just made a clear statement to the hospitality sector: They don’t care. Small family-run enterprises have simply been abandoned to the wolves.

Businesses who are already having trouble might “risk insolvency and liquidation,” according to the chief executive of Live, the organisation that represents the UK’s live music industry.

Although we appreciate the government’s efforts to address the rising cost of living, today’s statement does nothing to support the UK’s top-ranked live music sector, according to Jon Collins.

Jobs are already precariously balanced, and we agree with the chancellor that there are too many obstacles in industries like ours where the UK is a global leader.

Businesses that are already having trouble turning a profit risk going out of business and being shut down when the effects of decreased public spending power and increased prices across the supply chain are added together.

Only the emergency steps we’ve recommended to the government will stop this, including significant reform of business rates and a cut in the VAT on ticket sales, which would add money to the bottom line of struggling companies.

‘It will be perceived as a wasted chance to help enterprises that have been most severely affected during this crisis,’ he said. “It will cause tremendous concern, anger and irritation throughout the industry as they believe that many will have once again been left out in the cold.”

Even with the announcement of the limited tax cuts on national insurance, corporation tax, and duty, “We have been extremely clear with the Government that the Energy Bill Relief Scheme is unlikely to be enough to ensure businesses have the financial headroom to survive the winter, especially with yesterday’s announcement of the rise in interest rates from the Bank of England.”

The nighttime economy and hospitality sectors continue to be in an extremely vulnerable position, and I would urge the Chancellor and Government to reevaluate the inclusion of general business rates relief and the reduction of VAT within these measures, given the limited impacts of the current tax cuts on the immediate crisis for many businesses across the sector.

The Chancellor’s funding plan, according to the chairman of the Federation of Small Businesses (FSB), which advocates for UK business owners, is positive news.

The Federation’s national FSB chairman, Martin McTague, declared: “The Truss Government is off to a flying start.” Today, the chancellor announced policies that support small businesses and correctly acknowledged the importance of reducing taxes on employment, capital investment, and entrepreneurs to our economy.

With the prevailing headwinds, ministers must be tenacious in eliminating obstacles to small company development.

“The Government has today shown its commitment to supporting small companies, and we look forward to working with Ministers and departments to implement policies to support their expansion and success.”

Commenting on the small budget’s effects on retail and hospitality, ‘Retail, consumer, and leisure industries are facing a perfect storm of headwinds with a predicted decline in real consumer spending and inflation throughout the cost base; not only energy but labour and commodities as well as volatility in currencies,’ said Lisa Hooker of accounting behemoth PwC.

“Any assistance to increase expenditure or control expenses is thus appreciated.” Long-term tax cuts and investments in growth should benefit consumers, and reducing energy costs in the immediate term is crucial. However, the industry is still waiting to learn about further cost-cutting measures like business rates. Given the possibility of rising rates from inflation, they will be holding their breath until the main budget.

Given the decline in foreign visits to our tourist shopping districts, “the restoration of VAT free shopping for abroad tourists would be a much welcome gesture for businesses, delivering a much-needed boost for our essential high streets.”

“The hospitality sector has been hit by wave after wave of challenges,” said Eleanor Scott, director of strategy for the company’s hospitality and leisure division. “Multiple cost pressures pre-Covid, some of the strictest operating restrictions of any sector during the pandemic, ongoing staffing challenges, and now high inflation and the prospect of a consumer downturn.

Three out of every five operators in the hotel industry in the UK are reportedly not making money right now, and 20% are worried about surviving the next time. The assistance measures offered will be much appreciated in such situation.

The hotel sector will benefit from the alcohol duty freeze and get some much-needed help as it deals with issues like consumer spending becoming more cautious, continued staffing issues, and inflation throughout its cost base.

This is a terrific budget for company owners, says Samuel Mather-Holgate of the advice firm Mather & Murray Financial, located in Swindon. It is a growth-gamble, however. If it succeeds, we may be able to prevent a recession; but, if it fails, we will add billions to the national debt and lose faith in the global financial system.

Albion Forest Mortgages’ Mark Robinson, managing director, described the news as “excellent” for the property market, “though a little short-sighted.”

Since home prices have skyrocketed, in my perspective, the reforms have been long overdue, Mr. Robinson said. It will be fascinating to observe what movements lenders make in the next months now that the higher rate of tax has been eliminated.