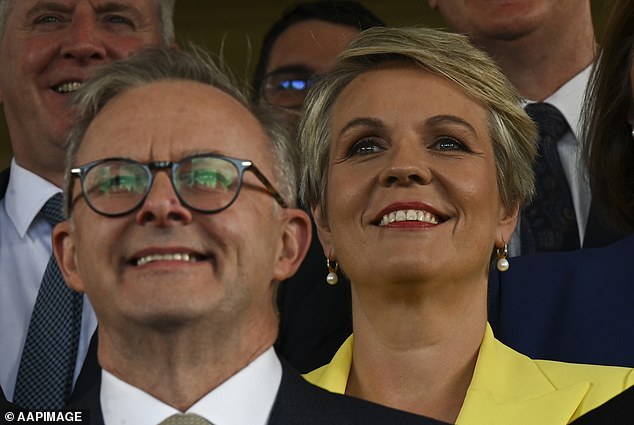 The government of Anthony Albanese might obstruct new coal and gas projects on environmental grounds, despite the fact that energy prices are expected to skyrocket.

Environment Minister Tanya Plibersek has granted an environmental group’s legal request to reevaluate 18 projects with a greater emphasis on their climatic consequences.

In July, the Environment Council of Central Queensland (ECoCeQ), represented by Environmental Justice Australia, filed a lawsuit to evaluate 19 projects.

Environment Minister Tanya Plibersek has granted an environmental group’s legal bid to have the climate consequences of 18 projects evaluated with greater scrutiny.

Even though renewables were being discussed within the International Mining and Resources Conference (IMARC) in Sydney on Friday, a small number of demonstrators were met with a large police presence.

The federal Budget released last month anticipated a frightening 56 percent increase in electricity rates over the next two years, on top of already escalating costs.

According to Nine media, fourteen of the reconsidering projects are located in Queensland, four in New South Wales, and one in Western Australia.

According to a representative for Ms. Plibersek, eighteen of the 19 mentioned in the legal complaint satisfied the criteria for reconsideration.

As the ‘decider’ for the now-threatened projects, Ms. Plibersek is unable to speak further, according to the spokesman.

The challenge was based on an obscure clause of the Environment Protection and Biodiversity Conservation Act, according to Hollie Kerwin, the lead lawyer with Environmental Justice Australia.

Multiple projects in Central Queensland’s Bowen basin, including the Lake Vermont Meadowbrook Coal Mine, the Caval Ridge Mine Horse Pit extension, and the Baralaba South Coal Project, could be denied as a result.

Last month’s federal Budget predicted a frightening 56% increase in electricity rates over the next two years, on top of already escalating costs.

The Environment Council of Central Queensland (ECoCeQ), represented by Environmental Justice Australia, launched legal action in July to have the 19 projects examined; according to a representative for Environment Minister Tanya Plibersek, 18 of the 19 projects satisfied the criteria for reconsideration (Pictured, mining protesters in Sydney)

In New South Wales, threatened projects include the Boggabri Coal Mine and Whitehaven’s Narrabri development, while in Western Australia, the Woodside Energy North West Shelf Project gas extension is at risk.

Whether governments are compelled to consider potential climate impacts when providing for current generations – as opposed to future generations – is a contentious issue.

Christine Carlisle, the president of ECoCeQ, asserted that previous energy ministers disregarded the effects of climate change on animals and plants while approving projects.

She stated, “The climate impact of each of the proposed mines and gas fields will destroy Australia’s natural treasures.”

Each will have enormous and irrevocable effects on the creatures, plants, and places that we want our children and their children to know and cherish.

In March, however, the Federal Court determined that then-Federal Environment Minister Sussan Ley had no duty to safeguard young people from future climate change-related harm.

The ECoCeQ provided the government with more than 3,000 supporting documents.

These featured fire maps and publications detailing the effects of global warming on natural habitats.

A significant topic of debate is whether governments are compelled to consider prospective climate implications when attempting to provide for present generations, as opposed to future generations.

The administration of Anthony Albanese might obstruct new coal and gas projects on environmental grounds, despite the fact that energy prices are expected to skyrocket in the next two years (shown, Whitehaven’s Narrabri mine. Its underground extension is one of the currently threatened projects)

ECoCeQ has backed proposals for Queensland to cease all coal-fired power generation by 2030.

Friday at the International Mining and Resources Conference (IMARC) in Sydney, Australia, a scattering of demonstrators were met with a large police presence.

Despite an internal emphasis on how the industry can support renewables, this was the case.

One of the surprises at IMARC was that up to 80,000 abandoned mines may be repurposed for renewable energy or environmental projects.