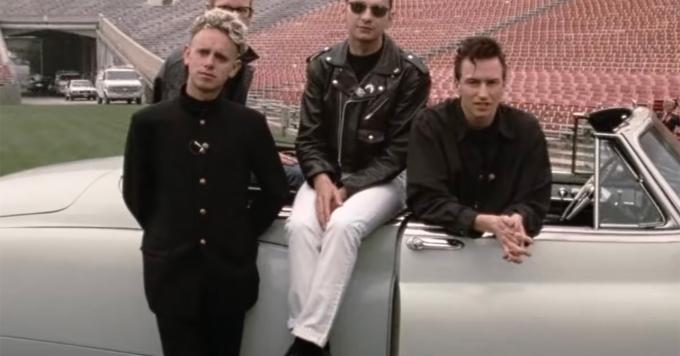 Who are the next 1980s icons that need to be rediscovered via a meme-generating series music synch, like Kate Bush, Metallica, and The Cramps? Depeche Mode receives my vote, although, like Metallica, they have never truly disappeared. From emo to EDM, their impact appears to be everywhere. Their ability to move from melancholy verses to massive pop choruses, their pulsating synthesizer textures, their ability to introduce British post-punk inspirations to the American mainstream, and even their metrosexual personal style, all appear as contemporary as the next TikTok craze.

Depeche Mode 101, a concert documentary from 1989, depicts the band at the time of their breakthrough. The title refers to the 101st and last concert of the band’s Music For The Masses tour, which took place at the Rose Bowl in Pasadena, California, in front of nearly 60,000 devoted fans. Similarly to Metallica, they had previously been considered a fringe underground act. They would never release an album that didn’t debut in the top 10 in the United States and the United Kingdom. The film is currently streaming on Showtime after being newly restored.

Depeche Mode could have easily followed in the footsteps of U2’s Rattle and Hum by employing a hip, young music video director to create a glamorized concert film depicting them as musical deities. Instead, they engaged legendary documentarian D.A. Pennebaker, whose resume included such groundbreaking films as Bob Dylan’s Don’t Look Back (1967) and Monterey Pop (1968). (1968). Only when Depeche Mode is performing is glamour present. Pennebaker throws a sobering eye on the remainder of tour life and the humdrum exploits of a bunch of adolescent contest winners who accompany the band across the country to their last stop in Los Angeles.

Prior to the release of Music for the Masses in 1987, Depeche Mode had not made much of an impression on the American charts, despite their consistent success in their native UK. They may have played cutting-edge electronic pop during MTV’s peak, but they created a devoted fan base in the United States like any self-respecting rock band by putting on a phenomenal live performance and traveling their narrow English arses off. Dave Gahan was one of the best frontmen of the era, dancing with abandon while singing his heart out. Despite playing music that could have been easily pre-programmed, bandmates Martin Gore, Andy Fletcher, and Alan Wilder play almost everything live on racks of keyboards, synthesizers, and electronic drums.

Outside of their coastal power bases, where they typically draw between 10 and 15 thousand fans, the band nevertheless draws crowds as tiny as 2,000 in outposts such as Nashville, according to informal interviews. Gore plays a believable bluesy groove on a vintage Rickenbacker as they visit the country music capital and purchase piles of old school country and rockabilly recordings. In between tour stops, the band endures boring soundchecks, dumb radio DJs, and condescending interviews, with one journalist receiving a more authentic response than anticipated when he asked Gahan about his most recent fistfight.

A group of Long Island fans who won spots on a tour bus through a contest on the local alternative rock radio station WDRE are following the band. While rednecks in the middle of the United States mock at their strange haircuts, the suburban children on the bus appear to be equally clueless about the lives of anyone from beyond their bubble. Aside from the occasional argument, the kids on the bus whose notion of a good time is drinking beer till they vomit experience little of interest.

Upon arrival at the Rose Bowl, Depeche Mode are informed that their performance must stop one hour early. The band frets backstage about between-song banter and what will be their largest US concert to date. In a separate trailer, their managers argue over how much to pay the venue for turf damage and marvel at how much money they’ve made from ticket and merchandise sales. Gahan discusses the disappointment that follows the conclusion of a tour, which, even at its most banal, is preferable to the dullness that awaits him at home.

In the pantheon of rock documentaries, Depeche Mode 101 should be more prominent. It depicts “bus kids” before The Real World and its descendants. It also portrays America in 1988 precisely, before the introduction of portable computer technology and the mainstreaming of underground culture flipped everything upside down. It resembles a postcard from a place that appears entirely foreign but whose echoes feel familiar.

Benjamin H. Smith is a writer, producer, and musician located in New York. His Twitter handle is @BHSmithNYC.