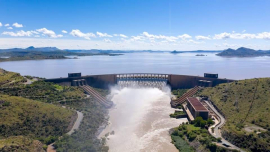 The Department of Water and Sanitation has encouraged the people to use extra care around bodies of water as the country’s water levels increase as a result of recent heavy rains in most areas.

This follows the recent flash floods in Johannesburg, Gauteng, which claimed the lives of many people.

Wisane Mavasa, a department spokeswoman, has urged residents to be cautious during this time of severe rains, especially those living in floodplains or near rivers, dams, or streams.

“We have recently witnessed severe flash floods due to thunderstorms in Gauteng. We therefore appeal to community members to be extremely careful, especially those who reside close to bodies of water like dams, rivers and streams.

“This is also the jolly time of the festive season, when people will take their celebrations to places with water to cool themselves and for enjoyment. We also appeal to those people to exercise extreme caution, as we are experiencing rising water levels due to heavy rainfalls,” Mavasa said.

Meanwhile, the government said that the rainy season has increased water levels in the country’s dams, which had been steadily declining in previous weeks.

According to the Department of Water and Sanitation’s weekly report, water levels in the country’s reservoirs increased sharply this week to 94.6%, up from 91.6% last week.

“This is a huge improvement from last year’s 88.4% national average mark currently. Most of the country’s water supply systems have also steadily increased,” Mavasa said.

The Kingdom of Lesotho’s Lesotho Highlands Water Project has grown from 99.5% last week to 102.3% this week, while the Polokwane Water Supply System has also increased to 105.7% this week, up from 104.7% last week.

Water delivery systems in the Eastern Cape have been improved. The Butterworth Water Supply System remains at high levels this week, with 100.3%, a slight increase from previous week’s 100.0%.

“Some water supply systems in the Eastern Cape are at their high levels but stagnant. Klipplaat Water Supply System, which supplies the Sarah Baartman District Municipality, is at its full capacity of 100.4%, an improvement from last week’s 100.2%.

“Eastern Cape water levels have experienced a slight increase, with the provincial water storage level at 77.6% this week, up from last week’s 76.8%,” Mavasa said.

Mavasa urged citizens to use water carefully, especially in Nelson Mandela Bay, which faces the significant threat of taps running dry owing to diminishing water levels in the water delivery system if residents do not respond positively.

“Despite figures showing an improvement in the Eastern Cape, it is known that the province is experiencing water supply challenges, particularly in Nelson Mandela Bay.

“We continue to make an appeal to the community of Nelson Mandela Bay Metro and the surrounding areas to double their efforts to reduce their water usage and to save water,” Mavasa said.

She also urged consumers to continue using water sparingly, “despite the reprieve provided by this rainfall season, which resulted in high levels of water in the country”.