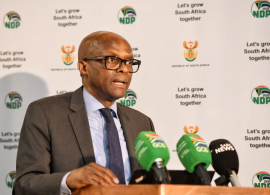 Thabang Makwetla, Deputy Minister of the Department of Defence and Military Veterans, said that the processing of the payment of the Military Veterans pension benefit would begin early next year.

On Thursday, Makwetla was speaking at a media briefing in Pretoria.

“The process to roll out the pension pay-out will commence after the lapse of the 30 days tabling in Parliament. The department will in the meantime take in applications and process them accordingly through the government pension processes and system,” he said.

Makwetla noted that administrative procedures slowed the execution of the decision to pay pension benefits to personnel of the non-statutory forces.

It was already stated that pension payments will commence on December 1st.

“[In] the process of the implementation of this decision we were confronted with unavoidable administrative processes which resulted in the delay in the payment of the pension benefits. One of these was the requirement that the Draft Pension Regulations and the Pension Benefit Access form should be tabled in Parliament.

“These were tabled in Parliament early in December 2022. This will in turn legalise the operationalisation of the pension pay-out to military veterans,” he said.

He noted that the department is “working around the clock” to expedite the distribution of the pension benefit.

In order to prevent any delays, Makwetla recommended that all veterans register with the department.

“Military veterans are urged to apply in person or through registered post. The correct address must be specified on the appropriate form, which can be found on the DMV website and provincial offices,” he said.

Nevertheless, Makwetla has stated that military veterans would now be eligible for the Social Relief of Distress (SRD) grant.

“The Presidential Task Team (PTT) has taken a decision that military veterans should be paid the Social Relief of Distress support amount of R1250.00 per month to augment their pension pay-out during the current challenging economic situation.

“This will be a significant improvement on the previous R350.00 social relief support paid to veterans. The department should find alternative ways to implement such support in an effective and equitable manner to ensure that all those eligible do benefit,” he said.