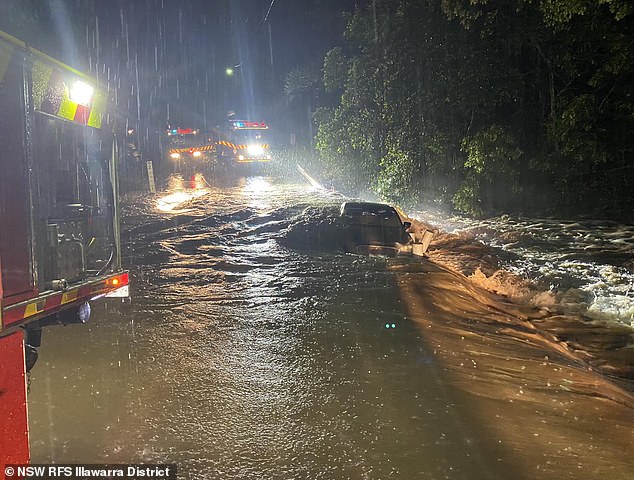 Despite an emergency weather warning, a man frantically trying to deliver pizzas on time almost drowned when his vehicle became stuck in an overflowing river.

The young man was swept away by swollen floods on the Hacking River in Otford, 60 kilometers south of Sydney, when emergency services were summoned to the scene at about 7.30 p.m. on Saturday.

The Sylvania motorist was able to phone triple zero from the top of his vehicle after it got trapped on two bollards on the bridge’s side.

Fortunately, a volunteer from the Rural Fire Service who owns the land next to the bridge was able to help the motorist together with officers from the Wollongong Police Department.

Soon after arriving, crews from Otford and Helensburgh joined them, and they used a large tanker truck to remove the man from the car’s roof.

The teenage delivery driver was “cool” during the rescue despite the hazardous circumstances, according to Otford RFS deputy commander Phil Rook.

He said, “Coming down here at the time was quite horrible. It was extremely wet and very slippery.”

According to Mr. Rook, the motorist did not drive through floodwaters; rather, his automobile slipped into the overflowing river as a result of rushing water on the road.

The driver was a local who was used to floods, but Mr. Rook said that familiarity alone isn’t always sufficient to keep drivers safe.

It’s improbable that the deliveryman would have been able to escape the currents without the bollards holding the vehicle in place.

The deliveryman was “very fortunate” to be alive, according to Mr. Rook, since he couldn’t have seen the rising waves from where he joined the road.

Naturally, you shouldn’t drive through flood waters, but you should also be aware of any hazards in your region and pay attention to the weather, the commander said.

Don’t believe you can just wing it; instead, strive to be prudent and take your time to get home safely.

It occurs as huge areas of NSW continue to experience heavy rainfall, which has flooded several rivers and prompted many flood warnings around the state.

For the Peel and Namoi Rivers in Tamworth, Gunnedah, Boggabri, Narrabri, Bugilbone, and Goangra, a minor to moderate flood warning is still in effect. Tamworth might see significant flooding on Sunday afternoon.

On Sunday, the state is expected to see strong winds as the low pressure system eventually travels out to sea, providing some relief for the locals from the erratic weather.

The beginning of a 2,500km-long rain band is expected to start developing on Tuesday night in central Western Australia, according to the SES, so districts throughout NSW are not yet out of the woods.

Early on Wednesday morning, the band is anticipated to travel eastward and bring light to moderate rains to southeast Western Australia and southern South Australia.

The low will ultimately settle over central and south NSW by lunchtime on Wednesday after completely extending from south WA, through SA, and across the whole of Victoria.

Residents who are already sick of flooding will see more inclement weather as Sydney officially achieves its wettest year in history.

The amount of rain last month was 126% above normal for the period between 1961 and 1990, making it the seventh wettest September on record.

These areas are expected to have moderate to heavy rainfall on Thursday morning, with central NSW and north Victoria expected to take the brunt of the downpour.

“There is a chance that more than 100mm will fall.” According to Weatherzone meteorologist Bob Neil, the central west and northwest of the state could get lesser rainfall, but still enough to result in catastrophic floods.

More catchments in NSW are still at danger of flooding, the SES has warned, with some places getting 100mm in only three days.

Fortunately for Sydney residents, the Harbour City is expected to avoid the most of the rain since rains are not expected until next Friday.

This Sunday, Brisbane should have its last showers for the next seven days, with a few more forecast before the system heads out to sea.

Through the impending rain belt, Perth could see generally bright skies with maximum temperatures in the low 20s.

Unfortunately, rain is predicted to begin falling on Adelaide from Tuesday until the end of the work week.

The rain will arrive in Hobart a bit later, with a high likelihood of showers predicted every day starting on Wednesday.

On Sunday, storms are predicted to hit Darwin, with up to 15mm of rain possible.