The Anambra State Chairman of the All Progressives Grand Alliance, APGA, Sir Norbert Obi has asked  the six members of Anambra State House of Assembly, who recently defected to an opposition political party to reconsider their decisions while it is still early.

Sir Norbert, who made the  call during a press conference at APGA’s state headquarters in Awka, said that granted the fact that defection may not be too bad if properly done based on ideological differences, the party is at loss as to why politicians, who rode on its back to victory in 2019 would make such hasty turns without formal reference to APGA’s leadership at the national and state levels.

Correspondent Blessing Uchendu reports that the APGA state chairman, while admitting that there is no political party in Nigeria without its own challenges, and, especially as the Anambra governorship election draws close, said that it was improper and unpolitical for the defected state lawmakers to overlook all reconciliatory steps set up by Governor Willie Obiano.

He  explained  that following internal hiccups that arose from the last primaries of the party, Governor Obiano  set up a Peace/Reconciliation Committee headed by a former National Chairman of the party, Senator Victor Umeh, to listen to and address  dissatisfactions of aggrieved party members, stressing that it was unjust and hurtful that the defected lawmakers threw caution in the wind by taking steps to harm the party that brought them to limelight. 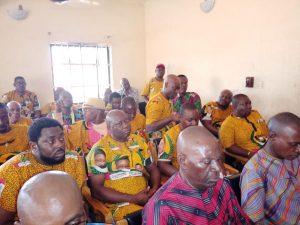 Sir Norbert, who said that the plea should not be seen as a sign of weakness but a fatherly magnanimity, urged them to come back so that the party could win together as one family and savour the victory of November sixth polls, without anyone having to regret his or her actions.

The APGA chief, who described the party as not just a political party but a movement for the actualization of the Igbo agenda in the Nigerian polity, said that it would amount to self-hurt if anyone takes action to undermine the political group.

He described Professor Chukwuma Soludo as a prophecy bound to happen, adding that the wishes and dreams of APGA’s founding father, Dim Chukwuemeka Odumegwu Ojukwu, for Ndi Igbo must never be discarded by the actions of few people.