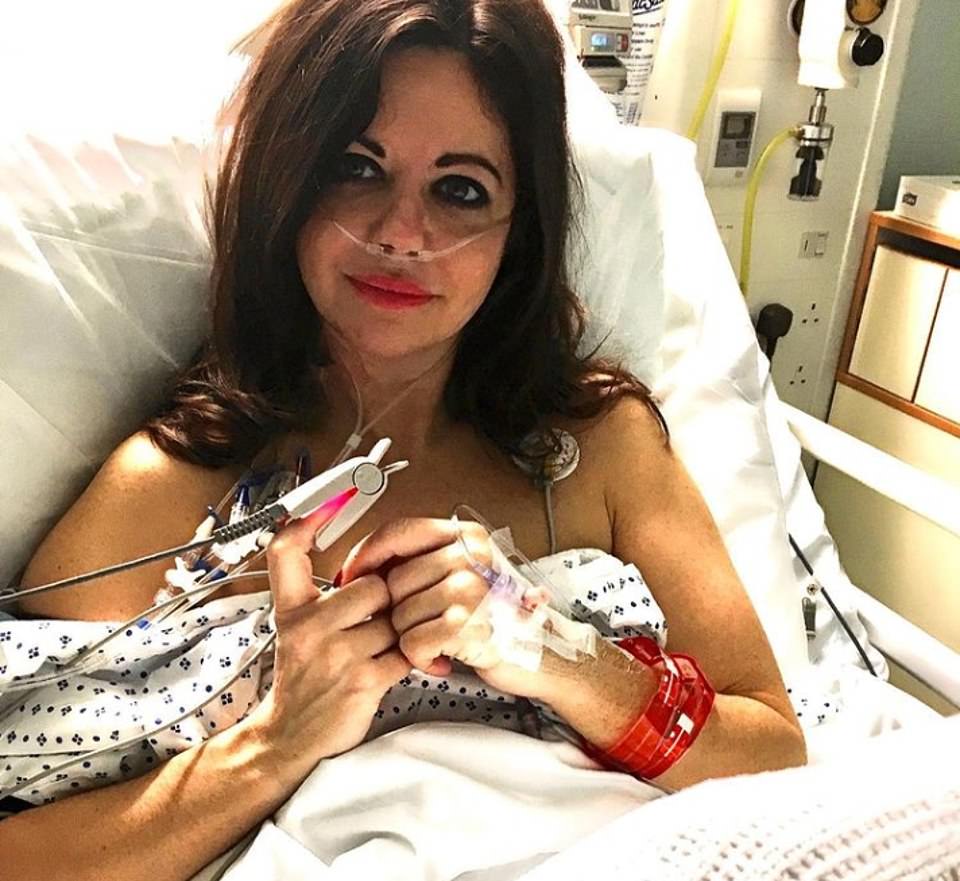 Cancer-stricken BBC podcaster Deborah James choked back tears today as she thanked everyone who donated to her cancer fundraiser that raised a staggering £1.4 million in less than 24 hours.

Speaking in an interview, she said learning about the huge number of donations to ‘Bowelbabe Fund for Cancer Research UK’ made her feel ‘utterly loved’ and like everyone is ‘in at the end together’ to make a difference. She said she was ‘absolutely mind blown’ by the figure, and thanked people for their generosity.

Her interview came after she said she is is preparing to ‘surrender to the inevitable’ and is in end-of-life hospice care surrounded by her family, in a heartfelt ‘final’ newspaper column. The 40-year-old star of acclaimed podcast ‘You, Me and the Big C’, wrote that her body had been left ’emaciated’ by five years of battling bowel cancer.

Speaking to the BBC on Tuesday, Ms James – who has incurable bowel cancer – said that setting up a fund towards cancer treatments had been something she had always wanted to do. ‘Ultimately, what I really want to happen is I don’t want any other Deborahs to have to go through this,’ she said.

‘We know that when we catch cancer early, we can cure it. We know that much more investment needs to take place in cancer. We know that we have the skills and the passion in the UK to do so. But I just feel that, we still need that reminder, that boost and that money.

‘And so before I died, the one thing I knew I wanted to do was set up a fund that can continue working on some of the things that gave me life, such as the innovative drug studies, because if it wasn’t for some of the drugs that I was put on early – that gave me two years of extra life and that could be somebody else’s life.’

She said while speaking to the BBC to do the interview, she had found out that the fundraiser had already broken the £1 million milestone. Ms James said in her mind, she had imagined they could raise around a quarter of that.

‘I thought that would be enough to fund a couple of projects across charities I wanted to fund. 24 hours to do a million and I’m absolutely mind blown,’ she said. ‘I just cannot thank people enough for their generosity because it just it just means so much to me.

Fans and colleagues were last night celebrating her work raising awareness of bowel cancer and helping ‘break the stigma’ of the ‘Big C’.

Among them was Mr Bland, whose wife Rachael, a BBC News journalist who launched the ‘You, Me and the Big C’ podcast with Deborah and co-host Lauren Mahon in 2018 after he own cancer diagnosis. Mrs Bland succumb to her breast cancer later that year.

In an Instagram post, Mr Bland said: ‘Where to even start… I’ll leave everything I want to say for another time. Just so proud of this wonderful, inspirational woman that I get to call one of my best friends.’

Responding to news that Deborah’s fundraiser had reached more than £1million, he added: ‘Do not adjust your sets. Bowelbabe has raised over one million pounds. We are not done there though are we?’

Deborah James’ announcement that she is moving into hospice care in full:

‘The message I never wanted to write. We have tried everything, but my body simply isn’t playing ball. My active care has stopped and I am now moved to hospice at home care, with my incredible family all around me and the focus is on making sure I’m not in pain and spending time with them.

‘Nobody knows how long I’ve got left but I’m not able to walk, I’m sleeping most of the days, and most things I took for granted are pipe dreams. I know we have left no stone unturned. But even with all the innovative cancer drugs in the world or some magic new breakthrough, my body just can’t continue anymore.

‘In over 5 years of writing about how I thought it would be my final Christmas, how I wouldn’t see my 40th birthday nor see my kids go to secondary school – I never envisaged writing the one where I would actually say goodbye.

‘I think it’s been the rebellious hope in me.

‘But I don’t think anyone can say the last 6 months has exactly been kind! It’s all heartbreaking to be going through but I’m surrounded by so much love that if anything can help me through I hope that will.

‘I always knew there was one thing I always wanted to do before I died. I have always over the years raised as much awareness and money for the charities that are closest to me. @cr_uk @royalmarsden @bowelcanceruk

‘As a result, the @bowelbabefund is being established and I’d love nothing more than for you to help it flourish. Please visit bowelbabe.org for all the info and to donate (link in Bio).

‘All I ask if you ever read a column, followed my Instagram, listened to the podcast or saw me dressed as a poo for no reason. Please buy me a drink to see me out this world, by donating the cost to @bowelbabefund which will enable us to raise funds for further life saving research into cancer. To give more Deborah’s more time!

‘Right now for me it’s all about taking it a day at a time, step by step and being grateful for another sunrise. My whole family are around me and we will dance through this together, sunbathing and laughing (I’ll cry!!) at every possible moment!

‘You are all incredible, thank you for playing your part in my journey. No regrets.

Meanwhile, her podcast co-host, Lauren Mahon, shared a lengthy tribute on Instagram, saying that hearts have been ‘shattered into thousands of pieces’ by Deborah’s announcement and are simultaneously ‘completely bursting with pride’.

At the start of the year, Deborah, who shares her children Hugo, 14, and Eloise, 12, with her husband Sebastien, announced she had ‘nearly died’ in hospital, calling it the ‘hardest’ part of her 5-year cancer battle, and was admitted as an in-patient earlier this month.

She was told early on in her diagnosis that she might not live beyond five years — a milestone that passed on Christmas of 2021.

Writing in her Instagram post, she said: ‘Nobody knows how long I’ve got left but I’m not able to walk, I’m sleeping most of the days, and most things I took for granted are pipe dreams. I know we have left no stone unturned.

‘But even with all the innovative cancer drugs in the world or some magic new breakthrough, my body just can’t continue anymore.’

‘In over 5 years of writing about how I thought it would be my final Christmas, how I wouldn’t see my 40th birthday nor see my kids go to secondary school – I never envisaged writing the one where I would actually say goodbye.

‘I think it’s been the rebellious hope in me.’

Tributes to Deborah called her a ‘true inspiration’ and a ‘force to be reckoned with’ when it came to talking about bowel cancer.

Her podcast co-host, Lauren Mahon, shared a lengthy tribute on Instagram, saying that hearts have been ‘shattered into thousands of pieces’ by Deborah’s announcement and are simultaneously ‘completely bursting with pride’.

Ms Mahon said that she is ‘not ready to accept what’s happening right now’ and asked for people to keep Deborah’s parents, siblings and family in their ‘hearts, thoughts and prayers’.

Deborah’s fundraising efforts, adding: ‘She did it! Bowelbabe did that. Let’s keep it going. Two mil anyone? Proud doesn’t cut it anymore. It’s awe.’

‘Raising that amount of money will have an extremely positive effect.’

‘She’s raised awareness and undoubtedly she’s saved lives. She’s also made it clear that it’s not just older people who get bowel cancer.

‘She was in her 30s when she was diagnosed. She has fought against all odds. She’s beloved by the nation now.’

And Genevieve Edwards, chief executive of the charity Bowel Cancer UK – of which Ms James is a patron – said the number of lives that the podcaster has saved and will continue to save with her awareness and fundraising was ‘nothing short of incredible’.

She told the BBC: ‘We’re all desperately, desperately sad to have this news and our hearts are with Deborah and her family at this time.’

Meanwhile members of the public also paid tribute as part of a wave of social media posts.  Philip Counsell tweeted: ‘Deborah James, as been a complete legend, for raising awareness for Bowel Cancer and raising millions.

‘I have followed her journey in fighting it five years ago. What as been the overriding theme is absolute stoicism to fighting it. I am so proud of her, and family.’