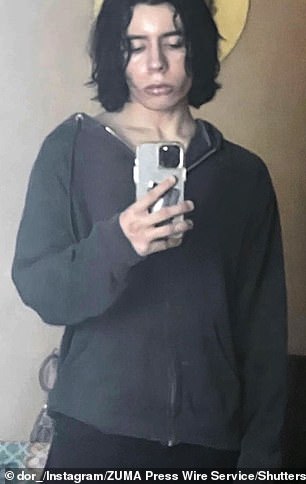 A female gamer reported a fellow online player to the FBI after he threatened to ‘shoot up a school’ when he lost their game – just hours before 18-year-old gunman Salvador Ramos killed 21 people in a Texas school massacre.

The woman, who has not been identified, was playing horror survival game Dead by Daylight – with four other people online where they are only known as their ‘gamer tag’ on Tuesday.

In the game, four players are assigned the role of ‘The Survivors’ who must hide and survive another player: ‘The killer’. If caught, the survivors are impaled on hooks and sacrificed.

But she became disturbed when she heard a male gamer playing the ‘killer’ launching a furious tirade when he lost and ‘started saying they were going to shoot up a school’.

The ‘killer’ even claimed they would use an AR-15.

This is the same weapon Ramos used just a few hours later when he shot his grandmother in the face, then drove to Robb Elementary School in Uvalde, Texas, where he shot dead 19 children and two teachers.

After the male gamer began making the threats, the female gamer recorded them an sent the audio to the FBI, along with the creators of the game, Behaviour Interactive.

‘They mentioned they had some type of gun and kept saying it was going to be all of our fault,’ said the player on Reddit.

[I] recorded the entire postchat and we all kind of brushed it off as him just saying edge lord type sh*t,’ she wrote in r/deadbydaylight, the game’s subreddit.

‘But I just am like in disbelief because I’ve never seen someone say that before.’

She added that she ‘did report them to the FBI’ but said that she was ‘a little stressed because when i went back to watch exactly what they said the person said “what if i shoot up a school tomorrow :)”’

Asked by another Reddit user if she thinks the outburst was linked to the school shooting, she replied: ‘[I] don’t know, the gun he mentioned was an ar15 with i think an extend clip or something but i don’t know. i feel horrible for those children and families.’

A source told The Sun that Ramos was known for making threats online while playing video games.

‘I do know someone that used to play Call of Duty with him online and he would talk about school shootings all the time but everyone on the game always thought he was joking,’ the paper reported a female Instagram friend of Ramos’ as saying.

Dead by Daylight is inspired by slasher-horror films such as A Nightmare on Elm Street, and other survival-horror media.

The game’s developers told MailOnline that they have a strict reporting process for reporting real life threats made during gameplay.

‘All reports filed by players are acted upon in a timely manner,’ a spokesman said. ‘That said, we unfortunately can’t share specific details publicly.

‘Creating a safe space where our fans feel secure is a core value for Dead by Daylight.

‘That’s why we have an active team dedicated to offering them support and monitoring activities communicated to them via the in-game reporting system.

‘In the case of potential real-life threats, we have strict reporting processes involving cybercrime units to ensure that each situation is addressed by competent authorities.’