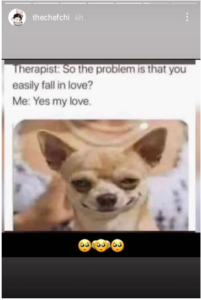 The singer left tongues wagging when he announced that he is in a relationship.

It was gathered that the singer had carpeted his artiste, Peruzzi for claiming that all Davido’s crew members including Davido were singers.

Taking to his comment section, Davido made the world know that he has a girlfriend.

This has left many speculating if he had gotten back with his on and off again girlfriend Chioma or was indeed dating his alleged side chick, Vanessa who has been spotted with the singer.

She shared a meme of a dog looking sober with the caption,

“Therapist: So the problem is that you easily fall in love?

To add to it, the mum of one shared hot photos of herself to ‘pepper’ her ex.

Davido and Chioma Rowland made their fans happy when they re-followed each other on the Instagram app.

On March 31st, the lovebirds who many believed were back together had surprisingly unfollowed each other on the Instagram app.

Chioma had even blocked Davido’s lawyer, Prince who she has always had an issue with.

Looking through their Instagram pages it was found that the parents of Ifeanyi Adeleke were no longer following each other.

This came as a big surprise as Davido and Chioma were reportedly together in Dubai for Expo 2022.