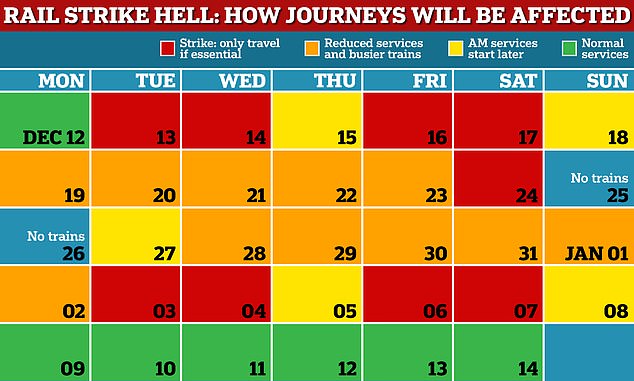 Travel throughout Britain in the lead-up to Christmas will be severely disrupted by a fresh round of train workers’ strikes this month.

More than 40,000 members of the Rail, Maritime and Transport union are taking industrial action in December, making it one of the worst periods for rail travel in recent memory.

In the midst of the UK’s ongoing cold snap, railway workers launched their first round of 48-hour strikes on Tuesday at Network Rail and 14 train operators.

With the government contemplating introducing laws in the New Year to reduce the impact on essential services, the next four weeks will resemble an advent calendar of strikes.

Bus drivers, Royal Mail employees, nurses, and highway workers are among the many other workers who will stop working this week in protest of their employment, salary, and working conditions.

Following their rejection of a wage offer, the militant union leaders have been charged of holding the holiday plans of the British people hostage.

“We’ve been presented with an extraordinarily harmful offer,” RMT general secretary Mick Lynch said. “Our members are simply unable to accept the modifications the employers have put out.”

Richard Madeley, the presenter of GMB, and Mr. Lynch got into a heated argument, and Mr. Lynch told GMB that he had “no intention of ruining people’s Christmas.”

Because they prevented the corporations from making adequate bids, he said, “The Government is contributing to the ruining of the people’s Christmas.”