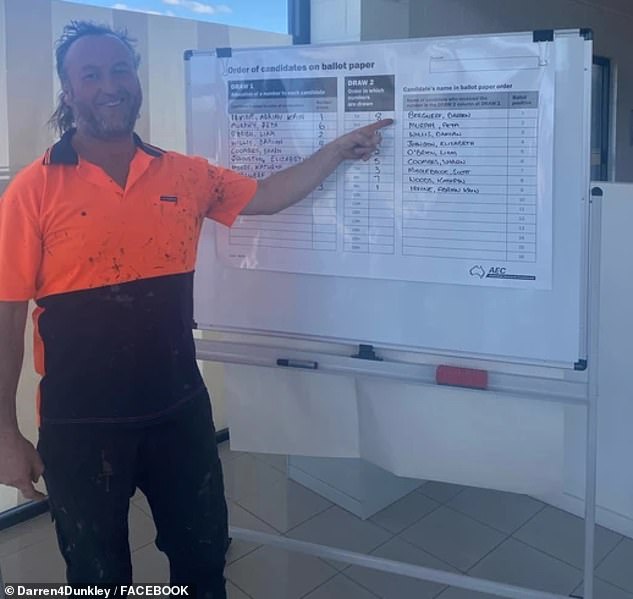 A tradesman running in the federal election has asked voters to text him photos of their ballot papers when they cast them.

Darren Bergwerf, 52, a builder and carpenter, is campaigning as an independent for the seat of Dunkley in Melbourne’s south-east.

One local shared a photo of his how-to-vote card after they received it in the mail and questioned why the phone number was included.

‘Noooo, Dazza the Tradie, I won’t be providing you with my mobile number. Is this even legal?’ they wrote.

‘I wouldn’t get you to move a hole from one end of the garden to the other.’

Mr Bergwerf shared a video to his social media in which he explained why he included the number at the bottom of his slips.

‘I’ve heard allegations there can be dodgy stuff that could happen in some electorates in the polling booths or the counting room,’ he said.

He explained he wanted voters to take a ‘few extra steps to make sure we have a free and fair election’.

‘I’m the only freedom-fighting, patriotic independent on the ballot in Dunkley,’ he said.

Mr Bergwerf’s biography states he has built a life for his family after being kicked out of home when he was 16 and now ‘proudly works alongside his sons’.

His policies include building new facilities to support homeless youth, revamping the education curriculum and raising teachers’ wages, and a recognition of First Nations people as sovereign landowners.

Dunkley is a marginal seat with Labor’s Peta Murphy the incumbent with 52.7 per cent of the two-party preferred vote in 2019.

She is running again alongside Mr Bergwerf, Sharn Coombes for the Liberals, Adrian Irvine for the UAP, Kathryn Woods for Australian Federation Party,Liam O’Brien for the Greens and Scott Middlebrook for One Nation.