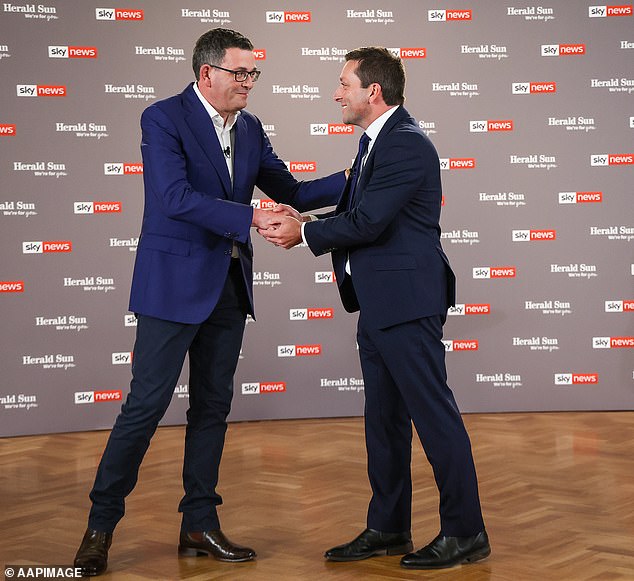 Premier Daniel Andrews and Opposition leader Matthew Guy engaged in a heated election discussion over voter worries that Melbourne’s central business district is dying and the state is plagued by debt.

On Tuesday evening, the political opponents answered unscripted questions from indecisive voters, only four days before the state election in Victoria.

Stuart, an indecisive voter, asserted that Melbourne lagged behind other Australian capital cities in its post-Covid recovery, which sparked a heated debate.

Mr. Guy stated that Melbourne residents required efforts such as capped public transportation to enter the CBD, whilst Mr. Andrews disagreed and stated that the city was thriving.

This inquiry is addressed to both of you. What will you do to restore Melbourne’s central business district to its proper condition? Stuart questioned his opponents, “Which city is thriving?”

Mr. Guy stated that his party has created a revitalization plan for the central business district that would include a $2 flat charge on public transportation to help draw people back.

“We must bring people back, we must urge them to return to the city,” the Liberal leader told the throng. “That is what our CBD revitalization strategy accomplishes.”

“Melbourne can be the dynamic city it was in the past, and this is due to the initiatives we’ve proposed to everyone.”

Mr. Andrews, however, disagreed with Mr. Stuart and stated that Melbourne was booming.

We had the largest Grand Prix in the history of the sport earlier this year, as well as the T20 World Cup, and we shattered several records, he remarked.

There’s a lot going on: Billy Joel is coming to town, tickets sold out in minutes, and fifty percent of the audience is not from Victoria. Undoubtedly, there is much more work to be done.

Premier Danial Andrews and Opposition Leader Matthew Guy have responded to queries from hesitant voters in the Box Hill seat.

Mr. Andrews (Tuesday night, 022 People’s Forum) stated that Melbourne was prospering post-Covid, whilst Mr. Guy (right) stated that people needed to be encouraged to return to the city.

Then, Mr. Andrews was questioned over his commitment to decreasing the state’s debt.

Undecided voter David remarked that he was fortunate to be comfortably retired, but he was concerned about the impact of government expenditures on his grandkids.

Mr. Andrews informed him that debt would need to be repaid for “generations to come” and reassured him that spending would guarantee economic development.

He stated, “This will soon be the largest city in our country, and it is exactly what we require.”

If you borrow money to increase the size of a location and the economy, it is money wisely spent.

Earlier in the event, the host of Sky News, Kieran Gilbert, questioned the rivals on their plans to unify Victoria during a difficult period of time and a global epidemic.

Mr. Andrews stated he had a ‘positive and hopeful agenda’ and assured voters he would work diligently to fulfill his commitments.

The premier stated that he had been “doing things” for the past eight years and that he still had “many things to finish and so much more to accomplish.”

Mr. Andrews won the forum vote by a razor-thin margin, with 38 percent to 34 percent in his favor and 28 percent unsure.

The political opponents answered unscripted questions from indecisive voters on Tuesday evening, only four days prior to the state election in Victoria.

Attendees of the forum questioned the leaders on the growing cost of living as well as relevant topics such as the affordability of housing, health care, education, transportation, and roads.

A voter inquired as to whether Mr. Andrews will eliminate Labor’s “misinformation campaign” claiming that gas can only be extracted by fracking.

If elected in the November 26 election, the social media adverts suggest, the Liberals will repeal the state’s constitutional ban on fracking.

Mr. Andrews disputed it was misleading and stuck by his scientifically supported argument that fracking was the only option to access gas reserves.

He stated, “The principal scientist has made it quite plain that there are no known or probable gas reserves that can be exploited using traditional methods on land.”

“The only way to achieve a “gas-dominated future” is to frack. That is a simple fact.

Mr. Guy, however, stated that another study from the top scientist revealed that up to 830 petajoules of onshore gas were ready to be extracted using conventional methods.

I am not here to engage in petty name-calling. I have often stated during news conferences that we would not frack,’ he added.

The leader of the Liberal Party stated that he did not wish to be pulled into a conflict, but the premier persisted.

It is not a debate. Mr. Andrews stated, “This is a discussion on a rather significant matter.”

Mr. Andrews stated that he provided Victoria a ‘positive and hopeful strategy’ and committed to work diligently to fulfill his commitments, including keeping people employed.

Mr. Andrews informed voters that he had been “doing things” over the past eight years and that he still had “many things to do and so much more to do.”

Matthew Guy (left) stated that the next election will be among the most significant in the state’s history and that he intended to’restore faith in the state.’

In his opening remarks, Mr. Guy pledged to invest in healthcare and emphasized the need of easing small company cost constraints.

He stated that the approaching election will be among the most significant in the state’s history and that he intended to’restore faith in the state.’

With only four minutes remaining, the leaders were instructed to pose a question to one another. Mr. Andrews chose to ask his opponent about healthcare.

He questioned, “Why do you continue to broadcast criticism on our health system that ignores the reality that our nurses, ambo’s, midwives, and the entire team have worked so hard during a one in a hundred event? It’s as if you deny we had a pandemic.”

Mr. Andrews questioned if they agreed that healthcare workers should be commended and given additional “recovery assistance.”

In his opening remarks, Mr. Guy (shown with his wife Renae) committed to invest in healthcare and emphasized the need of easing the cost burdens on small businesses.

Mr. Guy said, “Daniel, your government has ruined the health care system; you’ve had eight years, and I want to repair the harm you’ve caused.”

Why has your administration adopted such a hostile and divisive manner for the past eight years, when at this juncture we need a leader who can unite us rather than split us?

Mr. Andrews informed his opponent that the Labor Party had a constructive and hopeful approach and that he did not make “popular judgments, but the right decisions.”

In his concluding remarks, Mr. Guy stated that Victoria need unity and pledged to restore the state’s healthcare system if elected.

Mr. Andrews stated that he was seeking a third term in office so that he could continue working with Victorian nurses and paramedics and implement free kindergarten.