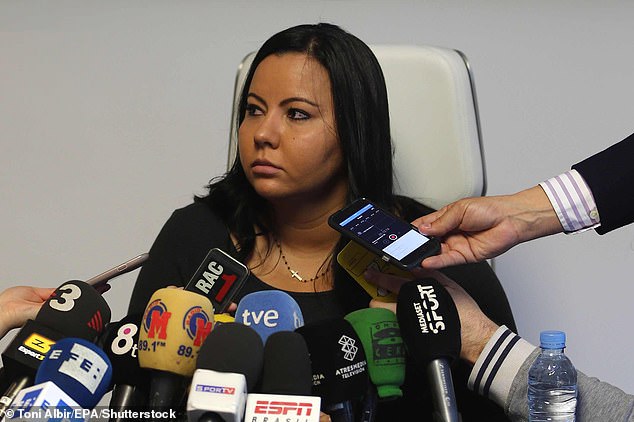 The ex-wife of Brazil international Dani Alves has stated that she is living in a nightmare since his arrest and incarceration, adding that he would ‘never’ conduct the alleged sexual offense.

Alves, 39, has spent the last three nights at the Brians 1 prison outside Barcelona, where he was detained for an alleged sexual assault at the Sutton nightclub last month.

A purported victim accused him of hitting and raping her in a nightclub restroom.

Court officials who revealed the football player is the subject of an inquiry for suspected sexual assault did not specify the nature of the allegations.

Ex-wife of Alves Dana Dinorah stated, “I’m still in shock. It appears to be a nightmare, yet it is not occurring.’

Former wife and agent Dinorah is seen here in 2015 during a press appearance in Barcelona.

Insisting that she thought the father of their two children to be innocent, the Brazilian businesswoman told a Spanish television program: ‘Dani would never, ever, ever do this.

I have known him for 22 years and was married to him for ten.

This has come as a surprise to me and my children.

“I have two adolescents who are suffering,”

Speaking on Telecinco’s Fiesta program, Dana stated, ‘Dani wanted his attorney to call me so I could handle his most pressing matters.

I learned he was incarcerated because of the phone call he instructed his attorney to make to me.

I have not had access to Dani and have been unable to contact him via phone. His attorney reports that he is sad but otherwise healthy. She is the only individual who has seen him.

“I’m here to offer whatever assistance I can.”

Former Barcelona footballer Dani Alves is being incarcerated at the Brians 1 prison near Barcelona.

Dani Alves (L) in 2021 with his wife Joana Sanz (R), who recently spoke about her husband’s detention.

Dana commented after the footballer’s current wife, Spanish model Joana Sanz, stated that she had lost the ‘two foundations of my life’ as a result of her husband’s imprisonment and her mother’s passing.

The former Barcelona defender was detained after coming to Spain last week following the death of his mother-in-law. He was fired by Mexican team UNAM Pumas when it was revealed that he had been remanded in custody by a judge on sexual assault allegations.

Before the rape allegation surfaced, it was reported that Alves, who became the oldest Brazilian to play in the FIFA World Cup last month, had been accused of putting his hands down a woman’s underpants in a nightclub restroom.

Overnight, Spanish media reported that the footballer had asked his defense attorney for permission to be re-interviewed under oath by the judge who incarcerated him pending the outcome of an ongoing investigation so he could clarify inconsistencies in statements he has made in and out of court about the allegations prior to and after his arrest.

Prior to his arrest, he informed a television program that he had never met his female accuser, although admitting to being present at the nightclub where the claimed event occurred.

Spanish media reported over the weekend, without clarification from police or court authorities, that he told the judge he had “consensual sex” with the woman after being told that witnesses and CCTV footage contradicted his TV assertions that he had never seen his alleged victim.

After a year with Barcelona, Dani Alves transferred to the Mexican league’s UNAM Pumas.

Joana Sanz, a native of Tenerife, had already demonstrated her support for her husband before to his arrest and imprisonment by stating on social media that her husband had never showed her disrespect and that she had witnessed ladies ‘trying on’ with Alves in front of her.

She shared a picture of them holding hands with the caption “Together” in English hours before he was sent to custody.

Joana, who wed Alves in 2017 in Formentera, an island off the coast of Ibiza, wrote on Friday night, “I request that the media respect my privacy at this time.

“My mother passed away a week ago, and I had only just began to come to terms with the fact that she is no longer with me when my husband’s position became unbearable.

The only two pillars in my life have been lost.

Alves was released from his UNAM Pumas contract after returning after a stint with Barcelona.

Alves is anticipated to remain at Brians 1 for at least the next two weeks, pending his attorney’s ability to convince judges that he is not a flight danger and should be released after posting bond.

In some instances, investigations of the type currently being performed by the investigating magistrate can take months or even years to complete; however, while suspects are in custody, they expedite their investigations as much as feasible.

In Spain, those under formal investigation may be kept in prison without charge for up to four years, whereas the norm is two years.

In Spain, formal charges are not filed until an investigating magistrate determines there is sufficient evidence for a trial and then invites prosecutors to present an indictment.

During the Friday behind-closed-doors court session that followed the footballer’s arrest at an undisclosed location in Barcelona, both the state prosecutor and a lawyer for Alves’ female accuser urged the footballer’s continued detention