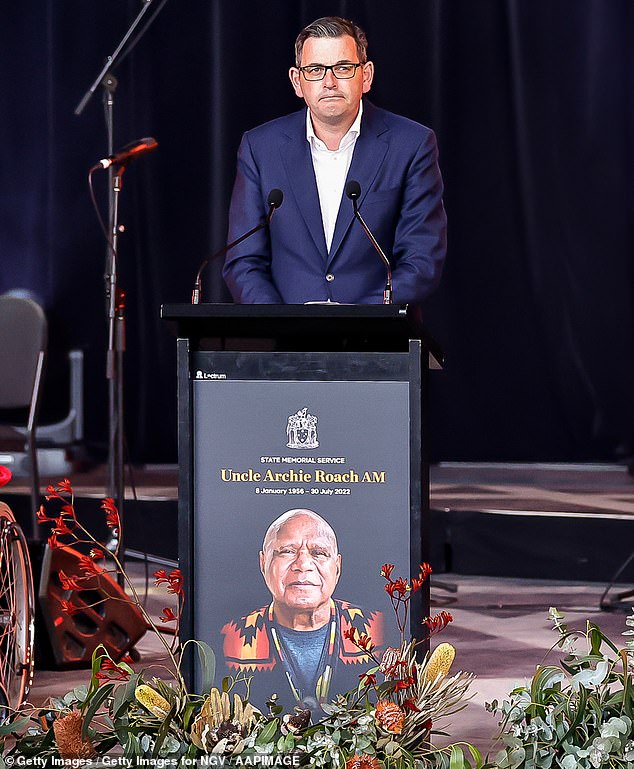 On Thursday, at Archie Roach’s state funeral service in Melbourne, the Victorian government formally apologized to the singer and storyteller.

After a lengthy illness, Gunditjmara-Bundjalung elder Archie Roach passed away in July at the age of 66.

Premier Daniel Andrews apologized to Uncle Archie for his forcible relocation from his family when he was two years old, an act that separated him from his country, culture, community, and language.

The past actions and legislation of the government had caused Uncle Archie enormous agony, sorrow, and despair, as stated by the premier.

Victorian Premier Daniel Andrews (pictured) has publicly apologized to the late musician Archie Roach on behalf of the state government.

Mr. Andrews stated, “We apologize for the tremendous barbaric atrocities performed against you, the torture, the unutterable pain, and the intergenerational trauma you and your family continue to endure.”

The memorial service has attracted thousands of mourners to the Sidney Myer Music Bowl, where Australian music legends will perform in his honor.

Uncle Kutcha Edwards sang a reworked national song and, in an emotional homage, he recalled around the globe with Uncle Archie while singing.

Mr. Edwards then collaborated with Uncle Archie’s son, Amos Roach, to play Took the Children Away, Uncle Archie’s debut track from 1990 that reflected his experience as a member of the stolen generation.

This song introduced him to the Australian music scene and appeared on his debut album Charcoal Lane.

Archie Roach and Ruby Hunter are spotted at the 2008 ARIA Awards afterparty.

Uncle Archie earned eight music industry awards and was admitted into the ARIA hall of fame in 2020 after a globe tour.

He played for many years with his late life and musical partner, Ruby Hunter, who passed away in 2010.

In 2011, Uncle Archie was diagnosed with lung cancer and in 2010, he suffered a stroke. Later, half of his lung was removed.

His sons, Amos and Eban Roach, granted permission to use his name and image so that his legacy continues to inspire.

After his passing, they released a statement stating, “Archie wanted all of his many followers to know how much he loved them for supporting him along the road.”

“We are extremely proud of what our father has accomplished in his extraordinary life. He was a unified and healing force. His music brought together people.

In recent years, Uncle Archie’s live performances required the use of oxygen.

Uncle Kutcha Edwards (shown) sang a revamped rendition of the Australian National Anthem at a State Memorial Service honoring the life and music of Archie Roach on December 15, 2022.

Dan Sultan (shown on the right) plays at the July memorial service for Archie Roach.

»Dan Andrews apologizes to Archie Roach, an Aboriginal musician, for the stolen generation«