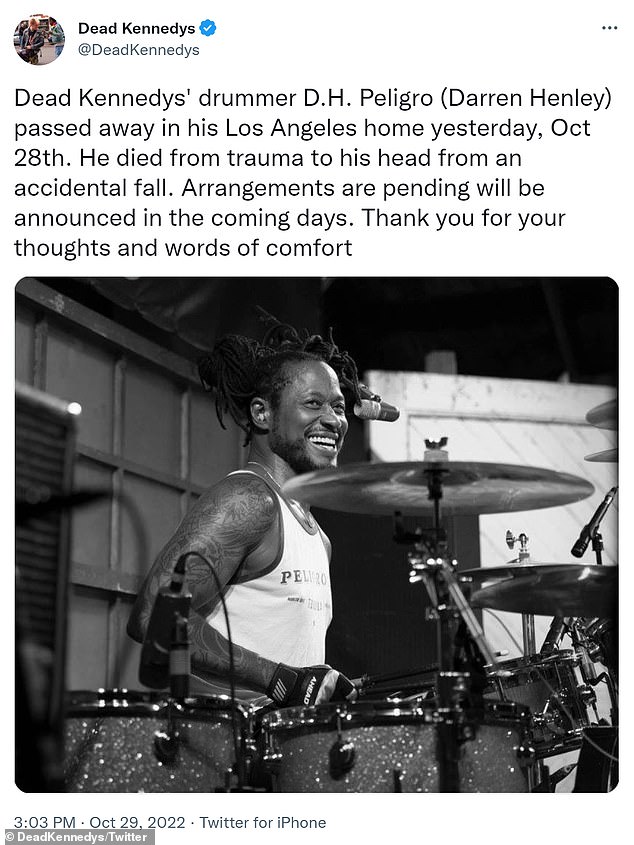 D.H. Peligro, the drummer for the iconic punk band Dead Kennedys, passed away at the age of 63 after a fall at home.

On Friday, Peligro, whose true name was Darren Henley, passed away at his Los Angeles home, according to the band’s social media profiles.

‘Police at the site said that he died as a result of head injuries sustained in a fall’ Please respect the privacy of the family during this difficult time. Thank you for your comforting thoughts and words,’ the statement added. The group stated, “Arrangements are pending and will be published in the following days.”

Peligro was an integral member of the Kennedys until the band disbanded in 1986, but he rejoined the group 15 years later in 2001.

The group had only recently returned from a European tour that included stops in Poland, Germany, and France.

He replaced Ted (Bruce Slesinger), who departed in 1981 to become an architect, as the band’s drummer.

Peligro has performed with the band as recently as 2019 and appears on twelve of their albums.

Peligro performed for the Red Hot Chili Peppers when the band disbanded, but he was replaced two years later due to drug and alcohol problems.

Despite his difficulties, Peligro remained a band member’s friend and assisted him in getting sober.

“You have become my dearest buddy on so many occasions of every kind. We had so much pleasure and happiness while we had each other’s backs. I adore you with my entire being. You are the most authentic rocker and an integral component of rhcp’s past. You live forever in our hearts, you crazy man, you joy-bringer, you man with a gigantic heart, D H P. I will always honor you. Rest in peace and be liberated from all that bound you.’

Peligro worked with a number of other punk bands and also pursued a solo career, releasing three albums, the most significant of which being Sum of Our Surroundings, which was named Rock Album of the Year by the American Independent Music Awards.