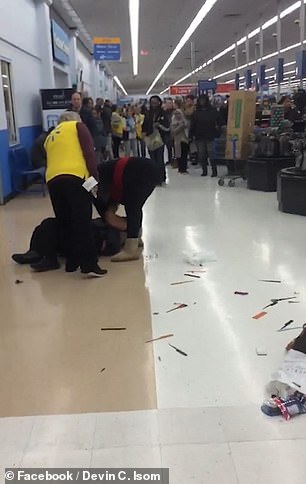 Tuesday night, chaos broke out at a Walmart self-checkout in Ferguson as up to 25 individuals got into altercations and twice set off fire extinguishers.

A minor issue that was handled internally without involving the police preceded the brawls.

Large groups of individuals can be seen fighting, kicking, and striking each other in a video that was shot in the grocery chain off West Florissant Avenue and has since gone viral.

As fights break out, things are hurled, and some of the participants are seen beating one another with what seem to be large items.

Throughout the whole film, shouting and cursing can be heard as vicious fights continue.

The conflicts seem to have ceased by the time the video concludes, and groups of people are seen leaving the shop.

Involved in the fights, according to Ferguson Police Chief Frank McCall, were between 10 and 25 persons.

I’ve seen some footage on social media, and it’s awful, McCall said in a statement to News 4. I’ll tell it to you straight.

No one has been reported wounded and no arrests have been made in connection with the clashes.

Around 9 o’clock at night, the second incident broke out when officers arrived at the business.

However, by the time they arrived, everything had already started to quiet down. Officers are examining CCTV footage that Walmart has given from inside the shop.

Some of the combatants have been recognized by police, according to McCall.

We also have Walmart as a victim, and I’m sure they’ll pursue legal action since they too sustained some property damage, he added.

Similar occurrences have already occurred at same Walmart, prompting calls for the store to closure from customers and locals.

Despite the fact that the store had its own security, it was unclear at first whether they were there when the fights broke out, although several cashiers seemed to be there.

According to McCall, the activity does not constitute a public nuisance for the locals.

And he said that any Walmart location or other establishment in America may have been the site of the incident.

According to him, it relies on all of the interested parties. McCall stated that this kind of aggression is prevalent in many American firms.

Police, according to McCall, aim to put an end to acts of aggression like those seen on camera.

According to him, in order to prevent occurrences like the Walmart brawl, there has to be responsibility, visibility, and security that is prepared to call the police in case of an emergency.

The event is still being investigated by police.

»Customers fight at self-checkout in Mall«