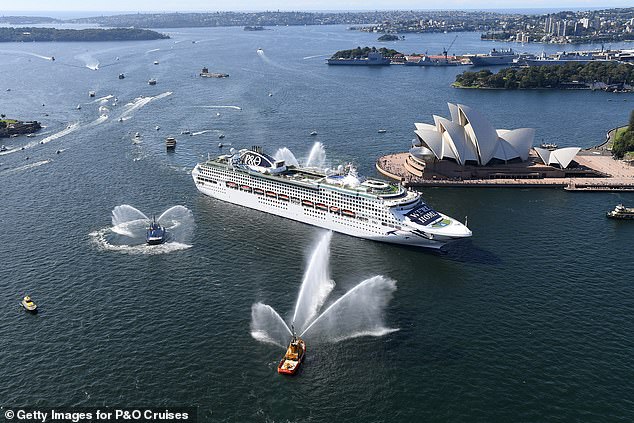 Cruise liners are once again allowed to carry passengers in Australia after a ban put in place in March 2020 as the Covid pandemic began was lifted on Sunday.

Ponant cruise line’s Le Laperhouse will soon follow and sail between Darwin and Broome from April 28 during the peak Kimberley tourism season.

‘This is the culmination of two years of hope and optimism and a lot of hard work,’ a tearful Carnival Australia and P&O Cruises Australia chief executive Marguerite Fitzgerald said.

The Pacific Explorer was marooned in Cyprus during the pandemic and will spend six weeks being re-provisioned while the 600-strong crew is trained up.

The first voyage will be a four-night cruise between Sydney and Brisbane.

‘This is a symbolic moment for Australia,’ Tourism and Transport Forum chief executive Margy Osmond said.

‘The pictures of the ship arriving will send the message around the world that Sydney is open for business – not just for cruising but for all tourism.’

NSW, Queensland, and Victoria outlined testing and vaccination rules for both international passengers and crew, paving the way for the return of the ships.

Tasmania and SA are still reviewing their rules and ships are restricted to smaller domestic vessels carrying up to 99 passengers.

Interstate cruise ships with up to 350 passengers are allowed to dock in Western Australian and the Northern Territory with international liners to follow later in 2022.

Cruise Lines International Association said the lifting of the ban would be followed by a ‘carefully managed resumption of operations’.

The industry in 2019 supported about 18,000 jobs and generated about $5billion in direct and indirect revenue for the Australian economy, CLIA managing director of Australiasia Joel Katz said.

The cruise industry fell under much scrutiny early in the pandemic.

A day before the ban on the ships was brought in on March 19, a group of 2,700 passengers from the Ruby Princess were allowed to disembark in Sydney Harbour.

The results of Covid tests on some passengers were still pending with 600 passengers later confirmed to have the virus, many of whom had since travelled interstate.

An inquiry found NSW Health had responsibility for the passengers and largely absolved Border Force officials.

The Queensland Government is particularly relying on the cruise industry to boost the economy with a number of infrastructure projects.

These include a recently completed upgrade at the Port of Brisbane, a $127million project to widen and deepen the Cairns shipping channel, and a $232million upgrade to the Port of Townsville

The re-opening of Australian waters to international cruise ships coincides with more than 41,000 new Covid cases reported across the country on Sunday.