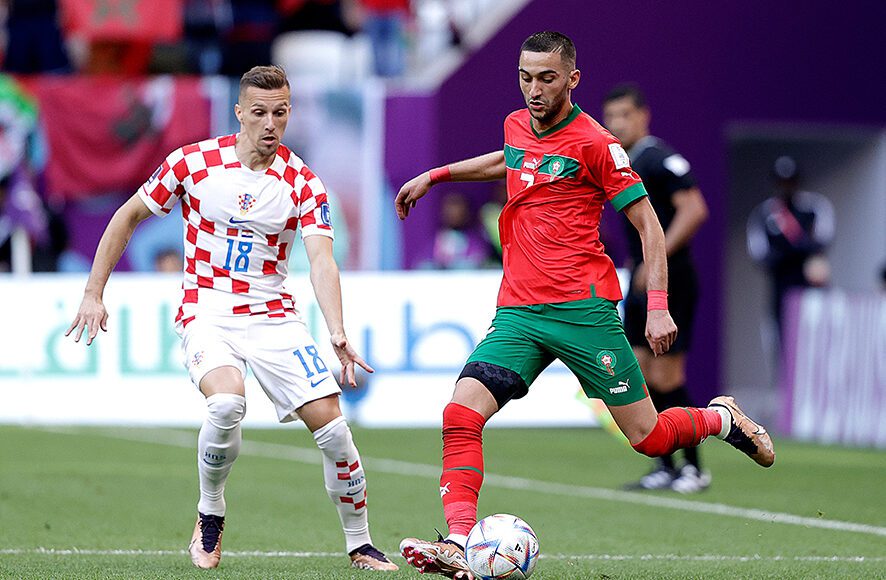 In the third-place match at Khalifa International Stadium on Saturday, Josko Gvardiol and Mislav Orsic scored in the first half to lead Croatia to a 2-1 victory over Morocco. As a result, Croatia secured a set of bronze medals.

Zlatko Dalic’s squad rebounded from their 3-0 semi-final loss to Argentina to finish third in a FIFA World Cup for the second time, having also finished in third place at France ’98. When these teams first met 24 days ago in their initial group match, few would have anticipated they would meet again on the tournament’s final weekend. There has never been a third-place play-off that ended in a scoreless draw, and their reunion exploded with two early goals, both from set plays.

The first goal was scored by Josko Gvardiol, who beat Morocco’s goalkeeper Yassine Bounou with a powerful header after a superbly executed free kick by Ivan Perisic, who nodded the ball over the penalty area. It was Perisic’s fifth World Cup assist.

Morocco equalized almost immediately after a wide free-kick by team captain Hakim Ziyech, making his 50th appearance. The ball rebounded off the head of Luka Modric on the edge of the penalty area and landed within the six-yard box, where Achraf Dari scored his first international goal with a diving header.

Even though Modric challenged Bounou with a low shot, Walid Regragui’s side were arguably in control as the first half neared its conclusion. Morocco have thrilled both the African and Arab nations with their extraordinary march to the semifinals. However, Croatia regained the advantage right before the halftime break.

Bilal El Khannouss, making his debut for Morocco, won the ball on the outskirts of his own penalty area, only to lose it to Mateo Kovacic. Mislav Orsic received the ball quickly on the left side of the penalty area, and he curled a beautiful first-time shot over Bounou and inside the far post.

Throughout the majority of the second half, Croatia appeared to be the more likely team to score, with Kovacic coming closest for the Balkan side in the 87th minute when he shot wide of the far post.

Youssef En-header Nesyri’s that landed on the top of the goal late in stoppage time was the only time Morocco genuinely threatened an equalizer. For Croatia, the task was completed.

Gvardiol entered the semi-final widely regarded as one of the top central defenders on display at Qatar 2022. His performance included a goal-saving tackle on Romelu Lukaku that helped Croatia advance at the cost of Belgium.

Yet, the 20-year-old Leipzig defender returned to Croatia’s camp on Tuesday night having been bamboozled by Lionel Messi’s brilliance, having been turned inside out by the tiny magician in setting up Argentina’s third goal.

Gvardiol redeemed himself by scoring his first World Cup goal with a direct-from-practice free-kick routine. Gvardiol scored on a diving header following a Majer free-kick to Perisic, who was racing away from the goal, and flexing his neck muscles excellently to direct the ball back towards the penalty spot.

Moreover, with his goal, he became his nation’s youngest World Cup scorer at 20 years and 328 days. He may have been wearing a mask in Qatar, but he will now return home with a far more publicly recognized face and identity. – Fifa.com