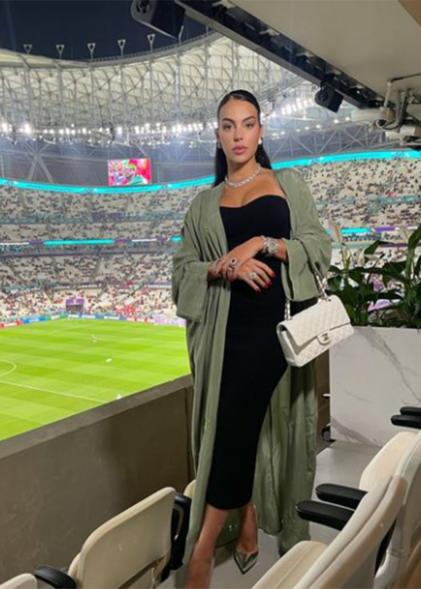 Georgina Rodrguez, the girlfriend of Cristiano Ronaldo, expressed her disappointment on social media after the star forward was benched for Tuesday’s 6-1 victory against Switzerland.

The 28-year-old model shared images of herself in a VIP suite at Lusail Stadium on Instagram with the statement “what a shame” that spectators were unable to appreciate Ronaldo’s ability during the World Cup match.

“Congratulations Portugal ♥,” Rodríguez wrote. “While the eleven players sang the song, all of the goals rested on your shoulders. What a pity that we were unable to watch the world’s finest player for 90 minutes. The supporters have not ceased yelling your name and claiming you as theirs.”

Rodrguez then highlighted Portugal coach Fernando Santos, adding, “I pray that God and your wonderful buddy Fernando continue to work together to make us vibrate for one more night.”

Since 2008, Ronaldo failed to start a Portugal match at a tournament for the first time on Tuesday.

Georgina Rodrguez, the girlfriend of Cristiano Ronaldo, posts a video of the pitch during Portugal’s World Cup match versus Switzerland on December 6, 2022.

Ronaldo started Tuesday’s triumph over Switzerland on the bench, although he played 17 minutes without scoring. In the knockout round, his substitute, 21-year-old Goncalo Ramos, scored a hat trick.

After the game, Santos stated that Ronaldo’s future with the squad “has to be determined.”

“I’ve always had a really tight relationship with him,” stated Santos. I’ve known him since he was 19 at Sporting, and when I joined the national team in 2014, he had already begun to improve. Ronaldo and I never confuse the human and personal component with the manager-player relationship. I will always regard him to be an indispensable member of the team.

“This [disciplinary case] is closed and resolved, but it is also essential to consider this player’s past. Because he is one of the top players in the world, all we need to do is work together.”

Following Ronaldo’s response to being pulled off the field during Portugal’s last group encounter, a 2-1 loss to South Korea, Santos benched the superstar. When the forward was substituted in the 65th minute, cameras showed him looking extremely angry.

At the time, Santos expressed displeasure with the film he had viewed.

When asked why Ronaldo was not in the starting lineup, Santos stated, “Andre [Silva] is a great player who plays more advanced, whereas Cristiano is more fixed; he stays in a more determined area toward the box. Goncalo possesses unique qualities. According to the observations I made, he ultimately demonstrated this to us.

“This is nothing new, since he has previously been in two matches, but as Andre has also participated in a prior game, I have three players in whom I have complete faith. For each match, I shall base my tactics on the player I observe. All substitutes can be utilized against Morocco, even if they are not in the starting lineup.

On Saturday, Portugal will face Morocco in the quarterfinals.