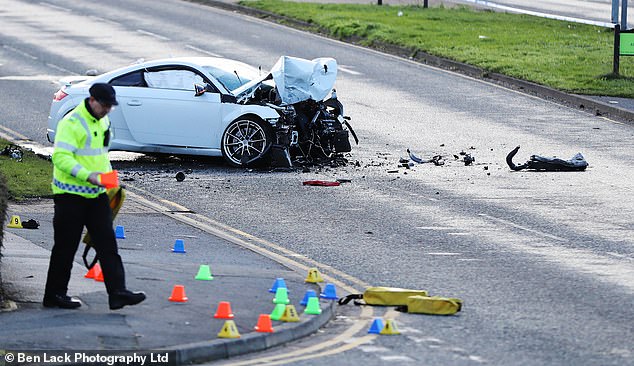 A mother and a child died as a result of an accident involving an Audi TT that collided with the wall of a Jaguar store.

A white Audi was reported to have crashed with the wall of the Vertu Jaguar Leeds showroom on Scott Hall Road, Leeds, soon after 8.30 a.m.

Two persons, a woman and a child, were discovered wounded at the site. They were thought to be a mother and her four-year-old son on their way to school.

Initial police investigations suggest that both victims were pedestrians who were struck by the vehicle prior to its collision with the wall.

Both were declared dead shortly afterwards.

The Audi driver was sent to the hospital for treatment of injuries classified as critical but not life-threatening. He is under arrest.

The Audi is reported to have traveled little more than 200 yards before smashing into the wall of a car dealership after colliding with people.

The duo, who were crossing the street, are thought to be a mother and her four-year-old son.

The dealership has been outfitted with a forensic tent.

An eyewitness said: ‘The entire front of the Audi is missing. The mother and child were pedestrians crossing the road.

‘He set off and 200 yards down the road he struck the two people on the pavement.’

A passerby added: ‘I think it the child was about four. From what people were saying I think it is a boy.’

‘This is an absolutely tragic incident, and we are working to support the family of the woman and child involved.

‘We have already spoken to a number of witnesses but are keen to speak to anyone else who has witnessed the collision itself or the events leading up to it.

‘We would also ask anyone who was in the area around the time of this collision to check their dashcam footage.’

Anyone with information is encouraged to contact the Major Collision Enquiry Team through 101 Live Chat or by dialing 101 and providing the log number 260 of 16/01.

Currently, the road remains blocked as investigations continue at the scene.