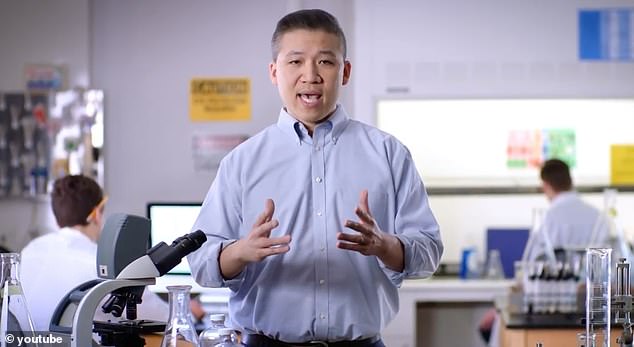 An American academic who claims Australia has gone ‘mad’ and ‘given up’ fighting Covid has been shut down by a local professor fiercely defending the nation’s response to the virus.

Dr Swan warned that 2022 was set to be the worst year of the pandemic for Australia.

This is despite health officials in Australia’s worst-affected states, New South Wales and Victoria, deciding the time was right to lift most restrictions in February this year because of high vaccination rates.

‘Australia has gone from a top zero COVID country to now the TOP #COVID19 country. What madness down under once their leaders gave up for election season,’ Dr Feigl-Ding tweeted.

‘Here is how Australia has kind of given up ahead of its May election,’ he added with an alarming-looking graph showing Covid deaths per one million people.

His claims have since been dismantled in an epic 19-tweet thread from Professor Michael Fuhrer from Monash University.

Prof Fuhrer kicked off his lengthy response to Dr Feigl-Ding by saying ‘There’s no place I’d rather be [than Australia]’.

‘If you live in Sydney or Melbourne, 2022 is absolutely not your worst year of the pandemic.

‘No. No. No. End of story, this is not a controversial statement.

We know what happened, we lived it! Australia didn’t ”give up”.’

He said Australia ‘continues continues to vaccinate, treat, test, and isolate, which are the most important [steps].’

Prof Fuhrer said Australia did the ‘hard yards’ with a ‘successful strategy’ based on lockdowns, border closures, remote schooling and vaccination.

To back up his point, he shared a telling graphic showing ‘case fatality rate’, which on May 9, 2022 said Australians had only a 0.12 per cent chance of dying from Covid – far lower than comparable western nations like the US, Canada, Britain, Sweden, Germany and France.

Prof Fuhrer pointed out the death toll graph tweeted by the American was ‘entirely without context’.

He provided graphs comparing Australia’s low death toll with New Zealand, Iceland and Japan. In them, NZ’s death toll per million people was lower, Japan lower and Iceland was higher.

‘And those are the best countries in terms of total deaths during the pandemic – it’s not clear Australia has ”given up” even compared to the best.’

Prof Fuhrer did concede Australia was doing poorly lately and that the nation ‘could do more’, including ensuring ‘rapid access to treatments, make high quality masks available and improve clean air standards in public spaces’.

On Tuesday, Dr Swan, the ABC’s health podcaster, said Covid deaths could grow to 13,000 in another 12 months, after 5,000 Australians died with the virus this year.

This is the worst year of the pandemic and nobody’s talking about it,’ Dr Swan said on ABC News Breakfast.

In total 7,670 Australians have died from Covid.

Australia’s Covid deaths peaked in January 2022, fell dramatically by mid-March and have been gradually climbing since restrictions were dropped.

Dr Swan was later blasted by 2GB’s Ben Fordham, who said the physician was ‘addicted to peddling fear’ after the doctor compared the low rate of Covid-related deaths in the country to ‘jet crashes’.