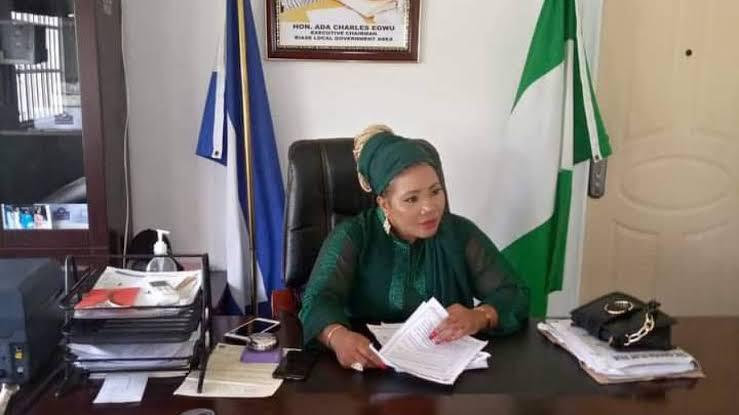 She is vying on the platform of the All Progressives Congress, APC.
Popularly known as “Ada Biase”, Mrs. Egwu, whose mother comes from Akamkpa local government area, is the first woman to seat as Chairman of Biase Local Government.

In an interaction with some newsmen in Calabar, the State capital, she said; “the experience I have garnered over the years in service of the Biase people at different capacities would positively enhance my performance as a federal legislator.”

Understand the people
Mrs Egwu said; “As the first female chairman of Biase Local Government Area I have consistently interacted with the people – women, young people and the elderly. I understand my people because I have served them from the age of 25 years in different capacities.

“Today, my accomplishment as a council Chairman speaks for me.

My interventions in the health and education sectors, tackling hygiene through provision of potable water as well as in agriculture are in line with the demands of the people.”

“I have always been a grassroots person. So, I understand the challenges of my people. As the chief security officer of my local government, I have, with the support of the youths, police and traditional rulers, strived to enshrine peace amongst previously warring communities,” she stated.

Creating Entrepreneurs
Speaking further on plans to tackle the challenges of job creation, the Aspirant stated, “Creating employment is vital to peace and growth of Nigeria’s democracy, I promised the people that I will propose legislation and support bills that would address the economic realities of the grassroots.

“Biase and Akamkpa have vast mineral resources but the people, the communities where these huge mineral deposits are found with more than 40 quarries, benefit nothing from the resources or the companies mining in those areas. I would strive for a change.

“Besides pursuing that I would promote vocational training and support more people especially women and youths to be entrepreneurs. For most of those at the national assembly, who do empowerment programmes in Cross River State, men are usually the greatest beneficiaries, very few women get something.”

“But, with me at the green chambers in Abuja, my sisters in Akamkpa, where my mother is from and those in Biase would benefit as much as the men if not more. After all, the voting demographics show that women voters are more and should be properly included in the scheme of things.

“This would further reduce social tension and maintain peaceful co-existence. For the youths, I will continue to enable them access the economic empowerment programmes of the Nigerian Government. The world has moved from a search for white collar jobs to creating entrepreneurs,” Mrs Egwu explained.
A bridge builder

Mr Egwu said that the people of the constituency gave her the encouragement and support to reach for the position due to her firm stance as a bridge builder.

She said; “The body language of people of Akamkpa towards my aspiration is very welcoming. They encouraged me and said we have never had a woman on that seat. They also said they have seen the way I lead my people. They have seen what I have done in my local government and they said we need to push this woman further.

“I recently got an award from the Arochukwu people in Abia State. I am not from Abia State yet the clan can single me out as a council chairperson in Cross River deserving of honour as a peace and bridge builder,” Mrs Egwu said.
She appreciated the State Governor, Professor Ben Ayade and his Deputy,  Professor Ivara Esu for giving her the platform to showcase herself and offer credible service to the Biase people.

Mrs Egwu is the first woman to aspire to represent the people of Biase-Akamkpa in Nigeria’s green chamber.