Skip to content
Home » News » News » Cost of living crisis: Crisps could rise by up to 2.2 per cent – due to Russia’s invasion of Ukraine 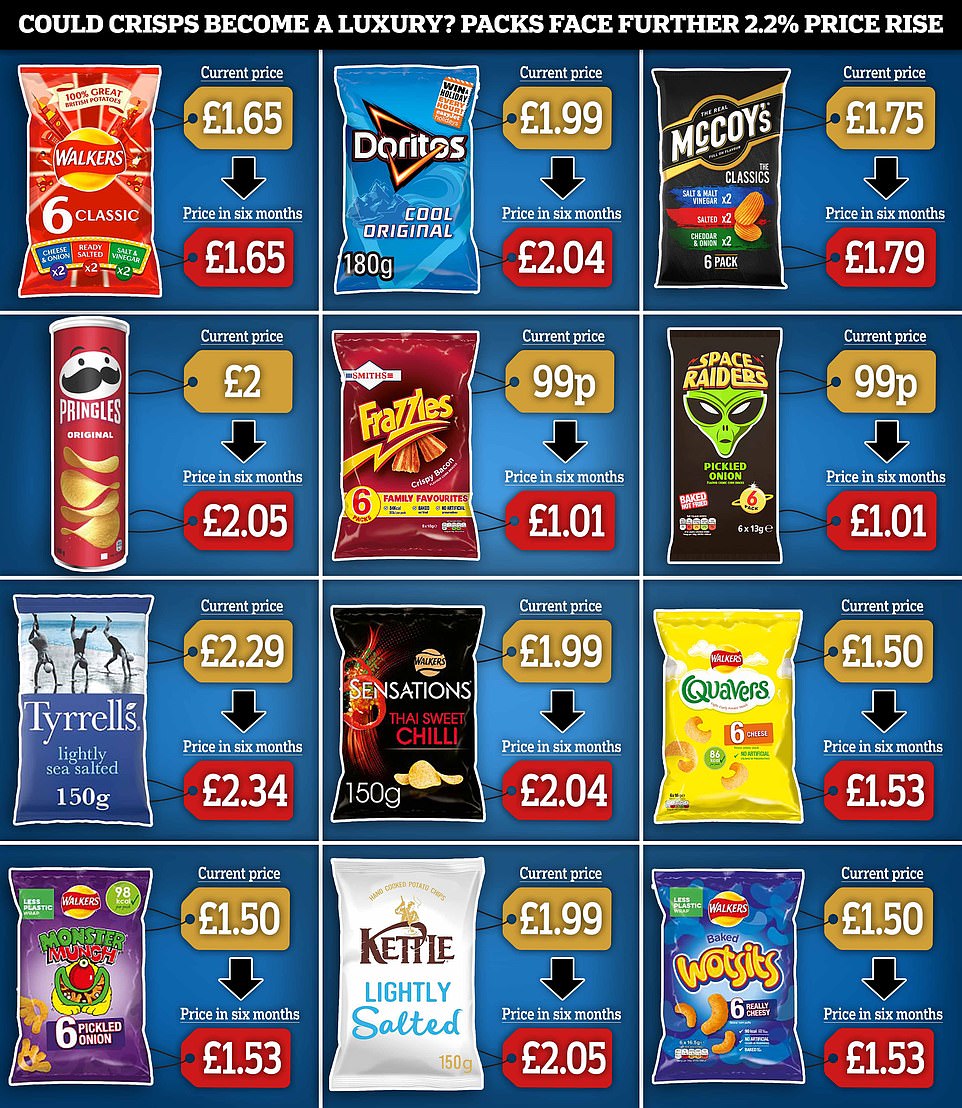 ritons already facing a cost of living crisis could have to rustle up more cash for a bag of crisps, with experts warning of a 2.2 per cent price rise.

Prices of the salty snack have already been driven up by 9.6 per cent in the last 12 months due to a spike in the cost of potatoes, increased energy costs and post-Covid supply issues.

But now consumer experts have warned Britons to brace for a 2.2 per cent rise in the average cost of crisps within six months.

An increase in the cost of cooking oils due to Russia’s invasion of Ukraine – from where the UK imports most of its sunflower oil – is being blamed for the price hike.

It means customers could see the average price of a six pack of Walkers crisps rise to £1.69 in the coming months, with prices currently around £1.65 in some supermarkets.

But while any price rises will likely be a matter of pennies, it will be yet another cost increase on Britons, who are already facing huge increases on their gas bills, as well as a National Insurance rise and spiralling inflation rates of around 7 per cent.

It will particularly hit already hard-up parents trying to keep the costs of snacks and school lunches down as they tackle even bigger bills this year.

Meanwhile, trade magazines have even suggested crisps could become a ‘luxury’ due to the ‘perfect’ storm of problems facing snack-makers, including the ‘eye-watering’ costs of raw ingredients.

Consumer experts have warned Britons to brace for a 2.2 per cent rise in the average cost of crisps within six months. Pictured: A graphic showing how prices on could look if there is a 2.2 per cent price rise. *Current prices are based on non-deal prices from Tesco according to comparison website Trolley.co.uk as of April 18, 2022 **Six month prices are estimates based on current prices with a 2.2 per cent increase, rounded up and down to the nearest pence

Around 80 per cent of the global supply of sunflower oil comes from Ukraine and Russia, but the ongoing conflict has disrupted supply. Pictured: Empty shelves at a Tesco star in Cambridge earlier this month

According to price comparison website MySupermarket, average crisps prices could rise by up to 2.2 per cent in the next six months.

Such a rise could see a 4p increase in multi-packs of classic Walkers, an a 5p increase in the cost of a 200g tin of Pringles.

Upmarket crisps like Tyrells, which are usually priced around £2.29 for a 150g bag when not on offer, could increase to £2.34, while Kettle crisps could also rise by around 5p to £2.05.

So how could crisp prices look on popular brands in the next six months with a 2.2 per cent rise?

*Current prices are based on non-deal prices from Tesco according to comparison website Trolley.co.uk as of April 18, 2022

**Six month prices are estimates based on current prices with a 2.2 per cent increase, rounded up and down to the nearest pence.

Multi-packs of classic crisps like Space Raiders and Frazzles have remained steady at 99p for some time. And supermarkets are unlikely to raise prices to £1.01 – the cost it could rise to if prices increase by 2.2 per cent.

Meanwhile, Frazzles are likely to be immune from the big ingredient cost rises, as they are made out of maize, rather than potato, and cooked with rapeseed oil, rather than sunflower oil.

Prices for food, clothing, gas and electricity and fuel have all soared as the pandemic ends – a situation worsened by Russia’s invasion of Ukraine last month.

According to data firm Kantar, the average price of crisps have already risen by 9.6 per cent in the last 12 months.

Data from commodity analysts Mintec shows that the cost of potatoes has been rising at a hefty rate, with the cost per metric tonne increasing 166per cent year on year.

Mintec put this down to a combination of factors. The easing of Covid restrictions has seen demand for processing potatoes recover in foodservice over the past year – putting pressure on supply.

At the same time, farmers had taken a more cautious approach to planting in the wake of the pandemic, which resulted in a ‘lower planted area.’

On top of this, potato growers are struggling with the wider rise in fertiliser and energy costs. There have also been an increase in labour costs following Brexit and Covid, with farmers increasing wages by up to 60 per cent last summer to almost £20 an hour to combat a chronic labour shortage.

Now snack makers are also facing an increase in the cost of sunflower oil due to Russia’s invasion of Ukraine.

Edible Oils, Britain’s largest cooking oil bottler, last month warned of a shortage of sunflower oil. The company said 80 per cent of the global supply of sunflower oil comes from Russia and Ukraine.

And president of the National Edible Oil Distributor’s Association Gary Lewis said rapeseed oil prices have risen ’50 to 70 per cent’ since Russia’s invasion.

Meanwhile, Kim Matthews, commercial director at Edible Oils, told the BBC last month: ‘At the moment, Ukrainian farmers should be sowing the seeds now for the harvest in October and November.

‘Clearly that’s not going to happen…. we’re probably going to miss the season so we could be impacted for 12-18 months.’

He said it is unclear as to when supply will return to normal, pre-war levels. Sunflower oil can be found hundreds of products on supermarket shelves, including ready meals, biscuits and mayonnaise. It is also used, alongside other oils such as rapeseed, to cook crisps.