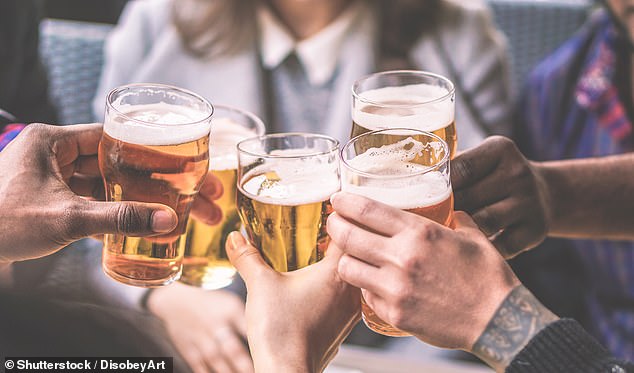 In a social media discussion in response to a returning expat’s horror at the prices in Australia, the perilous balance many are forced to tread in order to endure out-of-control inflation was exposed.

The post by Reddit user jiggjuggj0gg has received 1600 responses, with many revealing their own struggle to make ends meet or how escalating costs have driven them to forgo their life ambitions.

The post reads, “Thanks to the pandemic, I’m back in Australia after three years away.”

A returning expat’s astonishment at the high pricing in Australia, such as $10 beers at ‘happy hour,’ prompted him to inquire about how people are coping (pictured stock image)

An expat Reddit member was startled to find that everything was twice as expensive in Australia as it was before Covid.

Everything is around twice as expensive. Some items are absurdly and ridiculously pricey.

‘I am aware that wages are rather high here, but… not that high?

How are you people living out here? A large many of us are not,’ remarked one Reddit member.

‘Yes. I mean, it’s really evident to anyone who walks through the central business district,’ responded another.

One user stated, “I recently took my two daughters bowling, and it cost me over $100 for two games, a drink for each, and chips for the three of us.”

Some admitted to walking a precarious line of existence.

Another responded, “I’m doing well, but what used to cost $40 per week in groceries now costs about $120.”

My insurance premiums have jumped by 40% during the past two years. Rent 55%. I have eliminated ALL discretionary expenditure, despite having a full-time job and a respectable income. No longer will I even get myself a drink from the servo. Essentially, what is the point? I spend 99 percent of my spare time at home.

Another responded, “It’s getting tough.”

Last week, our weekly shopping bill was $320, and my spouse cried in the car on the way home. I have no idea what we would do if I was unable to work overtime as necessary.

A number of individuals admitted that they were unable to date or have a social life because they could not afford it.

“I stay at home, I’m single, and I’m hungry, and it generally works,” read one response.

Another individual stated, “I can only afford a roof over my head because I am in a relationship.”

Some individuals stated that they were abandoning the ‘great Australian dream’ of homeownership because they believed it was out of their financial reach.

One individual stated that economic necessity had compelled them to return to a condition of domestic violence.

“Left a situation of domestic violence with children only to be threatened with destitution, so returned for a while.

I’m now living on the road with my two children under the age of two after purchasing an inexpensive (still a few thousand dollars) caravan.

It is less expensive than renting, plus I do not need to deal with landlords. Things are still difficult, but occasionally I have savings, which is good.’

According to the most current data, there appears to be little comfort in sight for individuals who are experiencing bill shock, as inflation continues to rocket.

Some indicated they had given up on the “Great Australian Dream” of home ownership because they believed it was unattainable.

One added, “Housing is so unaffordable that people literally don’t care about their savings or debt.”

Another added, “I have just abandoned any hope of owning a home or having children, which five years ago were my primary life goals.”

“Knowing that I have almost nothing to look forward to is incredibly disheartening, so I might as well spend my savings and enjoy what I can,”

Others acknowledged that the likelihood of having a family was diminishing.

I walk home 3-4 evenings each week as opposed to taking public transportation.

I have my own herb, fruit, and vegetable container garden.

I cannot afford to date, marry, or have children, so I no longer make the effort.

I have a master’s degree and a full-time position in middle management. Likewise a mortgage.’

The Australian Bureau of Statistics’ monthly consumer price index revealed persistently high inflationary pressures, with housing contributing the most to the November data.

Staying hungry won’t assist you psychologically or physically, so stock up on vegetables, which are dirt cheap, and five servings of meat won’t set you back much.

‘Pork is comparably inexpensive to slow-cooked, lower-tier beef cuts. Purchase a whole chicken, portion it out, and freeze portions for multiple meals. Being at home saves the most money. Online social gaming provides a social fix.

A number of individuals stated that they were currently spending their funds because home ownership appeared unattainable.

“Shop shrewdly. I am familiar with the meat reduction times at my local stores and often stock my freezer with meat discounted by 90%,’ they stated.

The phrase ‘Coles and Woolies’ I shop each week’s half-price specials and load up on enough items to last about a month. Buy only seasonal fruits and vegetables.

“I eat out infrequently, and if I’m too lazy to prepare, I discover deals. Recently received a 40% discount on Doordash; if you opt for pickup instead of delivery, you can obtain inexpensive takeout. Frugal nourishment is your ally.

Inflation rebounded to 7.3% in the 12 months leading up to November, from a reading of 7.1% in October, suggesting little price relief is on the horizon.

The Australian Bureau of Statistics’ monthly consumer price index indicated that inflationary pressures remained elevated in November, with housing contributing the most to the reading.

In the 12 months leading up to November, housing costs climbed by 9.6%, food and beverage expenditures increased by 9.4%, and transportation costs increased by 9%.