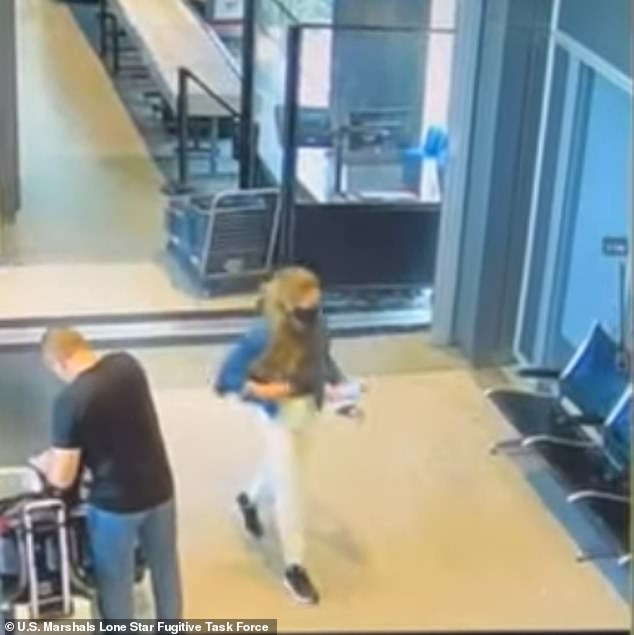 Kaitlin Armstrong, the yoga instructor suspected of killing her boyfriend’s partner, is believed to have departed Texas for New York City.

According to the US Marshals Lone Star Fugitive Task Force, Armstrong took a flight from Austin-Bergstrom International Airport to Houston Hobby Airport on May 14, just days before an arrest warrant was issued for her in connection with the murder of elite cyclist Anna Moriah ‘Mo’ Wilson, 25, and then a connecting Southwest flight to LaGuardia Airport in New York.

Authorities, who are pursuing a fugitive investigation into Armstrong, revealed surveillance footage of the 35-year-old on Wednesday.

The individual is seen at Austin-Bergstrom International Airport wearing a black mask covering her face, a denim jacket, a black shirt, white jeans and carrying what appears to be a yoga mat on her shoulders.

Scroll Down For Video:

Wilson, 25, was found dead in an apartment in Austin on May 11 shortly after going swimming with fellow cyclist and Armstrong’s boyfriend, Colin Strickland.

A police tipster, who did not want to be identified, earlier told investigators that Armstrong flew into a rage on discovering cyclist Strickland’s romance with fellow cyclist Wilson in January 2022.

The informant told police: ‘Armstrong became furious and was shaking with anger. Armstrong told the caller Armstrong was so angry Armstrong wanted to kill Wilson.’

Strickland told police that he purchased two 9mm handguns for him and Armstrong around that time.

Authorities believe that Strickland and Wilson continued their relationship, something that Wilson’s family denies.

That tipster got in contact with cops on May 14, three days after Wilson was murdered. Armstrong was subsequently questioned by cops, and freed due to a technicality.

On the night of her death, Wilson had a secret pool date with Strickland after he lied to his girlfriend about dropping off flowers to a friend, it is claimed.

Armstrong is said to have found out about that pool date, and is accused of shooting Wilson shortly after. The alleged killer’s black Jeep was filmed in the vicinity of the house where Wilson was killed around the same time she was murdered.

Strickland dropped Wilson off at 8.30pm at a friend’s home in East Austin.

Armstrong did not arrive back at the house she shared with Strickland until 9.20pm, he told police.

Neighbor, David Harris, 47, said said he did not hear any gunfire on the night of the murder.

‘I think I would have heard gunshots next door if she was using a 9mm so the shooter must have used a suppressor,’ he told the US Sun.

‘You have to be careful with those redheads, man.’

Around the time of the shooting, Harris said that he was in his garage, partially lifting up the door.

Harris also said that he heard someone leave their apartment building around the time of the killing on a bicycle.

He said: ‘I heard somebody leave but I didn’t see anyone with my own eyes.’

He continued: ‘I had the sense that a bike was leaving. It was not a motorcycle. Maybe it was Armstrong leaving on the bike and she wanted to make it look like a theft.’

The only thing missing from Wilson’s room was her bike, which investigators said they found in a bamboo thicket more than 60 feet from the house.

Wilson was in town to prepare for a race but Harris said he didn’t know she was staying in the apartment and that he never met her.

He did say the woman who owns the apartment is ‘pretty shook-up.’ ‘She’s probably not going to live there anymore,’ he added.

Harris said 9mm silencers retail for anywhere between $500 and $900 in Texas which is one of the 42 states where it is legal own a silencer.

In 2021, Texas Governor Greg Abbott signed a law that removed that made it easier for gun owners to buy silencers in the state.

Previously, as in most states, ATF regulations mean that it can take up to 8 months for gun owners to get their hands on silencers after they have bought them.

A 9mm pistol typically produces 160 decibels of sound. On average, with a silencer, that is reduced to around 125 decibels.

Another neighbor said that she didn’t notice any gunshots and that her dogs only became agitated when emergency services arrived at the scene.

That neighbor said it was her surveillance camera that caught a car leaving the scene after the killing.

She said: ‘It’s lucky that my camera caught her car because it isn’t on all the time. It gets triggered when cars drive by but not always. It was just her bad luck. If she planned the whole thing she should have figured out that there [are] cameras around.’

On May 17, the firearm located at Strickland’s residence was ‘test fired’ and police have determined it had significant potential’ that that gun could have been used in the crime.

Investigators are also probing whether exercise app Strava led Armstrong to Wilson’s location. It is used by runners and cyclists to share exercise routes, and Wilson’s profile – which has now been deleted – was publicly visible.

She uploaded a cycle route beginning and ending at the Austin property where she was staying on May 11, the date of her death, disclosing her location.

Armstrong’s profile has recently been changed from public to private, although it’s unclear if she made that change herself.

Strickland later issued a statement, and insisted his relationship with Wilson was ‘platonic and professional.’

He wrote: ‘There is no way to adequately express the regret and torture I feel about my proximity to this horrible crime.’

He said he was cooperating fully with the police.

‘I admired her greatly, and considered her a close friend,’ he wrote. ‘I am deeply grieving her loss.’

Wilson was seen as a rising star in the sport.

She had just turned professional, leaving her job at California-based bike company Specialized, and weeks before had taken the first lead for elite women in the Life Time Grand Prix off-road series.

She had a busy season of racing ahead of her, with competitions across the United States and in East Africa.

Her father, Eric Wilson, was in the U.S. ski team, while her aunt, Laura, competed in the Olympics as a cross-country ski racer.

In a statement, her family said: ‘While the tragic loss of Moriah is unfathomable, at the same time we want everyone to join us in celebrating her life, accomplishments, and love for others.

‘Always pushing tirelessly to reach her goals, we knew she was pursuing that which she loved. We will miss her terribly and know that all mourn her with us.’

The family has started a GoFundMe page with the goal of raising $100,000 to ‘to help fund community organizations that help youth find self-confidence, strength, and joy through biking, skiing, and other activities that Moriah was passionate about.’

She skied competitively throughout her youth, continuing to compete at Dartmouth College, where she also played soccer.

She graduated with a degree in engineering.

‘She was talented, intelligent, gentle, fast, focused, and graceful.

‘She had a poise and inner strength that is so rare in any human, especially one as young as 25.

‘There was a bubble of positivity and joy around her, and we all wanted to be in her bubble.’