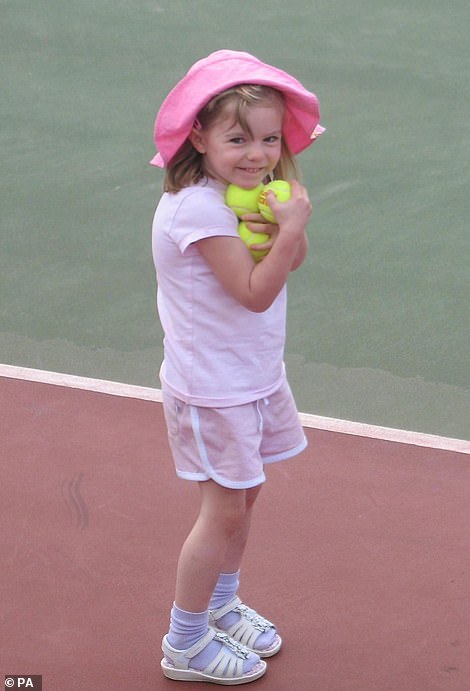 Convicted German rapist and paedophile Christian Brueckner has sensationally been made an ‘official suspect’ in the disappearance of Madeleine McCann – on the eve of the 15th anniversary of her disappearance.

Brueckner, 44, who has been linked to four other child murders across Europe since 1996, was sensationally named by German prosecutors as the man ‘responsible’ for Madeleine’s kidnap and murder in June 2020. But since then no charges have been brought.

Last night respected German daily Bild claimed he has had been made an ‘arguido’ – an official suspect in the case by police in Portugal, which is usually the precursor to charges. It brings new hope that one of the world’s most harrowing unsolved crimes could still be closed.

Brueckner, a convicted paedophile, is currently languishing in a German prison for the rape of a 72-year-old American tourist in Portugal just 18 months before Madeleine was abducted. He was known to break into Algarve hotel rooms and apartments to supplement his income from drug dealing, and left the south of Portugal suddenly in 2007 – the year Maddie vanished – after more than a decade living there.

He is alleged to have admitted abducting Madeleine to a friend in a bar – and German investigators are said to firmly believe he killed the three-year-old – but do not have the evidence to charge him with Scotland Yard said to believe that officers in Europe may be relying on an unreliable witness.

Maddie’s parents Gerry and Kate are yet to comment on the decision to make Brueckner an ‘arguido’ – but they have never given up hope their daughter, who would now be 18, is still alive.

Last night there was confusion as news agency AFP reported that a person had been ‘charged’ by German authorities over the crime at the request of Portuguese police.

Brueckner’s lawyer Friedrich Fulscher denied to MailOnline he had been charged, and late on Thursday AFP corrected their story to say a person had been made a suspect in the case. But making Brueckner an arguido is still a significant development in the mystery that began with Maddie’s abduction on May 3, 2007, with senior officers who worked on the case predicting that a murder charge could follow.

Police in Portugal are thought to have acted in the last few days after it emerged that he could avoid charges due to Portugal’s statute of limitations which kicks in for serious crimes after 15 years.

The move by Portuguese authorities last night could now allow Brueckner to be transferred to the Algarve for formal questioning. But Bild reported that Brueckner’s lawyer, Friedrich Fuelscher, believes the Portuguese decision appeared to be a ‘procedural trick’.

One well-placed source said: ‘The legal grounds for making Brueckner an arguido include the fact that he allegedly confessed to a friend he had snatched Madeleine and mobile phone records placed him in Praia da Luz the night she vanished.

‘But it is obviously linked to the fact that the Portuguese authorities want to keep their options open with the 15-year deadline looming.’

Jim Gamble, the former head of the Child Exploitation and Online Protection Centre (Ceop) who worked on the investigation into the child’s disappearance, told BBC Breakfast: ‘Well, this breakthrough could mean everything or it could mean nothing.

‘My own gut feeling on it – from the moment the Germans began to release information two years ago – was that this was the best fit.

‘You have proximity, you have opportunity, and you have a profile with regards to an offender that absolutely fits in a way that no others have.’

He added: ‘This is all positive. And from my own position, and I wouldn’t be surprised if charges did follow.’

On Thursday evening Portuguese sources said Brueckner had been informed of his new ‘arguido’ status in Oldenburg Prison in northern Germany where he is serving seven years for raping an American pensioner in 2005 in Praia da Luz.

It gives Portuguese authorities the ability to charge him further down the line by effectively ‘stopping the clock’ on the time limitation for bringing a prosecution if German prosecutors decide they haven’t got enough evidence to charge the paedophile they regard as their prime suspect.

A written statement issued by the Portimao section of the Faro Department of Criminal Investigation and Prosecution (DIAP) late last night, titled: ‘Maddie case. Constitution of an Arguido’, and said: ‘As part of the investigation into the circumstances surrounding the disappearance of Madeleine McCann in 2007, a person was made an arguido on Wednesday.

‘The man was made an arguido by the German authorities in execution of a request for international judicial cooperation issued by the Public Ministry of Portugal.

‘The inquiry is led by the Portimao section of the DIAP in Faro with the assistance of the Policia Judiciaria police.

‘The investigation has been carried out with the cooperation of the English and German authorities.’

The country’s PJ police force has yet to officially comment.

Next month will be the 15th anniversary of then three-year-old Madeleine’s disappearance from the Portuguese Algarve resort of Praia da Luz where she was on holiday with parents Kate and Gerry on May 3, 2007.

Portuguese police would have had to charge him by the anniversary of her disappearance on May 3 in less than two weeks or face a seriously reduced risk of convicting him.

According to Portuguese law, crimes punishable by more than 10 years in jail, which covers kidnap and murder must be heard within 15 years.

Shortly after she disappeared Kate and Gerry, from Rothkey, Leicestershire, were also made arguidos in the case and questioned at length several times before they were cleared of any involvement.

Portuguese police chief Gonçalo Amaral who led the initial investigation and ordered the couple to be made official suspects was later taken off the case.

Bild quoted Brueckner’s lawyer Friedrich Fulscher saying: ‘The step taken by the Portuguese authorities should not be overrated.

‘Without knowing the Portuguese legal situation in detail, I assume that this measure is a procedural artifice to stop the statute of limitations threatening in a few days.’

Brueckner stayed silent after being informed he had been made an arguido and declined to be questioned as part of the Portuguese criminal procedure.

It is not yet clear who told him he was being given arguido status but it happened after a formal international letter of request issued by Portuguese authorities to their German counterparts.

The Portuguese move paves the way for him to be flown from Germany to the Algarve for formal questioning but there are not thought to be any immediate plans to try to quiz him in Portugal.

It is understood German investigators are currently focusing their efforts on forensic work on the VW camper van Brueckner used while he lived on the Algarve which featured in a police appeal about the convicted rapist’s vehicles.

Last week Brueckner wrote exclusively to MailOnline revealing he still had not been officially questioned by German investigators about Madeleine’s disappearance.

He is currently serving seven years in Oldenburg prison, northern Germany, after being convicted of raping a 72-year-old woman in 2005 in the Portuguese report of Praia da Luz, from where Madeline vanished two years later.

In his letter – the first to a British media organisation – he said:’ I haven’t been questioned on any allegations as required by German law, but it is obvious the German authorities and especially the Department of Justice, are providing the media with information about me that is likely to make me appear contemptible.

‘This also applies to the authorities at the correctional facility in which I am currently being held.’

Then taking a swipe at the investigators he said: ‘By now it should be most obvious to anyone with halfway reasonable thinking that the German authorities are trying by all means necessary to cover up the mistakes that have been made.

‘By ‘mistakes’ I mean blatant violations of German criminal law and international human rights. This statement on my part has so far only been laughed at as ‘wailing’ which gives me an approximate insight into the hopeless situation of the Jews, or in general, of the minorities in the Second World War.’

In his letter Brueckner makes no direct mention of Madeleine but highlights how he is constantly hearing he is being investigated for various sex crimes but that no one from the police has interviewed him about any of them.

Besides the McCann investigation, Brueckner is also being probed over the 2004 rape of Irish tour rep Hazel Behan, who has waived her anonymity, and a sex assault on a ten-year-old girl at Praia da Luz just a month before then three-year-old Madeleine vanished.

German authorities are adamant they have the right man, although Scotland Yard, who last month announced they were winding down their 11-year investigation into Madeleine’s disappearance codenamed Operation Grange.

Privately they are said to be dubious of any charges against Brueckner, as the only evidence against him appears to be circumstantial and from unreliable witnesses.

However German prosecutors have insisted they will continue their investigation even though they admit they have no idea if it will end with him being charged.