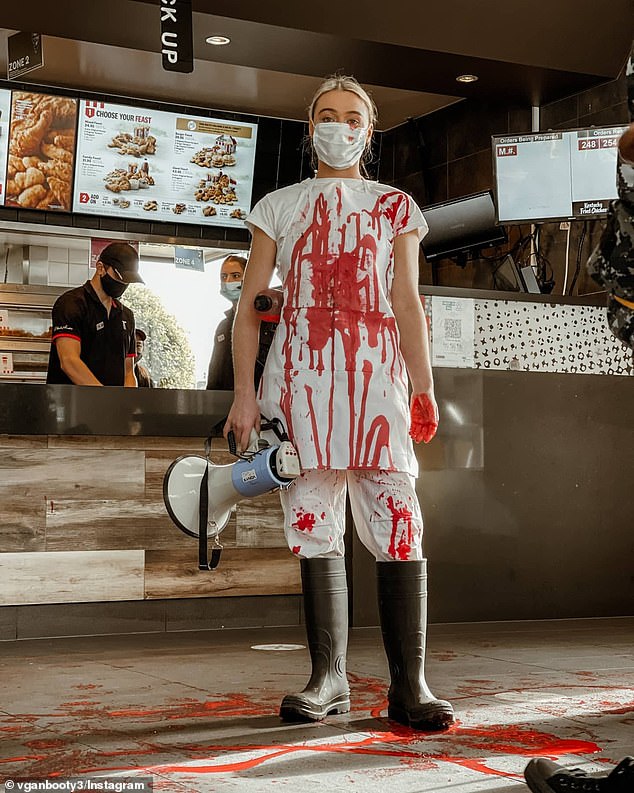 Following a nine-month ban from every bar and restaurant in the state, a divisive vegan activist has threatened to permanently leave her home in Western Australia.

Tash Peterson, 28, claimed that after receiving a notice banning her from licensed places in her native state, her ‘right of speech’ had been taken away.

The Perth activist said in a video posted on Facebook on Sunday that she and partner Jack Higgs were “getting the f**k out of WA” and had purchased one-way tickets to Melbourne.

On July 13, the two will arrive in Melbourne, where they want to stay for one week before departing for Sydney.

We’re willing to disturb society and breach the law to shed awareness on the animal slaughter.

“My right to free expression has been taken away,” I’m only going to demonstrate there (in Sydney and Melbourne).

The activist is acting after receiving a banning notice for storming a restaurant in Perth on June 4.

The protester, who is from Perth, demanded that customers cease eating meat while playing noises of animals being butchered.

The animal activist intends to challenge the state-wide ban and believes that the barring notice was used to “suppress” her.

I did speak with my lawyer the other day, and I’m considering appealing the barring notice because I think it is an unfair restriction of my ability to peacefully advocate for animal rights, Peterson said.

It’s absurd that a nonviolent demonstrator would receive a banning notice when there is no connection to alcohol.

“I’m the only one who received a barring notice that night, despite there being some irate, violent people there.”

Police and politicians in Western Australia have referred to Ms. Peterson as “Australia’s biggest pest” as a result of her activities.

For her semi-naked protests in upscale shops, eateries, and supermarkets, she has received multiple fines.

When a policeman requested her to cover her naked chest during one of her public rallies in May, she accused him of misogyny.

The vegan protester was seen in the video holding a sign that stated, “Kangaroos shot and joeys beaten to death for Nike shoes,” and was also seen wearing a onesie with a kangaroo tied around it.

Ms. Peterson was fined $3,500 by a Perth magistrate for marching topless through a Louis Vuitton store in Perth last August while covered in her own menstrual blood.

The activist has also invaded the pitch during an AFLW game while dressed as a cow, protested in the meat aisle of supermarkets, and yelled at customers while wearing a blood-stained apron in a KFC and Coles.

She also went on trial for a demonstration in December 2020 at the Boatshed Markets in Cottesloe, when she shouted at shoppers that cows were being raped for meat and dairy, appeared shirtless, and had her chest painted with a cow pattern.