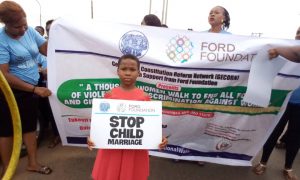 A call for women to be properly accommodated in the intending constitutional amendment has been made.

Gender And Constitution Reform Network GENCORN, a Non-Governmental Organization with support from Ford Foundation, made the call during a sensitization walk in Awka.

Queen Anigbogu reports that GENCORN is a coalition of different groups that advocate the rights of women and girls, with branches across Nigeria.

The one day sensitization exercise saw members of the group walk round some parts of Awka chanting songs of solidarity, holding placards with various inscriptions such as, “Stop Child Marriage”, “Stop Violence Against Women and Girls”, “Implement VAPP Law in Anambra Now”, No means No”, among others.

Speaking to the press after the walk, the Anambra State Coordinator of the group, Professor Ogugua Ikpeze, explained that the walk was to sensitize the public on the need for women to be properly accommodated in the intending constitutional reform.

Describing the Nigerian constitution as being gender-biased, Professor Ikpeze noted that the constitution should not be shrouded in ambiguities and misinterpretations but should be gender-specific, to enable for proper interpretation by the judiciary.

Professor Ikpeze, who is also the State chairperson, International Federation of Women Lawyers, FIDA, said  that the language of the constitution is masculine and has cultural provisions, which are obnoxious to women, and should be rewritten.

Also speaking the Imo state Coordinator of the group, Dr Mrs Rose Adiukwu, pointed out that the network is all out to make sure that the rights of women and girls are protected, and expressed happiness with the recent domestication   of Violence Against Persons Prohibition, VAPP, law in Imo state.

In their separate remarks, a member of the group, Mrs Ugochi Ehiahuruike and the Public Relations Officer of FIDA, Anambra State, Mrs Amara Mojekwe, called for the enforcement of the VAPP law in Anambra State, noting that they are all out to protect the female gender from sexual abuse and all forms of discrimination.

Lending his voice, a supporter of GECORN, Dr Dennis Ekemezie, asked that the Supreme Court judgement on female right to inheritance should be domesticated across Nigerian States.