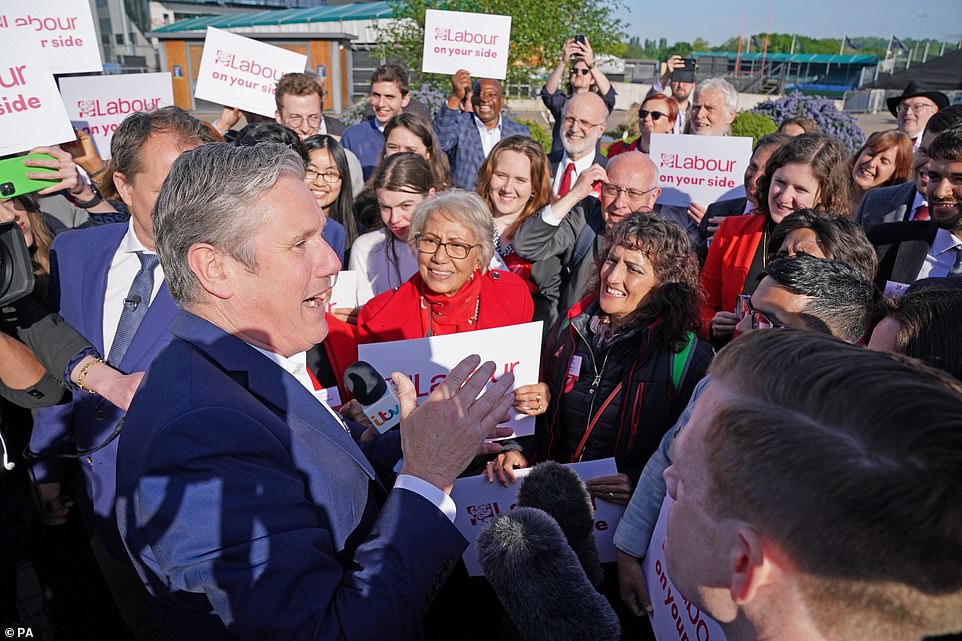 The Conservatives suffered a net loss of almost 500 seats as the ‘revolt of the upper to middle class’ culminated in a bruising set of local election results for the Prime Minister.

Ministers conceded it had been ‘tough’ for the ruling party, particularly in the south of England where it lost ground to Labour in London and the Liberal Democrats in its ‘blue wall’ heartlands, but warned against extrapolating the results on a national level.As some 490 losses trickled in throughout the day, Tory figures continued to publicly raise the prospect of Boris Johnson being replaced as party leader as one senior pollster suggested middle and upper class voters had distanced themselves from the PM after his fixed-penalty notice for breaking Covid laws.

As well as concessions in the capital and areas where support is traditionally strong, the party also sank to third in Scotland and lost its only Welsh council.

Labour, which is facing its own difficulties after police announced a probe into whether leader Sir Keir Starmer broke lockdown rules last year, said the result had been ‘shattering’ for the Conservatives. The party gained 139 seats but may have hoped for more, particularly when seeing the Lib Dems make 222 gains.

A Labour spokeswoman said: ‘Boris Johnson was on the ballot paper and the British public has rejected him.

‘The question every decent Conservative will be asking themselves is how much further are they willing to fall for a man who never fails to put his own interest above his councillors, his MPs, his party, and his country.’

Tory peer Lord Hayward said there had been a ‘revolt of the upper to middle class’ against Mr Johnson’s leadership.

Speaking to TalkTV, the election analyst said it was the ‘university educated, managerial, Remain-oriented groups who have defected’, while long-term Conservative supporters had stayed at home during the local elections.

The former MP said the losses were likely to ‘add to the unease’ over the allegations of coronavirus rule-breaching parties in Downing Street, with the potential of difficult by-elections in Wakefield and Tiverton and Honiton still to come.

‘There are a series of hurdles that Boris Johnson has got to face, and there is no question he was an issue, and a big issue, on the doorsteps – in some parts of the country more than others,’ Lord Hayward added.

Earlier on Friday, David Simmonds, the Tory MP for Ruislip, Northwood and Pinner, said ‘a change of leader’ could be one way of restoring public confidence in the Government after admitting the so-called partygate had been brought up by voters.

But farming minister Victoria Prentis said the Mr Johnson had developed a strong reputation as a winner and argued it was ‘too early’ to say he had hindered the party’s performance in Thursday’s poll.

Conceding the results in some areas had been ‘tough’, she told BBC’s Newsnight: ‘I think it is important that we should keep remembering that these are local elections … and we shouldn’t try and extrapolate too many national trends.

‘I know it is very tempting but there are very low turnouts in many of these elections and I think it is very hard to make real concrete guesses as to how (the results would play out in a general election).’

An analysis for the BBC by Professor Sir John Curtice calculated that if the whole country had been voting, Labour would have gained 35% of the vote – five points ahead of the Tories on 30% – the party’s biggest lead in local elections for a decade.

Labour’s most striking gains came in London where it took the totemic Tory authority in Wandsworth, won Westminster for the first time since its creation in 1964 and clinched victory in Barnet.

The Tories, however, managed to snatch Harrow from their red rivals, providing a silver lining to their woes in the capital.

Sir Keir’s outfit also took Southampton from the Conservatives and Worthing in traditionally Tory West Sussex from no overall control.

Monmouthshire, the only Conservative majority-controlled council in Wales before polls opened, went to no overall control, with Labour becoming the largest party.

The Tories also dropped into third place in Scotland behind the dominant SNP and a resurgent Scottish Labour.

But despite the celebrations, Labour found the result overshadowed by Durham Constabulary announcing officers will investigate whether a beer and curry event last year in Durham attended by Sir Keir and his deputy Angela Rayner breached Covid regulations.

Sir Keir insisted again that no rules had been broken after the force stated an inquiry was underway following receipt of ‘significant new information’.

The Liberal Democrats and the Green Party both enjoyed a strong election showing, finishing Friday’s counts with 189 and 81 net council seat gains respectively.

After full results were declared from 196 councils across England, Scotland and Wales, the Tories had lost control of 12 authorities and suffered a net loss of 398 councillors.

Labour had a net gain of eight councils and more than 250 seats and the Lib Dems had gained five councils.

In Northern Ireland, Sinn Fein is on course for a historic victory in the Assembly election, after receiving the most first-preference votes.

It raises the prospect of Sinn Fein holding the post of First Minister and will be sure to reignite debate around a united Ireland.

Mary Lou McDonald, president and leader of the party, told TalkTV she believed a border poll would be ‘possible within a five-year timeframe’.In Scotland, where the Conservatives fell into third behind the SNP and Labour, leader Douglass Ross said that voters had sent ‘a message to the Prime Minister’ over Partygate.

But speaking to journalists in Uxbridge, Mr Johnson stressed that the results were ‘mixed’ and not as apocalyptic as some had predicted.

He suggested that ‘Covid aftershocks’ were partly to blame for the backlash, arguing that the performance in the Red Wall had been far brighter.

Asked if he took responsibility for the results, Mr Johnson said: ‘Of course.’

He added: ‘It is mid-term. It’s certainly a mixed set of results.

Voting guru John Curtice said Labour still does not look in a position to win a majority at the next general election.

He pointed out that the party’s vote appears slightly down outside of London compared to the last time the seats were contested in 2018 – and crucially it did not make huge inroads in so-called Red Wall areas such as Hartelpool and Dudley.

Sir Keir visited Barnet this morning and claimed his party was ‘back on track’ after the Corbyn era, but the left-wing campaign group Momentum goaded that the figures were ‘distinctly underwhelming’ and had ‘gone backwards’.

No10 insiders jibed that Sir Keir could not even ‘dream’ of being premier based on this showing.

The Downing Street source also delivered a stark message to would-be leadership rivals, telling MailOnline it is ‘hard to imagine any other Conservative leader doing better than this’.

The biggest winners from the local elections have been the Lib Dems and the Greens, who have been taking seats off both main parties.

The Greens deprived Labour of overall control in Hastings, while the Lib Dems will form the majority on the new Somerset unitary authority.

Some senior Conservatives warned that Mr Johnson had been the fundamental problem on the doorstep, and ministers are anxious. ‘There is serious unease. They know that Boris was the issue,’ one veteran campaigner told MailOnline. ‘It wasn’t policies, despite the cost-of-living crisis.’

However, MPs have been relatively muted in their public criticism of Mr Johnson. Veteran backbencher Roger Gale and Defence Committee chair Tobias Ellwood, long-term opponents of the PM, suggested he should quit, while former minister Stephen Hammond said he must ‘prove his integrity to the country again’ and others called for a ‘reset’ of the government.

Cabinet ministers rallied round this morning, with Tory chairman Oliver Dowden blaming a mid-term backlash from voters and insisting the PM is the right person to lead into the next general election.

The PM was said to be pessimistic about his party’s chances of avoiding a drubbing before the counts began, with the BBC reporting he told aides: ‘We are going to get our a*** kicked tonight.’

But he was bullish on a visit to a school yesterday, saying voters had sent a ‘message’ to ministers to concentrate on the issues that matter to them.

‘The big lesson from this is that this is a message from voters that what they want us to do above all – one, two and three – is focus on the big issues that matter to them, taking the country forward, making sure we fix the post-Covid aftershock, get us all through the economic aftershocks in the way we got through Covid, fix the energy supply issues, that’s where the inflationary spike is coming, and keep going with our agenda of high wage, high skill jobs,’ he said.

He added: ‘That is what we are focused on.’

Sir Keir’s party lost Kingston upon Hull City Council to the resurgent Liberal Democrats, who made gains across the country.

It was a similar story for the Green Party who chipped away at Conservative and Labour seats in England.