Skip to content
Home » News » All News » Condolences for Gardee 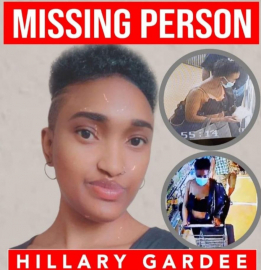 Minister of Social Development Lindiwe Zulu has conveyed government’s condolences to the family of former EFF Secretary General and Commissar, Godrich Gardee, on the passing of his daughter, Hillary.

“For [a] start is to really pass our condolences to the family of Gardee and the Economic Freedom Fighters (EFF) in general because we know that they will be there for him,” Zulu said when responding to member’s statements during a plenary of the National Assembly on Tuesday.

Hillary’s lifeless body was found abandoned outside Nelspruit in Mpumalanga after she went missing on 29 April.

According to a statement by the EFF, the death of the 28-year-old – who was born in Lagos in Nigeria and was Gardee’s first born daughter – has left the family distraught and the collective EFF leadership at a loss for words.

At the time of her death, Gardee was a part-time IT student at the University of South Africa while she ran her own IT business.

Zulu called for South Africans to unite against gender-based violence.

“This for us continues to raise the problem of gender-based violence in particular in violence in South Africa as a whole. But it also calls upon us, men and women, members of Parliament and members of our communities in general to really put aside all forms of political challenges and focus on this problem because whether we like it or not, it is something that shames all of us in general as South Africans.

“It doesn’t point a finger on any political organisation so our plea from the Department of Social Development, [is to] unite against this issue.