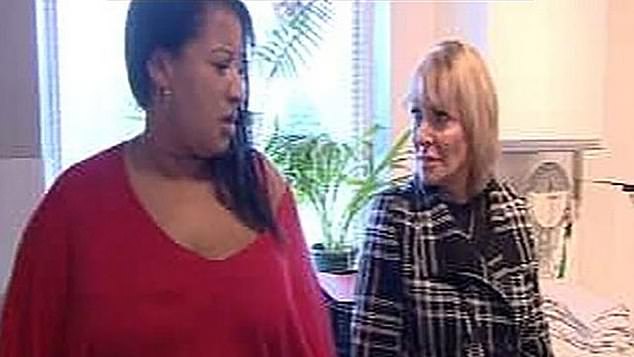 A government committee has voiced “disappointment” in MP Nadine Dorries for failing to retract remarks she made on Channel 4’s 2010 television show Tower Block of Commons regarding “paid actors.”

The Digital, Culture, Media, and Sport Committee published a special report on Friday stating that Ms. Dorries failed to review the evidence she presented regarding her participation in the Channel 4 documentary.

Dorries and three other MPs participated in the show, each spending seven days on a separate housing estate with a budget of £64.30, which was the weekly Jobseeker’s Allowance at the time.

Ms. Dorries, in her capacity as Secretary of State for Culture, Media, and Sport, spoke to the Committee in May, claiming to have learned that the actors in the 2010 show were paid.

She stated, “The parents of some of the boys in that program called me and came to lunch to inform me that the boys were enrolled in acting school.

They were not living in a real apartment; they were not genuine. They were, in fact, actors.

In addition, Dorries stated, “If you recall, I visited a pharmacist who cooked food; she was also a hired actress.”

Ms. Dorries advocated for the privatization of Channel 4 during her position as secretary of state. In September of this year, the administration announced that it was’reexamining’ the law, which casts doubt on the viability of the legislation.

The DCMS committee issued a report last week after Channel 4 and Love Productions conducted an investigation into her claims and found none to substantiate them.

The committee called her accusations “baseless” and expressed disappointment that Dorries had not addressed her errors.

Julian Knight, chairman of the Department of Culture, Media, and Sport, stated, “We recognize that witnesses will occasionally make mistakes, but it is absolutely important for the credibility of parliamentary oversight that these errors are rectified.”

‘We are dismayed that, despite being given multiple opportunity to reassess her stance, the former secretary of state has refused to acknowledge that her memories may have been incorrect.

People will be able to draw their own conclusions regarding the disparity between her claims, following correspondence with the committee, and Channel 4’s exhaustive inquiry.

Today, MP John Nicolson tweeted about the conclusion: ‘The cross-party Culture Committee on which I sit has released a report concluding that Nadine Dorries provided us with entirely incorrect testimony when she stood before us as Culture Secretary.

“Misleading the legislative body is grave. Our report has been submitted to the parliamentary authorities.

After giving her testimony, Dorries’ charges were investigated by the show’s producers, Love Productions, and Channel 4, who found no evidence to corroborate her claims.

Channel 4 stated in a statement that it “takes any charges of misrepresentation extremely seriously and always investigates such concerns thoroughly.”

The broadcaster stated, “The probe, which was reviewed by their external attorneys, included contributors who were members of the general public and with whom the secretary of state had extensive interactions.”

It required interviewing with a large number of individuals engaged in the production of the series, including contributors and staff, as well as acquiring and evaluating pertinent documents and footage, including 85 hours of raw footage shot for the series.

Channel 4 then evaluated the conclusions of Love Productions, conducting its own internal document searches and assessment.

Internal investigations uncovered no evidence to back the program’s assertions.

And the DCMS criticized her statements, requesting a response from Dorries.

However, she stated, “I detailed my participation in the program in my remarks to the select committee and stand by them.” I have nothing else to share at this time.

In a report published on 21 October by the DCMS, it was stated: ‘We do not find the original claims or the clarifications credible, and we have seen no evidence that Channel 4 and Love Productions utilised actors in a reality television show.

In contrast, Channel 4’s exhaustive research gives us confidence that her assertions are unfounded.

“We are concerned that Ms. Dorries appears to have used the cloak of privilege to disparage Channel 4’s reputation.”

“Had Ms. Dorries remained secretary of state and pursued a policy of selling the channel, we may have sought a referral to the privileges committee. However, as her claims have not impeded the committee’s work and she no longer has influence over the future of Channel 4, we are publishing this report to allow the House and its members to reach their own conclusions.”

The committee stated in its report that as she is no longer a minister, a thorough investigation into her behavior was not conducted.

Ms. Dorries stated to HuffPostUK, “I would like to know how much public money was spent on this utter rubbish”

Dorries described Channel 4 News as “edgy” and stated that the show had not done itself “any favours” in terms of impartiality prior to the report’s release.

Ms. Dorries was questioned during a Digital, Culture, Media, and Sport (DCMS) Committee hearing on internet safety and public sector broadcasters about her thoughts on the program and the future of Channel 4 after the government announced plans to proceed with its privatisation.

She stated that she “cannot envision” a situation in which privately held Channel 4 will become partially or entirely subscription-based and suggested that any acquirer may be required to commit to a 10-year freeze on certain modifications.

Reportedly responding to eyewitness claims that former anchor Jon Snow yelled “F*** the Tories” at Glastonbury Festival in 2017, the Culture Secretary said, “I have appeared on Channel 4 News multiple times.” It is daring.

“I will not defend a news program whose anchor went on air hurling obscenities at the Conservative Party.”

Therefore, they occasionally did themselves no favors on the news broadcast, and I believe that is all I have to say about that.

She stated that a potential move by the streaming giant into advertising, as opposed to subscriptions alone, would have a negative effect on public service broadcasters like Channel 4.

Since its establishment in 1982 by Margaret Thatcher’s conservative government, the broadcaster has been wholly supported by advertising.

She stated, “I believe that attempting to paint a picture that Netflix is unsuccessful or struggling is probably a bit of an exaggeration.”

It has reached the point of market saturation, which is excellent for Netflix, but they will have to alter their business model, and they will likely revise it in a way that will make it much harder for public sector broadcasters who rely on advertising revenue.

In April, Netflix saw its first subscriber loss in over a decade, resulting in a 25% share price decline in extended trading.

Ms. Dorries stated that she “cannot envision” a scenario in which privately-owned Channel 4 will become partially or entirely subscription-based.

She told the committee, “As a public service broadcaster, it is not an option, that is not even a possibility.” I cannot imagine a situation in which it might occur.

Ms. Dorries noted that she “gets along pretty well” with host Cathy Newman and that she had been requested to appear on the show multiple times over the past two weeks, but had rejected.

Sarah Healey, secretary of the Department for Culture, Media, and Sport, defended her staff during the session after Scottish National Party MP John Nicolson questioned why public appointments in the department were “so frequently a shambles.”

She stated, “Clearly, I disagree with the premise of your question.”

We make the greatest number of appointments controlled by public bodies across the entire Government.

There are a total of 435 positions to fill among 41 bodies with regulated public appointments, which equates to roughly 90 appointments per year.

Nadine Dorries admits sharing her Netflix account with other households

The Culture Secretary, aged 64, has admitted to sharing her Netflix password with four other families nationwide.

According to her, four other people, including her mother, have access to her streaming service account in violation of the service’s terms and regulations, which state that customers must reside together.

She stated before the Digital, Culture, Media, and Sport Committee that the present subscriber arrangement is “very generous.”

She continued, laughing, “Am I not meant to do that?”

Sarah Healey, permanent secretary of the Department of Culture, Media, and Sport, stated, “So many people watch it in my home that I had to get the more expensive version.”

Mr. Nicolson drew attention to the stymied search for the next head of the Charity Commission and the “ongoing story of Ofcom,” which, according to him, culminated in the appointment of “an elderly peer who does not use social media, which seems extraordinary in 2022.”

Lord Grade, a 79-year-old Conservative peer and former television executive, was recently appointed to the broadcasting watchdog following a protracted procedure that had to be repeated.

Ms. Healey stated, “Obviously there have been a few instances, particularly with high-profile appointments, where things have not gone as quickly or efficiently as we would have liked over the past few years, but I do not believe that detracts from the excellent work that my appointments team does in processing over 90 appointments annually, the vast majority of them without any problems whatsoever.”

Ms. Dorries also stated that the advertising budget pool has “significantly shrunk” over the past few years and that a platform like Netflix would be an additional attractive prospect for advertisers and consequently competition for Channel 4.

In addition, she indicated that the assessment of the BBC’s financial model and the future of the license fee will commence “much before the summer holiday.”

She continued, “I expect it will take around six months, and I want to get it started as soon as possible; the terms of reference for the review will be announced very soon.”

Ms. Dorries stated that the BBC will not be charged for the review.

To avoid a ‘conflict of interest,’ the DCMS will instead pay for it, and the hunt for an independent chair will commence shortly.

Esme Wren, editor of Channel 4 News, stated, “Channel 4 News is worldwide acclaimed for the breadth and quality of its coverage, which ranges from the climate catastrophe to the Oscar-nominated documentary For Sama to the battle in Ukraine.

Since the beginning of 2022, Channel 4 News has witnessed the most growth in audience share among all the PSB’s national primary news programs, with a 43% year-over-year rise among younger viewers aged 16-34.

In the month following Jon Snow’s resignation, Channel 4 News announced its new lineup of anchors, including Krishnan Guru-Murthy, Matt Frei, Cathy Newman, and Jackie Long. We are also seeking a new presenter based in Leeds.’