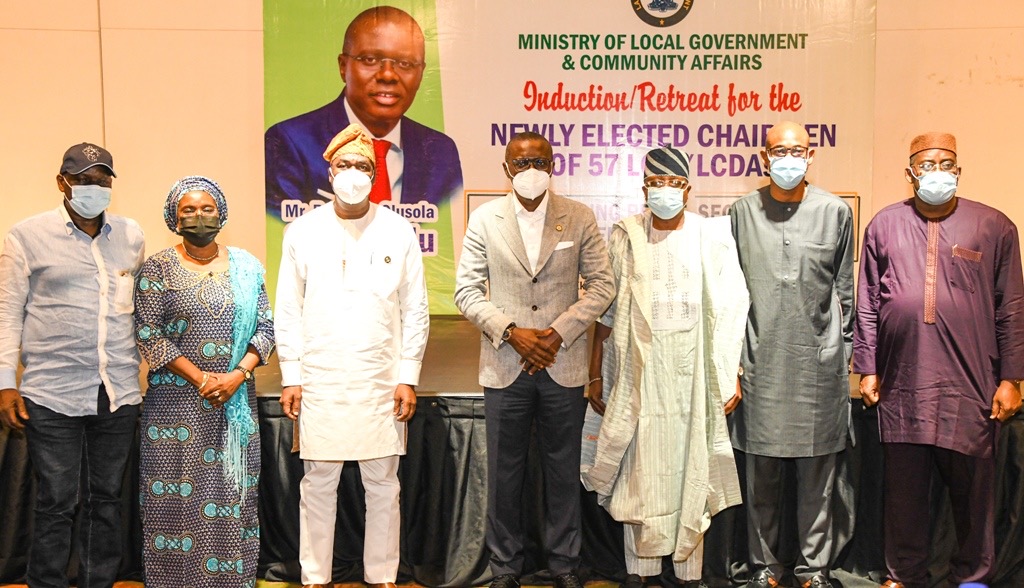 The recently sworn-in chairmen of the 57 Local Government Areas (LGAs) and Local Council Development Areas (LCDAs) of Lagos State have been fired up with a handful of advice from notable leaders in the State, as they settle down in their new roles.

At an induction organised for them by the Ministry of Local Government and Community Affairs, Governor Babajide Sanwo-Olu enjoined them to prioritise result-oriented programmes that will address poverty and accelerate good governance at the grassroots.

The Governor, on Thursday, joined leaders of All Progressives Congress (APC) in the State and members of the Governor’s Advisory Council (GAC) to counsel the chairmen and offer suggestions towards having a successful reign.

The two-day induction, with the theme: “Engendering Peace, Security and Development at the Grassroots”, is being held at the Eko Hotels and Suites, Victoria Island.

Sanwo-Olu reminded the council chairmen that the manifesto of the APC on whose platform they came to power gave priority to programmes focusing on development and people’s welfare, stating it was incumbent on the council chiefs to sustain the support, trust and confidence of the people by promoting purposeful, result-oriented and inclusive governance.

The Governor said the chairmen must align themselves with the timeless legacy of APC National Leader, Asiwaju Bola Ahmed Tinubu, and treat the baton of leadership handed to them with respect and dignity.

He said: “The critical role of the Local Government in facilitating the delivery of the dividends of democracy at the grassroots cannot be over-emphasised. As you settle down in your new positions, it is incumbent upon you to continue to earn the support, trust and confidence of the people by promoting purposeful, result-oriented and inclusive governance, a foundation laid out by our leader and benefactor, Asiwaju Bola Ahmed Tinubu.

“As leaders elected under the platform of the APC, you must be committed to following the direction and progressive ideology of the party as encapsulated in the manifesto. The party’s people-centred ideas and programmes have, over the years, been implemented meticulously at the Federal level and in Lagos to the admiration and satisfaction of our people, who, in return, have remained consistent and unwavering in their support and loyalty to our party.”

Sanwo-Olu urged the chairmen not to embark on projects that would not be beneficial to their communities, asking them to commit their statutory allocations to goals that would have great impacts on their various communities.

While enjoining the council chiefs to harmonise their policies and programmes with the State Government’s development agenda, known as Project T.H.E.M.E.S, for coordinated impact, the Governor advised them against playing politics with development, saying their tenure would be assessed by impactful development recorded under their leadership.

Sanwo-Olu said: “As Local Government Chief Executives, you have important responsibilities as Security Officers in your domains, serving as an early-warning security system for law enforcement and security agencies, and for the State Government.

“You must have your eyes and ears to the ground, working closely with local and traditional institutions, market, transport and artisan unions, youth groups, and religious organisations to defuse those seemingly minor tensions that have the tendency to blow up into unmanageable situations.”

Sanwo-Olu gave a progress report on the 377 projects kicked off last year by the State Government across Lagos’ 377 wards, disclosing that the projects were at 70 per cent completion.

Deputy Governor, Dr. Obafemi Hamzat, intimated the council chairmen on contemporary challenges facing leaders across the world, noting that there had been a growing resentment towards leaders perceived to be anti-people in the discharge of their duties.

Hamzat, who spoke on “The challenges of leaders today”, advised the chairmen not to create void between themselves and members of their communities.

“Every council chairman must understand their localised challenges and realities through which they will constantly engage the people,” Hamzat said.

GAC chairman, Prince Tajudeen Olusi, who served as councillor in the colonial era, described council chairmen as “fathers” of their communities, stressing that they must prioritise the welfare of the residents and serve the people to the best of their ability.

The chairmen, Olusi said, now shouldered enormous responsibilities, pointing out that their election was a call to service and you have the responsibility to put the name of the party in good light.

Oba of Lagos, Rilwanu Akiolu, likened the job of council chairman to that of a policeman, which is, he said, mostly not appreciated by the citizens. He said only the development initiated by the council chairmen would stand them out for people’s recognition.

The monarch cautioned the council chiefs against chasing after wealth to the detriment of their community members, saying such an attempt would taint their tenure and embarrass their political party.

Commissioner for Local Government and Community Affairs, Dr. Wale Ahmed, charged the chairmen to show good attitude, saying their performance would reflect on the image of the party.

He said the retreat was organised because the Governor considered it important to provide the platform for productive interaction between the State Government and leadership at the grassroots.

Chairman of Bariga LCDA, who doubles as chairman of Conference 57, Hon. Kolade Alabi, described the event as “symbolic”, as it was the first time council chairmen would be having such interaction.

He pledged, on behalf of the chairmen, their commitment to the party’s development programmes and collaboration with the State Government.