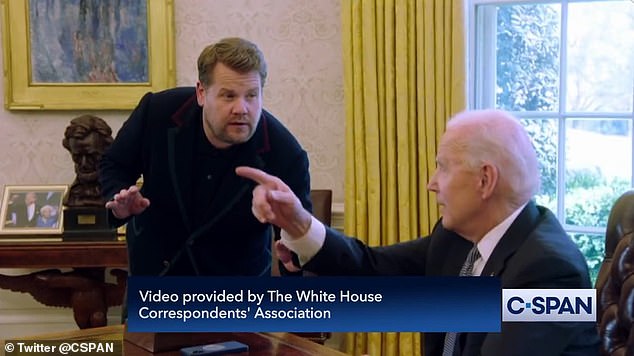 Comedian James Corden opened the 2022 White House Correspondents’ Association Dinner with a sketch of him taking over the duties of Press Secretary Jen Psaki, which included a cameo from a reporter she regularly clashes with, Fox News’ Peter Doocy.

Among them was Doocy, who Biden was recorded calling a ‘stupid son of a b****’ in January, with Psaki echoing similar remarks earlier this month.

Despite the critical comments from them, Doocy played his part in Corden’s sketch on Saturday, appearing straight-forward and no-nonsense as he took on the fumbling comedian.

‘Well you know what, David,’ Corden says, appearing fed up by the questions from all the reporters.

‘And I’m stood up here and you’re sat down there – unless you wanna be sat at the back with whoever they are’ Corden added as he threatened to move Doocy to the far-end of the press room.

Corden’s sketch also involved digs at the Biden administration as Psaki told him that the CDC is ‘good,’ to which he replies, ‘Really? ‘They’ve been pissing me off.’

Psaki also tells him that the economy is strong, with Corden again questioning the validity of the statement.

‘Is it,’ he asks doubtfully as Psaki moves on to the rest of the briefing.

The Daily Show Host touted Biden for coming out to the event on Saturday, saying he doesn’t know why the president would miss a chance to hear all about his supposed accomplishments.

‘You know, I think ever since you’ve come into office, things are really looking up. Gas is up. Rent is up. Food is up. Everything,’ Noah joked about inflation, which is at the highest it’s been in 40 years.

‘[If] Trump was the original Terminator, DeSantis is like the T-1000,’ Noah said of the Florida governor. ‘You’re smarter than him, you’re slicker than him, you can walk down ramps.

‘Because you see, Trump said he won the election, but everyone was just able to look at the numbers and see he was wrong.

‘That’s why Ron DeSantis is one step ahead,’ Noah said, referencing the fact that Florida tossed out 41 percent of the 132 math textbooks submitted for the next school year, more than half of which the state said referenced Critical Race Theory (CRT), with the rest containing Common Core and Social Emotional Learning (SEL).

‘First you ban the math textbooks, then nobody knows how to count the votes,’ Noah quipped. ‘Boom, my man!’

‘Tonight, we come here to answer a very important question in everybody’s mind. Why in hell are we still doing this?’ Biden quipped as he took the stage in the room full of journalists and D.C. insiders.

‘I know there are questions about whether we should gather here tonight because of COVID. Well, we’re here to show the country that we’re getting through this pandemic. Plus, everyone had to prove they’re fully vaccinated and boosted,’ he said. ‘Just contact your favorite Fox News reporter they’re all here vaccinated and boosted.’

He then addressed his historically low poll numbers for the first time, claiming that journalists were the only people who were less well-liked.

‘I’m really excited to be here tonight with the only group of Americans have a lower approval rating than I have,’ Biden said.

The moment involving Corden and Doocy served as light-hearted humor in what has been an otherwise tense situation between Psaki and Doocy in the past weeks.

Psaki was in a live taping of the Pod Save America podcast on April 14 when she was recorded crticitizing Doocy and Fox News, saying: ‘He works for a network that provides people with questions that, nothing personal to any individual including Peter Doocy, but might make anyone sound like a stupid son of a b***h.’

The Press Secretary has since stressed that she was not deliberately attempting to insult the Fox News White House correspondent, but instead criticizing the news outlet.

Following the insult, Psaki tweeted: ‘Full video shows I also told a story about Peter’s grace last night and made very clear I was not being critical of him or any reporter at Fox, and instead was critical of the slant of some Fox topics.

‘He is doing his job. I am doing mine. We debate. We disagree. I respect that.’

President Joe Biden earlier this year was caught on a hot mic calling Doocy a ‘stupid son of a b***h’ after the reporter asked Biden if inflation was a political liability for him.

Despite the insults from the president and press secretary, Doocy has remained composed and said he would just like to move forward after he accepted Bidens’ apology.

‘My reaction was delayed because as you can see the Biden staff were ushering us out.

‘They were telling us thank you, time to go. It wasn’t until we went to the basement and then outside and then back to the press room that somebody said ‘Hey, did you hear with the president said about you?’